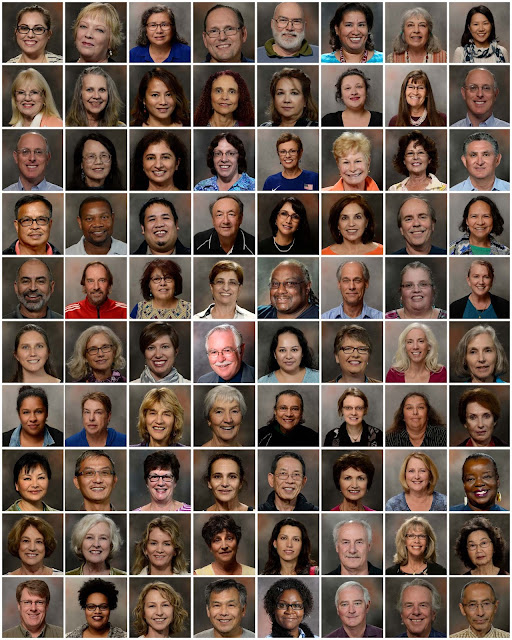 I was asked to make some photographs during our first school-wide retreat. This would have been a rare opportunity to make some reasonably good images of the administration, staff, and instructors at a single setting. It didn't quite work out that way, because it was never fully explained to the staff that photos would be made, nor was it made clear what they would be used for. In reality, they were to be headshots for our web page. As a result, many were casual in their appearance, with some men even forgetting to shave (24 megapixels and a decent lens have a way of show the tiniest missteps in grooming).

By the end of the day, I missed fewer than a dozen. Actually, it's a miracle that I got as many as I did, since I was told on Friday that everything was under control and I wasn't needed to make these headshots. This changed on the morning of the retreat, when I was asked to get a photo of everybody in attendance, essentially taking over the job that was not mine to begin with.

I set up a "photo station" consisting of a background, a speedlight for a "kicker" (backlight) and one for a key (main) light using the equipment I happened to have in my car for just such a request. The actual shooting was accomplished by pulling people out of the lunch line, making the photo in about a minute, and returning them to their proper place in the queue. Needless to say, two additional shoots were scheduled to capture those who had escaped the request to be "shot". With the project essentially done (I'm only missing two or three part-timers), I can catch my breath and make a plan for future shoots. Here's the take-away:


Glasses: Glare is a common problem, which I solved by placing my main light (speedlight with a shoot-through umbrella) just above my camera. This gives a soft light which tends to be very forgiving so far as glasses are concerned. I've had far more problems with shadows across the eyes (Photo #1). In the future I'll be sure that my subject's glasses are properly placed, high on the bridge of the nose. Another thing: Since I had not arranged for a fill light, the shadows are fairly deep, as you can see by examining the shadow beneath the jaw. You can also see the effect of the "kicker" light on my subject's shoulders, and on the hair.

Cropping: On my first shoot, I tended to crop  my subject's faces tightly by zooming in. But when working with such a tight schedule, a looser crop would have given me some leeway for cropping in post. Incidentally, all of the shots were made in landscape mode, and cropped square for a purpose: As presented, they are ideal for thumbnails. Cropped to an 8 x 10 aspect ratio, they can be used as an "official", but informal, portrait.


In Photo #2, represents everything going right. First off, I dedicated a third speedlight to illuminate the background. This gave me the option of making the background as light, or as dark, as I wanted it. Next, I positioned a reflective panel just below my subject's face, which gave me enough bounced light to bring detail the shadows below my subject's chin. And finally, I stood on a box to bring my camera to my subject's eye level (she's a good deal taller than I am).

Necklines: Luckily for me, this high neckline forms a natural border to draw the viewer's attention to my subject's face. If asked, I suggest that my sitters wear relative high necklines and jewelry that doesn't dangle too far down. I think that everything came together for this photo.

Portrait Pro: I hardly used this program until now. Basically, the software analyzes the facial features it locates on the image (nose shape, hairline, eyes, exact location of the irises, cheek and jaw contours, and location of the eyebrows), and proceeds to strengthen the jaw line, narrow the chin, brighten the eyes and teeth, intensify the iris color, and remove all hints of texture from the face. Pores, wrinkles, and lower eyelid puffiness are reduced, or completely removed, if you desire. There's the option to dial back the corrections, which I frequently did.

Staying At Eye Level: It is important to stay as close to eye level as possible.This keeps the plane of the face parallel to the sensor plane, and lessens any negative effects from foreshortening. You can raise or lower you shooting position for effect, but this perspective is exactly what you expect if you were talking to this subject, face to face.

Tall Subject, Short Photographer: I had a problem during the first session. I stand 5'6" and was photographing a subject who was 6' plus. Because of the short working distance, I was essentially photographing "up his nostrils". To fix this, I put the camera in Live Preview Mode, and simply held the camera above my head and level with my subject's face. I got the proper perspective without resorting to a stool or chair. Be sure to chimp each shot to be sure that you achieved proper focus. Incidentally, the feature is much improved since my first encounter on the Nikon D300.

If I had it to do over, I would have had my subject (Photo #3) lean forward, towards me, and raise his chin slightly so the plane of the face was again parallel with the sensor plane. This would have reduced the bulk you can see under his chin.

Short Subject, Tall Light: Photo #4 was taken minutes after #3, but with a very different effect. Notice that the shadow cast by the tip of her nose almost touches her upper lip, while the shadow in #3 is in it proper place. The difference? This young woman is on 5' tall, and the young man closer to 6'. This difference of about a foot  essentially raised the light source an equal amount, resulting in a much longer shadow.

Interestingly enough, the light was still in a position to provide some very bright catchlights. I was thankful for that, but am bothered by how deep my subject's eyes appear to be. I must admit that she happened to be a"blinker", so I started to concentrate on just getting a shot with her eyes open, forgetting to look at the overall appearance of the shadows. Under different circumstances this photo might pass for "art", but not here. I did have somebody hold the reflector under her face, but for some reason it didn't achieve the desired effect, probably due to the greater distance from the light source. Portrait Pro took care of eye puffiness, but couldn't do anything for the lids.

Tight Crop, Loose Crop: Towards the end, I favored a looser crop, feeling confident that 24 megapixels would give me all the detail I wanted, even when a landscape image is cropped portrait. In Photo #5, I decided to keep the Nike Swoosh and the American Flag in tact, as their inclusion gives you insight into the subject's athletic lifestyle. It could be re-cropped to better match the rest of the headshots, but that's an option I'll not exercise for the time being.

Posing: For this shot, I asked my subjects to lean forward slightly. I provided a table in front of them to steady themselves with. By having my subjects tilt their heads up, I was able to improve the appearance of the neck and chin.

Bifocal Lines: I was careful to position the head so that the bifocal lines didn't cross the subject's eyes. I'm still amazed at the level of detail I'm getting from the D600 and the 24-70 2.0 Nikkor. This wouldn't have concerned me during the film years. Amazing.

Kinky Pearls: This was the last shot made of the staff (Photo #6). She wasn't planning on being photographed, so she wore jeans and a black long-sleeved tee shirt complete with the name of a favored soccer team. I found a string of costume pearls I had used as a prop and had her put them on. Unfortunately, the were not properly strung and kinked at some of the knots, giving a broken appearance. Had they curved naturally, they would have made a perfect frame for her face while adding a touch of elegance. The placement of the kicker wasn't optimal, as her shoulders received not light at all. It's a hard thing to adjust on the fly, and when I ran out of time, I decided to just accept it, and be better prepared for the next time.

I learned a lot about the mass-production aspect of making headshots. And while I'm not looking forward to doing this again, I certainly feel better prepared.


Posted by Tom Jung Photography at 12:10 PM No comments: Links to this post

Phottix Ares Wireless Trigger Set: In David Hobby's blog Strobist, mention was made of an expensive starter radio flash trigger/receiver combination, the Phottix Ares Wireless Trigger Set available through Midwest Camera Exchange. I would have been tempted to buy a set had I not invested in three used Pocket Wizard Plus II transceivers purchased at a local camera store. I will freely admit that as basic triggers, both the Phottix and the Pocket Wizards perform the same functions, although the PW has a well-earned reputation for reliability and durability. The Phottix? Let's say that for now, they represent good value for the money, and with Midwest selling it, a better investment than those no-name disposables you find on eBay. To read Mr. Hobby's post, click here. 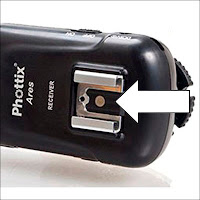 Now this is all well and good, but there is something you need to consider. If you have at least one iTTl Nikon speedlight, you might think twice about this particular unit. If you examine this tight crop of the image, you can clearly see that the hotshoe on the transmitter has only the single triggering contact in the center (see arrow). This means you will lose iTTL control if you mount the Phottix transmitter on your camera and mount the speedlight in the shoe.

Now let's look at the more expensive variation, the Phottix Strato II  which is currently available for Canon and Sony. One important line appears in the description:

The more expensive Strato II will allow full iTTL speedlight control with the appropriate speedlight, albeit not yet with the Nikon system. I suspect Midwest will add one to their product line at some point.

I'm surprised that the Nikon version wasn't in their initial lineup. This isn't uncharted territory, since Calumet sold such a unit before it went belly-up. My advice is to wait for the NIkon variation, since the few extra dollars can add a bucket of versatility.
Posted by Tom Jung Photography at 12:10 PM No comments: Links to this post