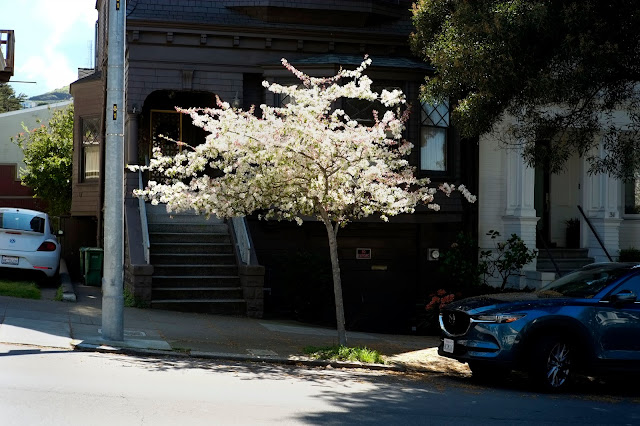 Doodling With A Camera: Working with the manual focusing 7artisans 35mm lens has been something of an awakening. I've decided to take it, mounted on a (lightweight) X-E1 body on this afternoon walk through Cole Valley, looking for and photographing color juxtapositions and patterns that I found interesting. I appreciated the fact that I didn't have to pay for film or processing fees just to experiment in color, so I didn't care that many of the photos I made were complete duds. Even a broken clock is right twice a day, and every once in a while, an image popped up worthy of inclusion in this post. 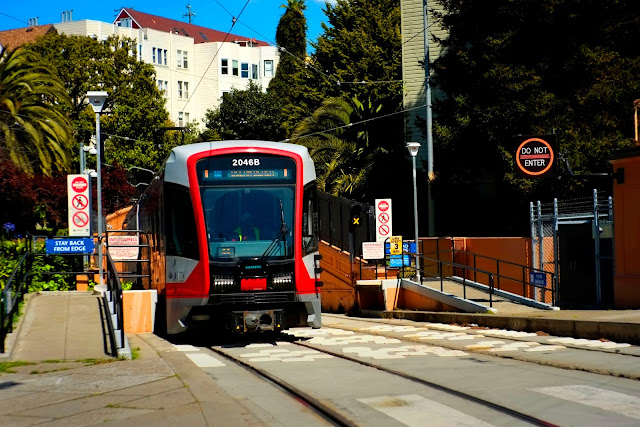 Manual Focusing Aids: The Fujis provide some interesting features to facilitate manual focusing. For that reason, one must decide exactly where the plane of focus is to be. Adding those extra seconds forces the photographer to make a conscious decision on which areas should be sharpest. 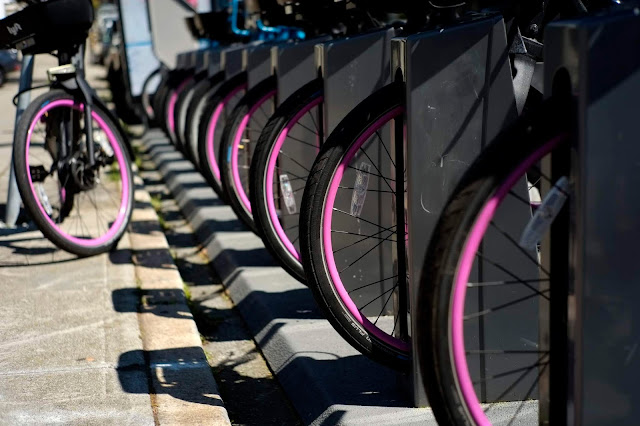 50mm Equivalent Focal Length? Meh. The  35mm focal length in an APS camera like the Fuji translates to the presumed "normal" lens (50mm) of the film camera years. Back in the day, the 50 was consider the base line of lenses. Anything longer was considered a telephoto, and anything shorter was considered a wide angle. This lens just wasn't long enough to allow for a perspective-compressing long shot, something that real telephoto lenses excel in doing.

Some years ago, many pro photographers (film) switched to a 35mm "normal" as their go-to lens. I personally choose a wider lens (28mm equivalent) as my go-to. If I'm working the street with a minimal kit, a Fuji X100T with a wide angle adapter that gives me that 28mm equivalent, will be the first camera out of the bag. So for me, wider is better. 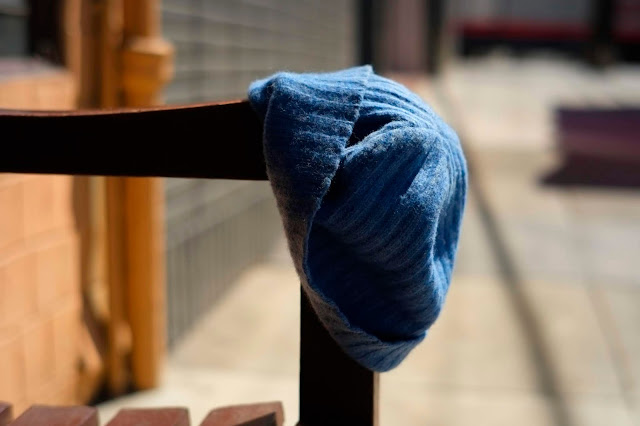 Hat On An Armrest: I'm not sure why anybody would leave a cap on the armrest of a park bench. But here it was, giving me a photograph with a nice sample with a smooth, out-of-focus background. The aperture setting was nearly wide open, if I remember correctly. Since the lens is manual and third party, it does not transmit exposure information to the EXIF file that accompanies the JPG image. Come to think of it, film never gave me that information either. 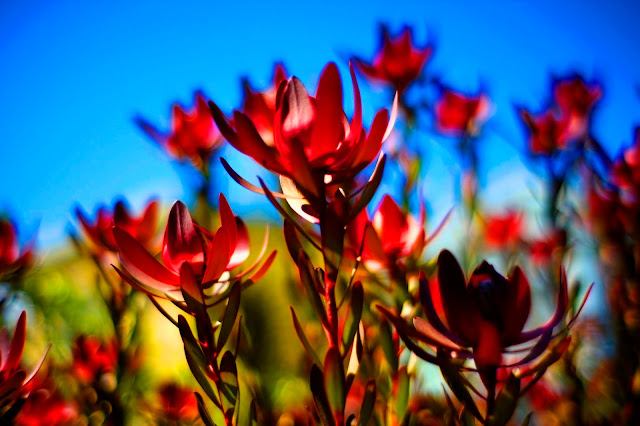 Blowing In The Wind: For this photo, I was playing with the Saturation adjustment in post production. The colors are off the charts in some respects, the sort you might expect to see from a plastic lens on a Holga camera. The X-E1 doesn't have the "toy camera" mode found on the X-E2 and later bodies, so I decided to make do with what I had. The vignetting (darkened corners) of the lens are apparent in this shot. Also, it's not that sharp. Hey, it's a cheap lens. Deal with it. I did. 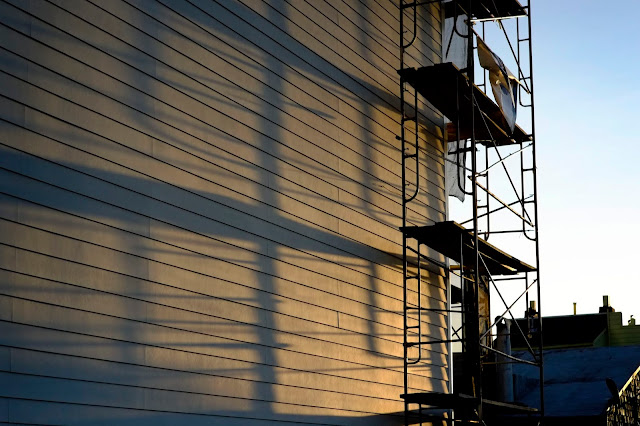 Morning Shadows: The next day, I brought the camera with me on my morning walk. I thought that the shadow of the scaffolding on the side of this house created an interesting pattern. 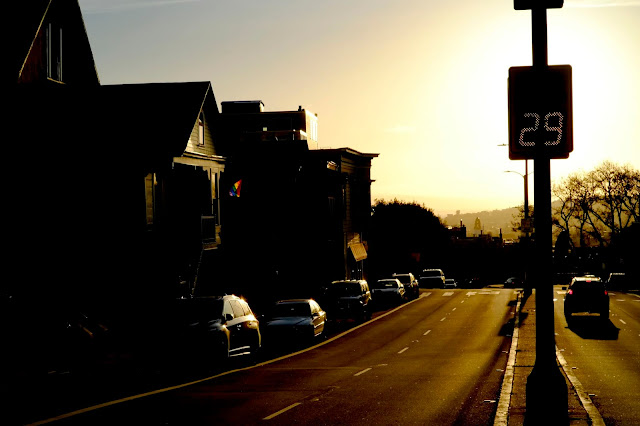 Speed Reminder: This photo shows upper Market Street at about 8:00am. The shelter in place order made cars and pedestrians scarce, and I need one for the speed reminder to light up. The light blinked to get the drivers attention when they exceeded the posted limit, so I shot in burst mode to be sure I got a few lit frames to choose from. I needed to dodge the "29" slightly to make it a little more visible. 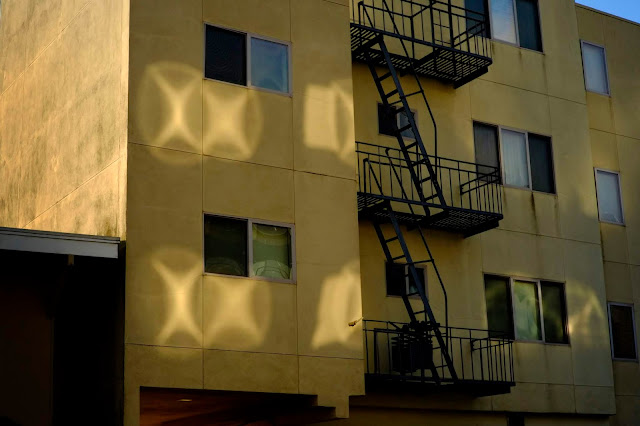 Reflections: Reflections can be strange. I'm facing south, and sunlight is reflecting off of the apartment building behind me. I have no idea why these reflections are so shaped, or why they are so consistent. I suspect they are from windows that are acting like convex mirrors.

This is as excited about photography as I've ever been, and it has given me a new challenge, and an old approach, to the craft. I'm anxious to see what my subsequent mornings, and lenses, will bring.
Posted by Tom Jung Photography at 12:10 PM No comments: Links to this post