Retirement: 2018 should be remembered as the year I retired. I officially left my position on June 30, 2018, and have enjoyed every minute of this new freedom.  It took a while to move all of my photo gear out of my office, and for the next year assessing my future equipment needs will be Job #1. Since I won't need to photograph large groups for the school, I may be selling my big flash equipment and my fabric backgrounds. But there is still time to see how things evolve, and decide later.

I've been giving a lot of thought to my occasional need for "more power" in the flash department. My trusty pair of Norman 200B flashes is used less and less, being replaced by two Godox AD200 flashes. I'm beginning to appreciate the capabilities these flashes bring. The advanced battery technology makes the units self-contained and super compact, and the bare bulb and the new round flash adding to the versatility. With each unit having the power equivalent of three Nikon SB-900s, these AD200s bring bring something I thought I'd never see - the capability of High Speed Synchronization (HHS) without having to employ multiple speedlights. This is something I never seriously explored because it wastes so much of the speedlight's power. Click here to read a summary on the relative light loss when using HSS and Nikon speedlights. But the AD200's abundant power might actually make this a practical field application, so I'll be playing with that in the future. Initial experiments have been very encouraging! 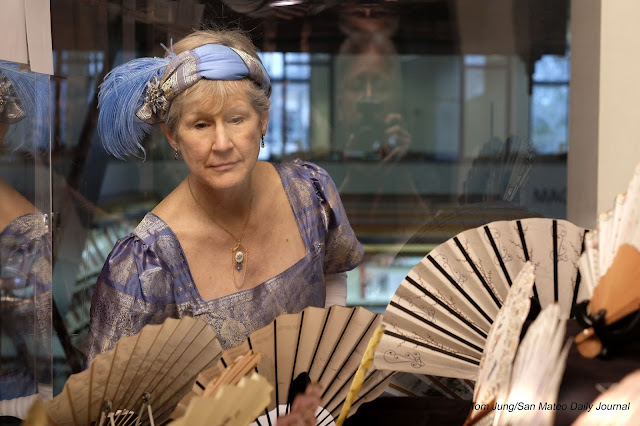 February 11 - Austinfest: Every year, a group of Jane Austin fans put on "Austinfest", a celebration of all things from the English Regency period (1811 - 1820), the setting for the popular novels of the time. This photo is a real head-scratcher because I haven't thought of a way to avoid my reflection. The problem is that I'm photographing through a sealed glass case, so there are two reflective surfaces to deal with. Still, it's a good photo of a participant in period costume examining a collection of antique fans. 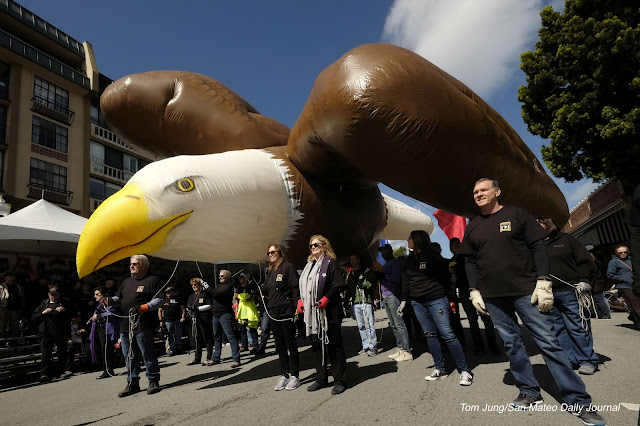 March 24 - 101 Airborne Appreciation Parade: A parade honoring members of the 101 Airborne meandered through downtown San Mateo. The climax was this bald eagle parade float, which I thought was a wonderful climax to the festivities. Alas, that was not to be. A graveside memorial photo was chosen instead. April 14: Tim Draper Throws A Block (Chain) Party: I did everything I could to make a photo with Tim Draper on stage and the Draper University marque behind him. This was my best effort to combine his taking the stage in front the the university itself. 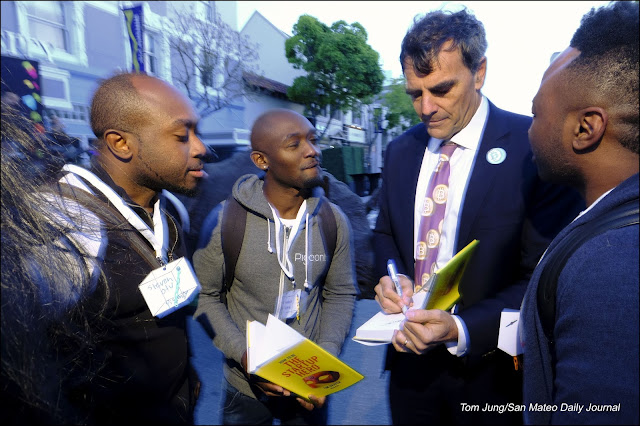 Mr. Draper was also signing copies of his book,  How To Be The Startup Hero, and these three young men, guests at the party, were eager to get their copies autographed.

In the on-line edition of the paper, these two photos were included, an indication that both contributed to the article they were made to accompany. 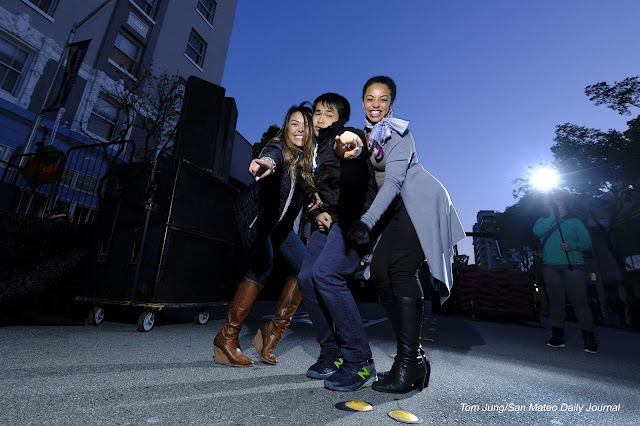 These three dancing Draper University students were most cooperative, so I experimented with a two-flash lighting solution. In this shot, the rim light, a radio-triggered flash on a monopod, gave the dancers a floor to stand on, while a hand-held, optically triggered speedlight was held high over my head in my left hand. The camera being held at ground level by extending my right arm. 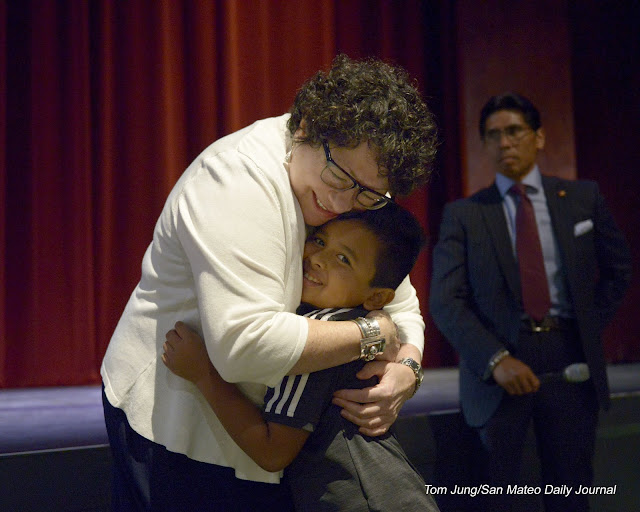 September 10 - Supreme Court Justice Sonia Sotomayor: My niece let me know that Justice Sotomayor was going to be in town promoting a new release of her biography re-written for a middle-school reading level. She made it a point of giving a high-five, a hug, or a handshake to anybody in the audience under the age of eighteen, and graciously answered any question posed to her. The lighting couldn't be improved, since I was working in a no-flash zone and under the watchful eyes of the U.S. Marshal Service. 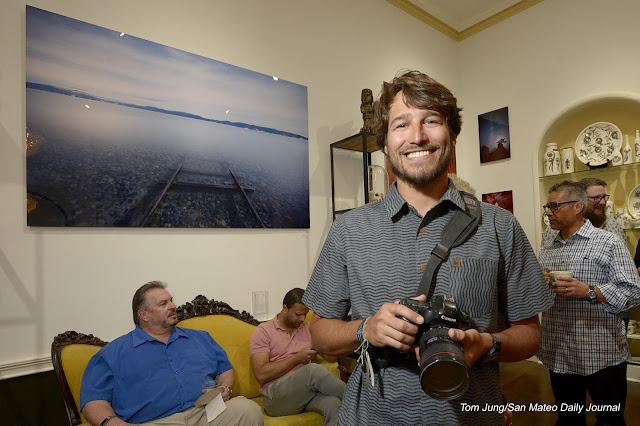 September 15 - Nick Cahill: Mr. Cahill's photograph of the night sky become the cover for an issue of National Geographic Magazine, and a local gallery had a showing of some of his work. I was reminded that white balance isn't always what it seems. The gallery had installed daylight balanced lighting (makes sense), but I walked in all set to do an incandescent shoot. All was saved when I stripped off the CTO gel from my speedlight and changed the white balance pre-set to daylight. 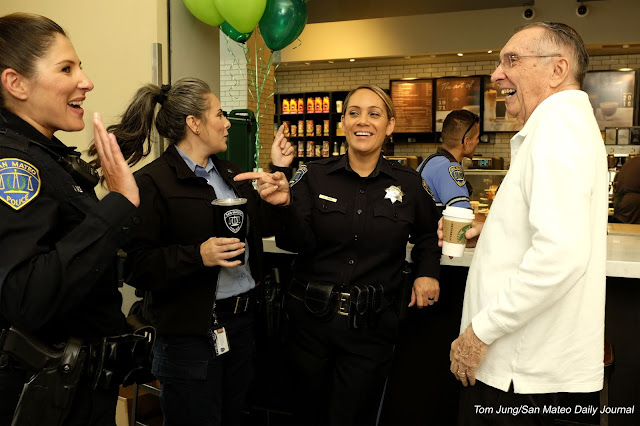 October 3 - Coffee With A Cop: The San Mateo Police Department makes it a point making its officers accessible by the public. In this animated photo, three officers joke with a Starbuck's patron. I believe that photos like this benefit from audible queues, since the t one in their voices signaled that a  joke was on the way. 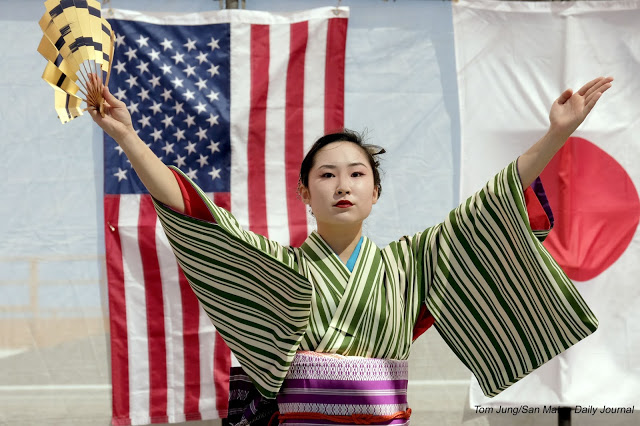 October 7 - Japanese Culture Day: I submitted two photos. The first (above) was somewhat contrived, but I made it anyway. In retrospect, it's only a young woman standing in front of two flags, a message that might have been too subtle. Oh well... 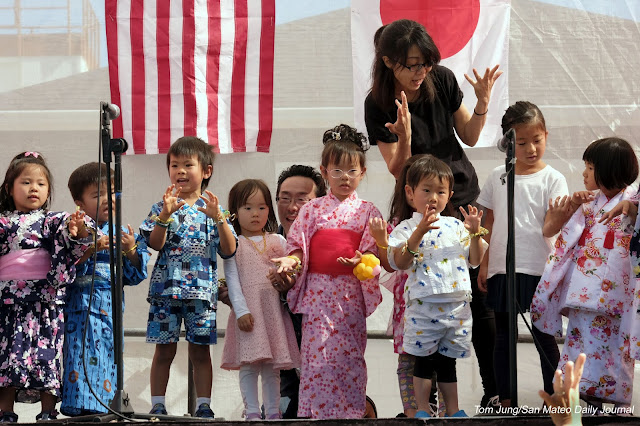 This second shot was submitted because it shows a bevy of cute kids, with a bit of action on the right side of the image. Cute enough to run on page 1. 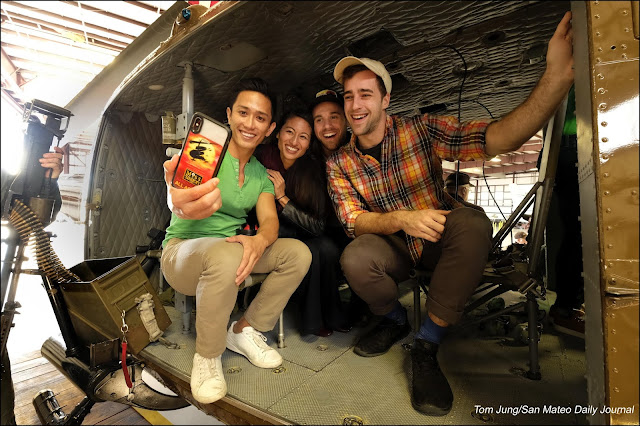 October 16 - The Huey: The cast of a new production of "Miss Saigon" was invited to visit a fully restored Bell UH-1 "slick", the iconic helicopter  of the Viet Nam War. These cast members decided to make a selfie while sitting in the chopper, and as luck would have it, the cell phone had the musical's distinctive setting sun logo. Doesn't get much better than that! 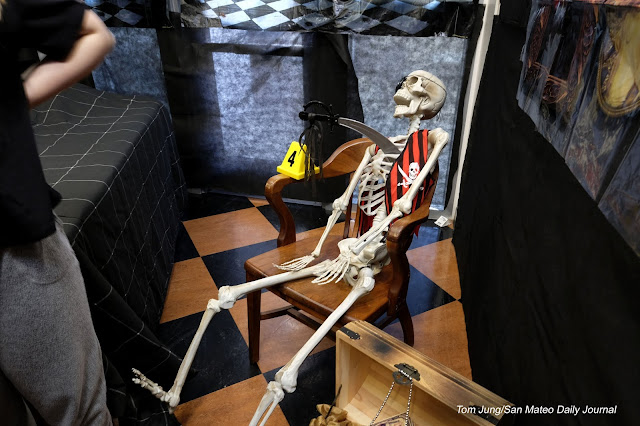 October 30 - San Mateo Coroner's Office Tour: Every year the San Mateo Coroner and Forensics Lab give a tour of the facilities designed to show school-aged children the role science plays in solving crime. The tour includes a visit to a macabre crime scene full of clues for solving the murder of this hapless skeleton. I thought the plastic sword between the ribs was a nice touch, and by combining a flash exposure for  the foreground and a lengthy exposure time for the background, I got a nice shot, even though I didn't submit it for publication. 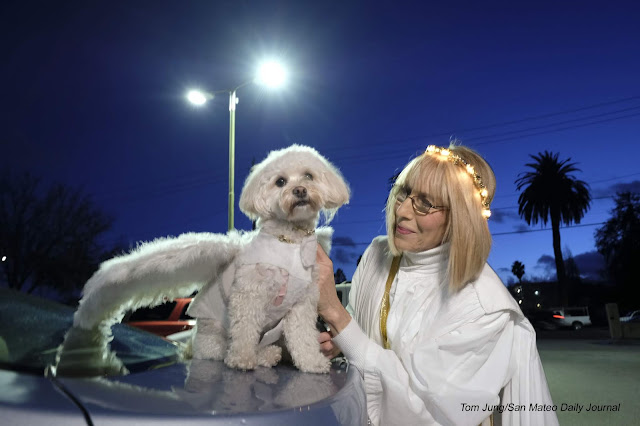 December 12 - Hometown Holidays In Redwood City:  Every year, Redwood City throws a parade and block party to celebrate the arrival of the Holiday Season. These two "angels" had just finished marching and were getting ready to go home. I purposely made the photo with the streetlamp in the background to suggest that my subjects were lit by a streetlight above them, when in reality I used a MagMod MagBounce mounted on a monopod held over my head. The photo doesn't shout "flash", and one photographer, on seeing the image, thought it was an available light shot.

If an identical opportunity comes again, I'll try to get the light pole away from the dog's back, so long as I can keep the silhouettes of the trees in the back. 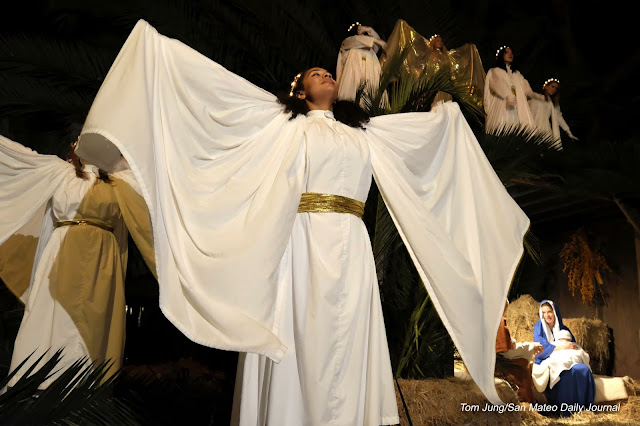 December 20 - Bethlehem 2018  AD: I made this photo during the dress rehearsal because if I waited until opening night, the shot wouldn't have appeared until the day after the event closed. This dancer from the Heavenly Host was positioned below the "angels on high", which allowed me to include them in the composition. I wish the dancer at the photo's left edge wasn't so close, but since her face couldn't be seen, did not present a visual distraction. The lighting was provided by a radio-triggered flash on a 10' tall light stand about 15' away from the subject. I could have extended the stand a bit further and increased the subject to flash distance, but something so tall in an environment so dark could be dangerous. If Cissie had been there to stand guard, that's the route I would have taken. 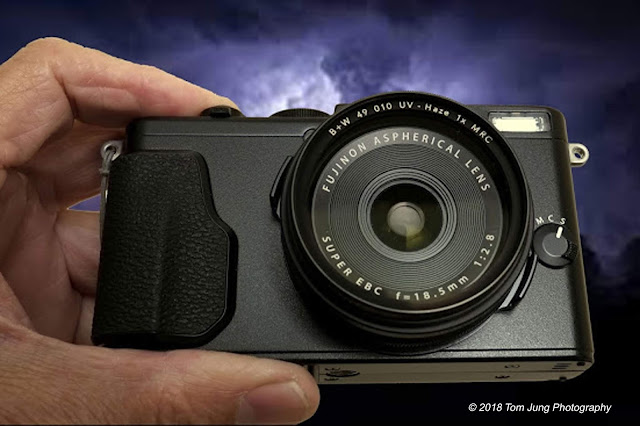 God's Gift To Photographers: Cheesy, cheesy, cheesy. I photographed a Fujifilm X70 on a white background, and using the Magic Wand in Photoshop Elements, erased the white and superimposed the image onto some storm clouds I found on the Internet. Nothing special, but the photo makes me chuckle. I don't really like  the hand position, but I was forced to hold the camera with my left while making the photo with my right. Not much room for improvisation!