Back To Basics - In The Field 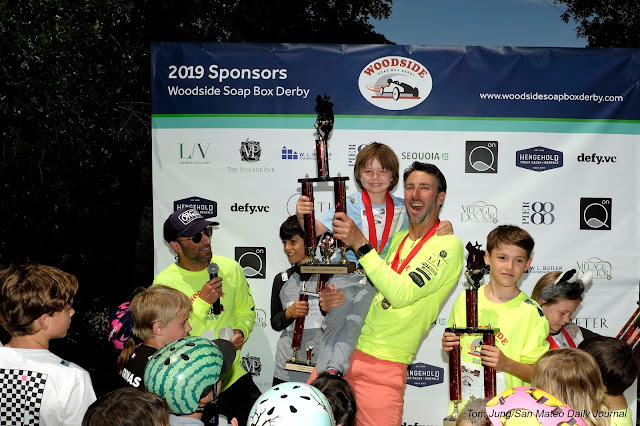 May 5 In Wooside: I took my minimalist kit to photograph two Woodside events: The Soapbox Derby, which I found by accident, and Historical Woodside Store, an annual recreation of country life in rural California during the 1880’s. Since these would be conventional assignments, it would be a good way to see if my wide angle / telephoto pairs could meet the challenge.

Up Close: Nothing beats a super wide angle lens, but when working outdoors, the flash synchronization advantages of the X100T's leaf shutter give the photographer a clear advantage when it comes to equalizing sun-lit highlights with flash-filled shadows.

From my track-side vantage point, the 28mm equivalent Fuji X100 couldn't give me as wide a view as my 10-24 zoom on an X-T2 body. However, this shot shows the potential of using a flash outdoors, and while the lighting isn't particularly attractive, the driver's expression is easily seen. Unfortunately, the officials in the background are looking back at the next racer, and this detracts the viewer's attention away from racer in the foreground.

Next time, I'll keep shooting in spite of the discouraging initial efforts, and see if I can improve my timing and composition. Holding the camera in my left hand while holding the (cabled) flash in my right hand would have improved the lighting considerably.

The Awards Ceremony: This was an easy shot to make, and full of detail. If I were make on suggestion, it would be to underexpose the image by 2/3 of a stop. Failure to do so will result in an overexposure of the highlights, which were properly preserved in this shot. Don't forget that the flash illumination is on top of the light already in the shadows, so a little bit of light goes a long way.  The distance was about ten feet, about the outer limits for a battery powered flash at F 11. But having a leaf shutter in the X100T makes that 1/900 of  second flash shot possible, something a conventional focal plane shutter couldn't accomplish without some seriously geeky equipment tweaks. 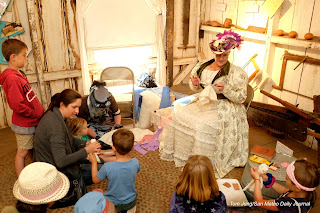 Making Rag Dolls: At the Old Woodside Store, two docents were showing groups of children how dolls were made from simple fabric scraps. The room was lit by an single, under-powered light bulb that hung from the ceiling, with some additional sunlight coming through a south-facing window. It suffices to say that there wasn't much ambient light to speak of, so I resorted to wall-bouncing the Godox 685 flash I brought for the occasion. Making a well-exposed photo wasn't the problem. Attempting to create a suitable composition was.

In this first sample, the overall composition was acceptable, but the photo had several shortcomings. First off, the mother and son grouping in the lower left drew the viewer's attention from the seated docent on the right. In addition, the gap between the seated children essentially cuts the image into two parts. Finally, the doll that the docent is making isn't recognizable as such, the brightness and coloration blending in with its background. 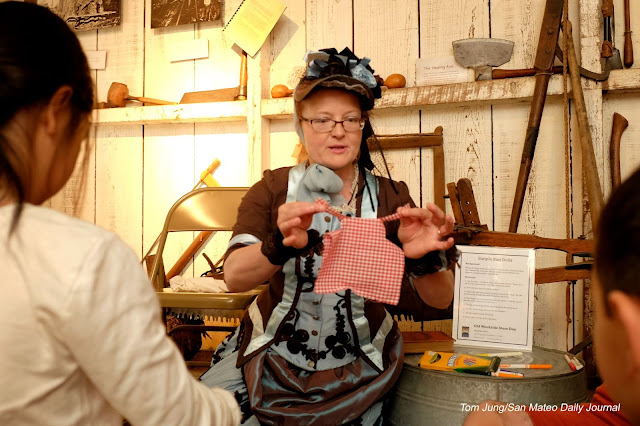 In the end, I chose to submit this image. The way the doll's garment is being held, the gaze of the docent, and the two faceless children created a better composition. I wish the docent was a little more animated, but I chose the photo's composition in favor of the expression.

Eating Pie: Statistically speaking, I am far more likely to choose a wide angle lens when I have the chance to work near my subjects. But in this case, I needed my short telephoto lens for the Pie Eating Contest.  These shots were made in the Aperture Priority mode, and choosing a relatively large shooting aperture gave me backgrounds that were pleasingly out of focus. I was thankful for the white paper table covering which provided enough reflected light to give detail to the shadows. Without it the photo would have had blown highlights or overly dark shadows, depending on which of the two extremes I chose to sacrifice.

When grabbing candid shots, it's too easy to concentrate on your main subject and forget that the edges will often add some context to the photo. Had I seen the expression of disbelief on this young man's face sooner, I might have re-framed the shot to included more of it. As it stands, I can be forgiven because this final crop included both of his eyes, although just barely.

All in all, my lens choices were satisfactory, although I wish I had some zooms for the actions shots. I felt some professional pride in making do with so basic a kit, and felt my cameras were up to the assignment. I was forced to re-think the single flash concept, and I'll discuss some additions I made in my next post. 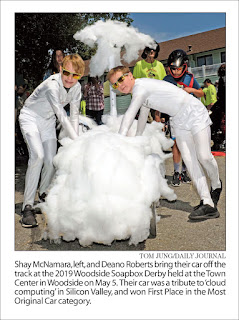 Postscript May 15, 2019: My editor ran this shot of these two soapbox racers whose car won the Most Original Car award. The photo of the docent holding the doll clothing was also submitted, but not used. I think this photo, taken outdoors with a flash assist, had more detail, better color, and most importantly, two happy kids.

Using a flash exposure to properly balance the existing daylight allowed me to underexpose the highlights slightly to prevent them from "blocking up". As a rule of thumb, under-exposed the sunlight exposure by 1/2 of a stop, while underexposing the flash an equal amount. Since digital cameras and lenses tend to be calibrated in 1/3 stop increments (the same as the ISO settings, coincidentally), just try to keep your settings near the 1/2 stop range.

One piece of advice from the film days, underexpose transparency (slide) film to maintain saturation in the highlights. Treat your digital exposures the same way.