In many ways, I've been planning this photo for several years. For the record, the visual elements I sought to capture included:

The overall exposure isn't perfect, as some detail was lost in the deep shadows of the SUV at camera right. Just the same, the presents in hand are clearly visible, so the activity was made clear. There are some limitations when a single bare flash is used to fill the shadows of relatively reflectively subjects, and those limitations will be addressed here.

To The Good:
To The Bad:

All in all, this was a pretty good result from a photographer working alone. Just keeping a flash held at the end of a monopod properly aligned was challenging. Feathering the flash more towards camera right might have helped my rightmost subject, and if Cissie were there, I surely would have. But she wasn't, and I didn't.

Change Of Venue: Once the presents had been brought indoors, I upped my ISO and started to shoot. Camera mounted flash, bounced high and behind me. One nice thing: Exposure isn't critical because bounced flash is low in contrast with a great deal of shadow detail. Some minor post production can be counted on to save underexposed images, This was meant to be a sketch photo made to fine-tune the exposure. The subject's expressions aren't good enough to make the photo a contender for publication, but I sent it along to the hospital, just in case somebody liked it.

Who Gets The Props? There were a lot of things going on -Santa was greeting children, a photographer was photographing, and finally, lining up for gifts. This shot was meant to be a shout-out to the staff and volunteers at the hospital.


That might be why the image wasn't published by the paper. 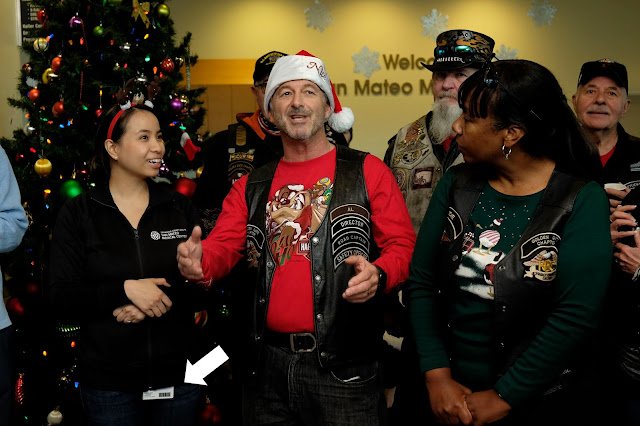 Out Of A Jam: I needed to identify the young woman on the left. I thought I had put her business card in my camera bag, but couldn't find it when I looked for it. Undaunted, I noticed that her ID badge was barely visible in this image, so I decided to zoom in close to see if her name was visible. 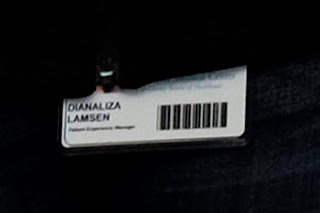 There is something to be said about sharp lenses and high resolution cameras. This ultra-tight crop gave me the information I needed.

I've spoken to a number of photographers about equipment, and what I considered the minimum requirements for editorial photography. Truly, this level of resolution wouldn't be needed for the usual "picket fence" and "face and a place" photos I'm usually asked to make. But in this case, the higher level of performance helped me out of an embarrassing fumble on my part.

Posted by Tom Jung Photography at 9:00 AM No comments: Links to this post