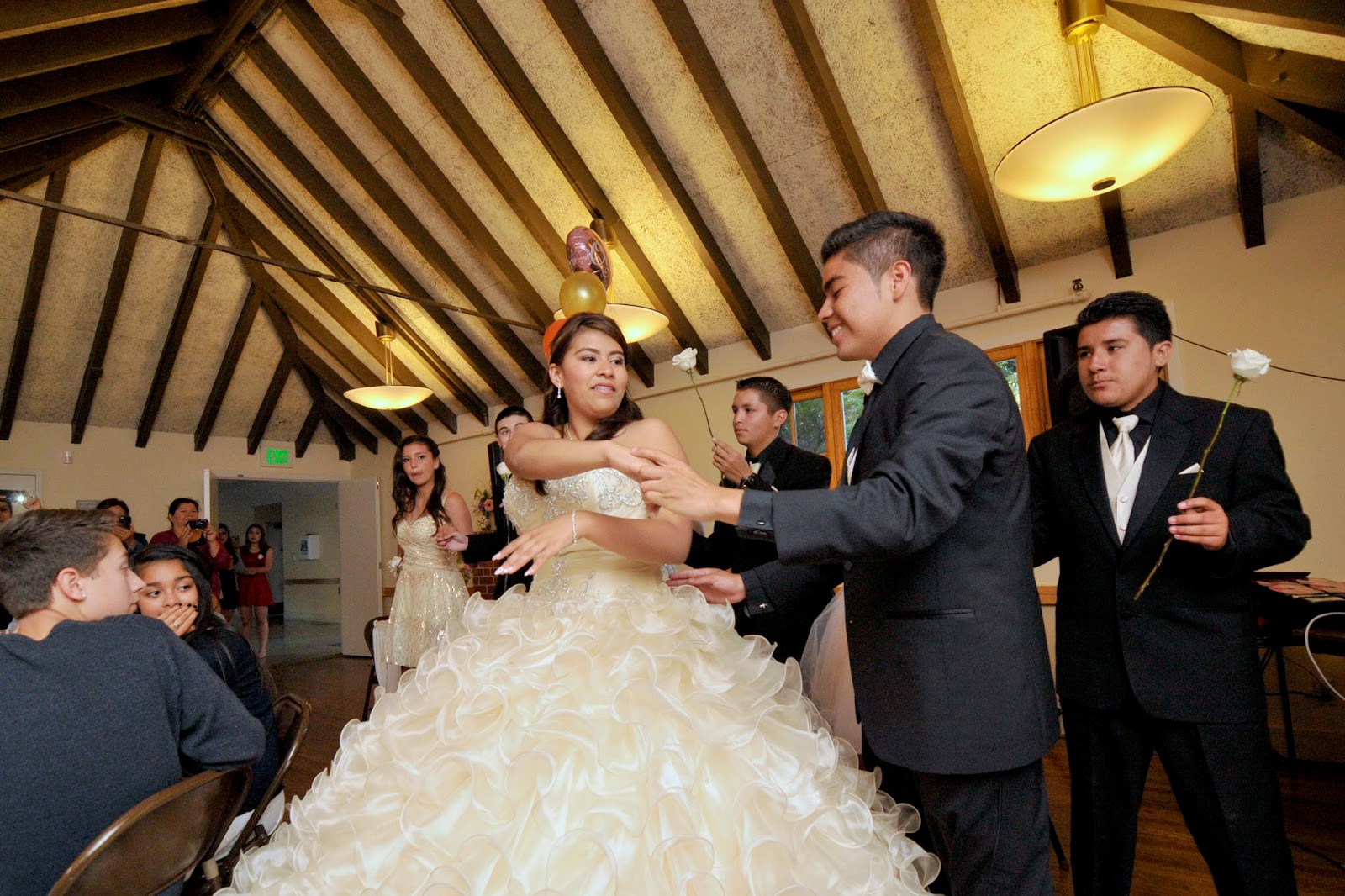 It was now party time, which gives a bit more opportunity to shoot in a more free-flowing style. From this point forward, the shots were more about the party experience.

Ceiling Bounce On The Dance Floor: This shot was done using a single, shoe mounted speedlight aimed at the ceiling behind me. I chose a low angle to include the beamed ceiling and an unusual backdrop for the dancers.The shutter was "dragged" to allow for a proper exposure of the ceiling "background". As is often the case, I'm working very close to the subjects and using a wide angle lens, so some distractions in the background are to be expected. I liked the fact that the lighting fixtures gave some visual highlights to the background, allowing the viewer to overlook the overall underexposure of the light colored ceiling.

I was starting to discover the advantages of using a SD-8a supplementary battery pack with my on-camera flash. With drastically reduced recycle times, fewer shots were missed waiting for the speedlights to fully recharge.

Light On A Stick Outdoors: The dance that my subjects had rehearsed was moved to an outside patio to give the dances more freedom of movement. I kept my two tandem mounted SB-900s ready to go, so it was a simple matter to convert my shoe mounted flash to serve to a SU-4 controller, which meant that I couldn't use iTTL to help in the lighting. Instead, Cissie made sure the lights were 10 feet (more or less) away from the main subject. This became something of an issue because I had to maintain a clear Line of Sight between the camera mounted Commander speedlight and the two speedlights on the pole, whose sensor eyes had been aimed towards the ground. This way, if I positioned the lights above (or nearly above) my head, I'd get reliable flashes. This didn't always work, since the constraints of Sissy's position made more dramatic angled lighting problematic. Next time, it's Pocket Wizards all the way!

In Photo #2, you can see that that the flashes provided all of the useful illumination for the photo. You can see that the shadows on the walls of the clubhouse are very dark. Gretchen and her father appear to have been "frozen" by the flash illumination, in spite of the relatively long exposure time. The incandescent lighting from inside the clubhouse adds little to the photo.

I decided to lengthen the exposure time to 1/10 of a second to get some meaningful motion blur in the photo, which I hoped would add some visual excitement (Photo #3). A welcomed side effect was the overall brightening of the surroundings. But the dragging of the shutter can be an iffy thing if you forget to set your camera to Rear Curtain Synchronization, since the subjects tend to float through their own phantom blur. In Photo 3a, you can see that I achieved mixed results. The arms appear to be moving, but the (camera) right edge of Gretchen's face shows more blur than I would have wanted.

Shortly after the formal dancing, Gretchen and her friends joined the party, and after dinner, the tables were moved back and the dance floor made ready for a less formal, more "kid friendly" celebration. Initially, the house lights were left on, so I used them as a backdrop for some candids, (Photo #4) just as I had done earlier.  Focusing was not an issue, as there was plenty of light for the camera's auto focusing to function properly. You can't help but notice how the "shoes" in the foreground were really distorted by the 11mm setting my my Tokina lens. But it couldn't be helped, since I had a solid wall of guests immediately to my back.
Pretty soon it was the adult's turn to dance, and the room lights were turned off. This posed a bit of a problem, as the lowered ambient light level required a bit more ISO, and intensified the effect of the wall sconces on the subsequent images. This last shot (Photo #5) now has a very different feel to it, and the effects of the relatively long exposure times gave me a bit more blur than I would have liked. You just play the shot where it lands.
Point And Shoot, 2014: To look at this last photo, you'd think that the room was dimly lit, and that there should have been enough light to focus. Not the case! The room was quite dark, actually, and those ultra bright lights in the back were accent lights mounted on the wall. This turned out to be a problem, since no matter which way I turned, I was facing one or more of these lights, making it difficult, if not impossible, to achieve focus lock.

The solution came from and old technique I used when film was the medium of choice. Since a practical autofocus would not be invented until 1981 with the introduction of the Pentax ME-F (reference), every manufacturer made efforts to make manual focus as easy as possible. In those days, all lenses had an easy-to-read distance scale, calibrated in feet and meters, visible from the top of the camera.  When shooting in near darkness, I would set the lens to seven feet,(a distance I could easily (gu)estimate), adjust the aperture for an appropriate flash exposure, and position myself at that distance from my subject. I would simply wait until something interesting was about to happen, and when it did, I simply raised the camera to my eye and made the exposure.

My workaround was to program the AE-L AF-L button to lock both the Auto Exposure and the Auto Focus. The external button can be programmed, I while AE/AF Lock is shown in the illustration, I normally set it to AF lock only, since I normally set my exposure manually.﻿﻿﻿

﻿﻿When I find myself in a really dark location, I will find something bright (a candle on a table, perhaps) and position myself five feet from it. Next, I'll partially depress the shutter release to let the autofocus lock onto the object. Finally, I'll depress the AE-L/AF-L button with my thumb, and then look for something I want to photograph. When I do, I'll position myself five feet away, depress the AE-L/AF-L button, and shoot. By holding the button down, the focus remains at five feet, giving me a reasonably well focused image. However, if you forget to depress the AE-L/AF-l button, you'll have to find another well-lit object five fee away, and start all over.


The whole Quinceanera experience was a lot of fun, and I enjoyed having the chance to adapt some old techniques to new environments. My single small regret is not setting the synchronization for "Rear Curtain", but that's an exercise for another day.
Posted by Tom Jung Photography at 12:10 PM No comments: