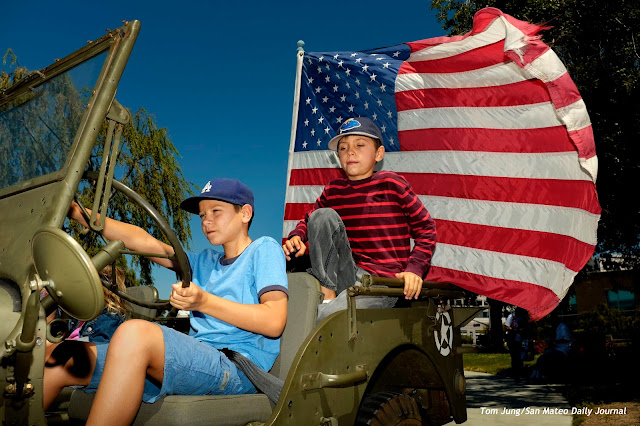 The Fourth of July was a non-assignment, which is to say I just decided to photograph an event to see what would come up. The Fourth is a big deal on the Peninsula, with parades and family events schedule in most of the large cities. The last Fourth of July photo I submitted was taken at the Redwood City parade, which is possibly the largest one in San Mateo County. A long lens and a fire engine full of smiles made the front page, and just like a fisherman going after bluegills, I wanted to try my luck again. Foster City's party was smaller, but is was closer, and I had things to do later in the day. 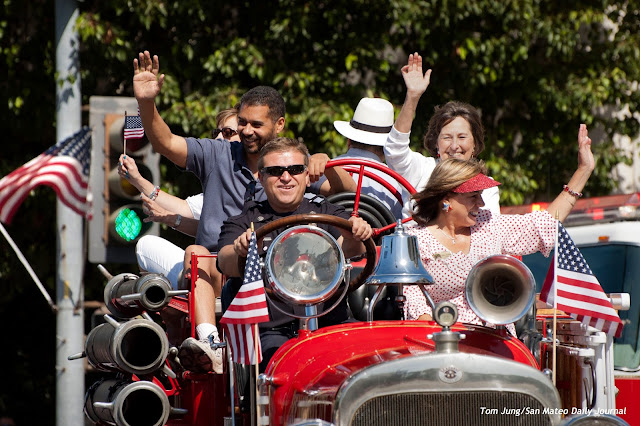 When looking for subjects, I try to incorporate as many contextual elements as I can find. Being the Fourth, this large flag caught my eye. It turns out that it was mounted in the back of a World War II era jeep, which turned out to be a magnet to these two boys wanting to get the feel of driving a real car without any of the hazards. 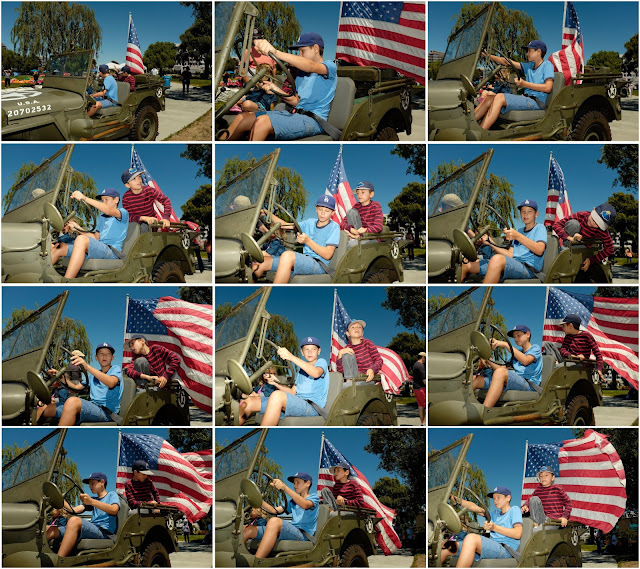 Commence Firing! This collection of twelve shots was taken during a four-minute period of time.Most of the shots reflect some part of my overall strategy of refining my shots when time permits. I didn't take an excessive amount of time on the project, but there are some clear benchmarks that I can remember. Viewing the images from left to right, top to bottom:

#1 confirmed that the shutter speed, aperture, and ISO settings would produce the darkened blue sky I wanted.
#2 reminded me to photograph the "driver" when his arm wasn't blocking his face.
#3 shows that the drooping flag was not very interesting.
#4 shows the benefits of a little brother getting into the back seat, but without the flag, it still falls short.
#5 reminded me that TTL isn't perfect, especially with the Fuji.
#7 showed me that if I could get the timing right, a gust of wind would open the flag to make an interesting backdrop. And in this case, cutting off the edge of the flag was a distraction.
#8 another TTL letdown, and the flag wasn't fully opened.
#9 - 11 is me shooting when my driver's arm was lower and there was a bit of wind.
#12 shows all the stars in alignment. The flag is at full width, the flash is behaving, and Little Brother was at least looking forward.

About Faces: I don't believe it's essential that the photographer and the subjects make eye contact. I tell my students that the difference between a posed photo and a candid is where your subjects are looking. Here, they're at least facing the same direction, which gives the image some purpose. Incidentally, this shot wasn't posed in any way, as they pretty much ignored me throughout the session.

Epilogue: With the photo safely in the queue, I can view it with a more critical eye. The lighting ratio appears to have reached the mythical 1:1, meaning that the shadows and the highlights are exposed to an equal extent, an impossibility when you consider the additive nature of light. If you examine the driver carefully, you can barely see the shadow line on his face (it follows the his left cheek line). I'll be the first to say that this photo isn't high art, but the visual elements I was trying to capture are all there. 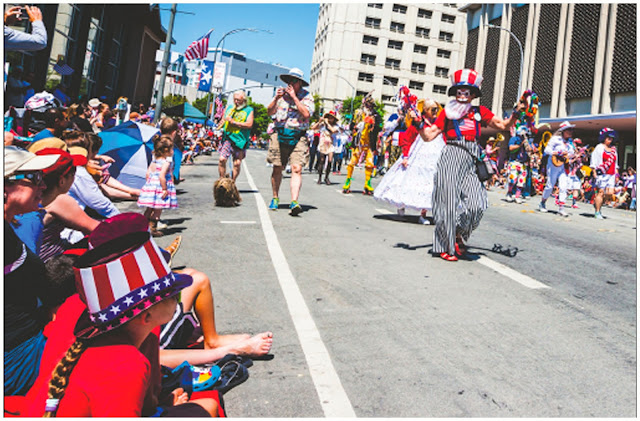 I Coulda Been A Contender! This photo taken at the Redwood City parade was featured on the front page of the July 5 edition. Due to a file delivery error, my photo didn't arrive soon enough to be considered. Instead, it found its way into the queue,and might possibly be printed one week later in the community section.

Here Today: The image appeared on Page 2 of the July 7 edition. This spot is normally reserved for a "shot of the day" from Reuters, I guess one could say that my photo was the best photograph in the world on July 6 when the edition officially went to press.Heh heh..
Posted by Tom Jung Photography at 12:10 PM No comments: Links to this post