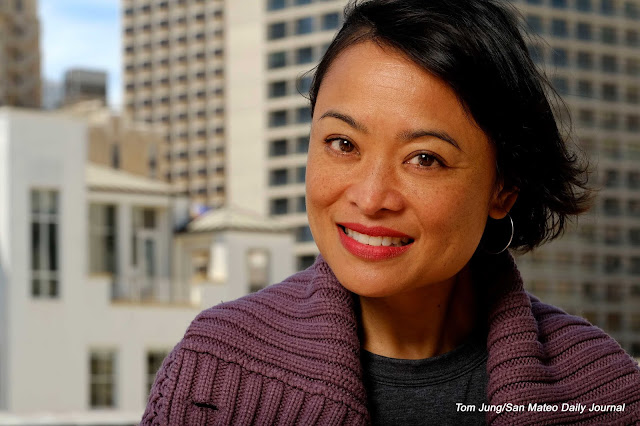 The Journal has started a series of profiles of entertainers who have roots on the Peninsula. Rona Figueroa was born in San Francisco and attended Mercy High School in Burlingame. American Conservatory Theater (A.C.T.) in San Francisco was presenting Rhinoceros, and Ms. Figueroa was cast as Daily, the movie's love interest.

Arrangements were made to schedule a twenty-minute photoshoot at the A.C.T. offices in San Francisco. When I arrived, Kevin gave me a quick tour of possible backgrounds for the shoot, and in the end selected the open balcony on the seventh floor. The weather was crisp, and gusts of wind kept the air clear of haze. Having arrived 30 minutes before the scheduled shoot, I started to set up the shot. 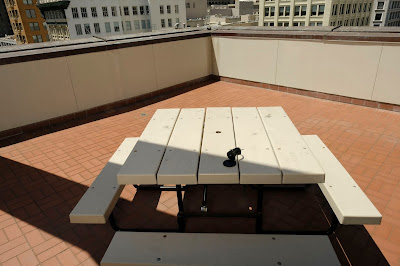 The only shade I could find were the shadows cast by the support pillars that bordered the balcony. I found this picnic table, are decided to align the nearest edge a convenient picnic table with the shadow of the pillar,creating a narrow shadow where Ms. Figueroa could sit and be protected from direct sunlight.

Lighting would be provided by a bare tube Godox AD200 self-contained flash slipped inside a Lastolite E-Z Box softbox. The unit was then hoisted atop a 12-foot Manfrotto lightstand and anchored in place using the roller bag used to schlep all of the necessary lighting equipment, plus more than enough accessories to handle any catastrophe.

A quick selfie confirmed that at full power, the softbox produced enough light to balance the sunlit background. The softbox was positioned approximately eight feet from my face.

One nice thing about working with a lightstand: Since the distance from the light source to the subject remains constant, I can adjust my camera from my position, shoot, and re-adjust until the proper exposure is achieved. 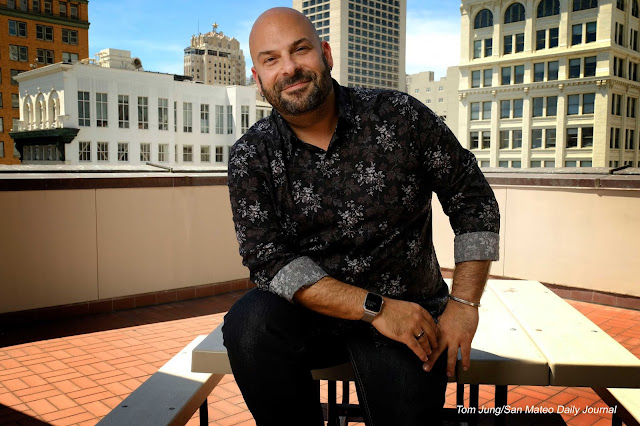 This quick photo of Kevin confirmed that my exposures were where I wanted them. This particular image was altered slightly by burning in the edges to draw the viewer's attention towards my subject's face. 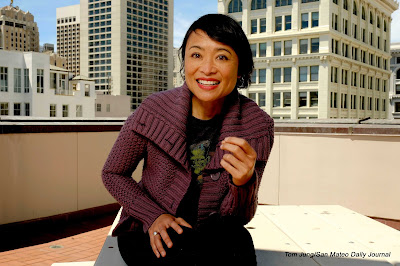 When Ms. Figueroa arrived, I  had her sit on the edge of the table in shadow of the pillar. We discussed two of Gene Wilder's movies, "Blazing Saddles" and "Young Frankenstein", and was surprised to learn that she didn't know that in 1974, Rhinoceros was made into a movie that starred Zero Mostel and Gene Wilder. After a few minutes, I changed lenses and began to photograph Ms. Figueroa for a tight head shot. 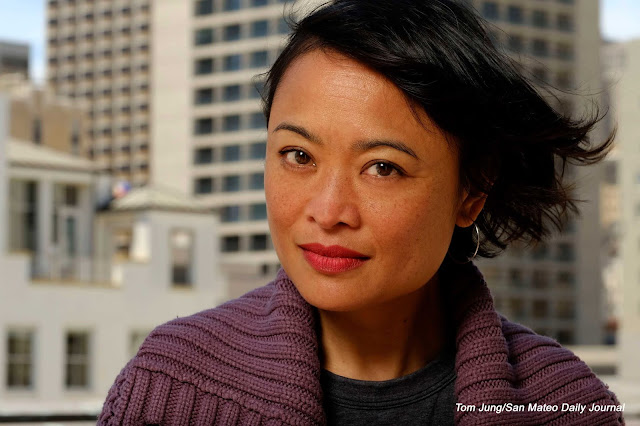 Shifting to a 50-140 mm lens allowed me to increase my shooting distance  to about ten feet, and in so doing changed the relationship between the subject and the background. The background was now reduced to an abstract pattern of soft-focused, geometric shapes. I liked this image, and submitted it for inclusion in the upcoming article. 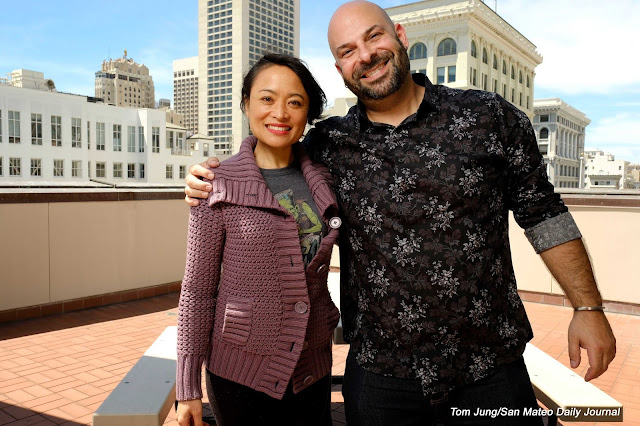 For a lark, I made this image with both Rona and Kevin. I had intended to send it to Kevin for his Facebook page, but my editor liked it so much she decided to choose it as the featured photo. I did not think the photo would be taken seriously, so I was a little less attentive to my subjects' positioning. I should have noticed that Ms. Figueroa was now standing in front of the table, and was lit by an edge of direct sunlight, as seen on her sweater. and on her face.

Kevin is the vice president of public relations and marketing for the PR firm handling ACT.  As they both went to school in San Mateo, my editor thought that this would be a great local angle, so she selected this shot to run with the article.
Posted by Tom Jung Photography at 12:10 PM No comments: Links to this post