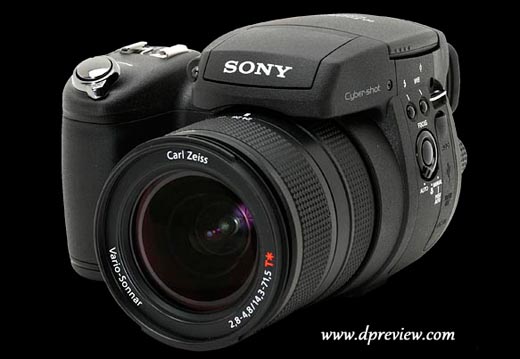 Knowing a good thing when you see one is a cultivated talent. Having a small "needs list" and an enormous "wants list" keeps me constantly on the move, just like a shark who is always sniffing the waters. If you've followed my postings you'll know that I really like speedlights and enjoy using them to create images with as much saturation and detail as possible. And whenever I find something that will allow me to push the flash synchronization envelope, like the shark, I bite.
The Sony R1: I searched high and low for a nearly new copy of this camera after it was discontinued some years back. I finally found one on eBay in Canada at a reasonable price, so I bought it. The R1 is an object lesson in bad market timing. Its introduction in 2005 was welcomed news for many photographers. At $1000.00 it was touted as providing the convenience of a point-and-shoot with the image quality and pixel count comparable to a digital SLR. But in that same year, DSLR cameras from Nikon, Canon, Pentax, and Olympus had already broken the $1000.00 barrier. One example, the Nikon D50 was priced at $700.00, complete with a modest zoom lens. And while these new DSLRs had fewer pixels than the R1, many questioned why they should put up with the R1's quirks when you could get a fast-handling DSLR body for the same price, or less? Granted, you had to buy a lens, but many photographers already had usable glass left over from their film cameras.

Quirks indeed. Like all non-SLRs of the time, the R1 is a bit slow to focus. The 5X Zeiss zoom lens, while reasonably sharp, was not removable. And finally, several important control features were missing. But it did have a reticulated LCD panel, a hot-shoe, and the most important feature, the ability to sync at all speeds up to 1/2000 of a second, the camera' s top speed.
The R1 In Action: I needed to produce a new cover photo for our Sping 2012 brochure. I decided to shoot it on the second floor outdoor stairway on the north side of our main office. This would give me a blue sky with fluffy clouds as the background. I got into position, placed marks where my subjects and I would eventually stand and took test shot. Based on my initial reading, I started with a shutter speed of 1/1250, an aperture of F 5.6, an ISO setting of 200, and a Daylight white balance. The first sample image, taken 'from the hip", is shown at the left. As the clouds began to clear and blue skies broke through, I cut the exposure by 1 stop by setting the aperture to F 8.0. I then positioned a Nikon SB-900 speedlight with an attached  Lumiquest Softbox III mounted  approximately 7 feet from where my subjects would stand. The flash was suspended from a boom so it could be centered over the group. I then used a left-hand hold to photograph myself standing on the "mark" and adjusted the speedlight's output to give an acceptable exposure. As it turned out, 1/2 power was the winner. Since the subjects would be standing at about the same distance from the speedlight, I was confident that the exposure would be identical. The speedlight test shot is shown at the right.

This particular location has one huge advantage. When shooting during the middle of the day, the sun would be coming from behind me, completely front-lighting the clouds. But the subjects would  actually be standing in the shadow of the building. Without the flash, the group would have looked something like this sample. 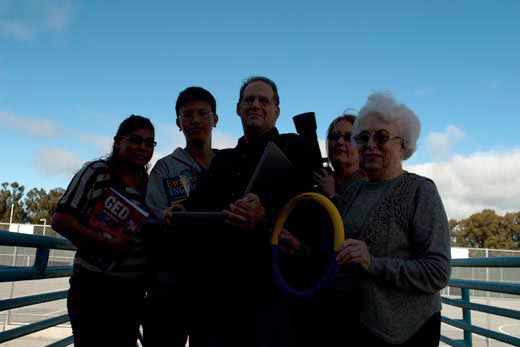 The final shot is shown below. I planned on using some sort of fill to bring details to the shadows, but my subjects were getting cold, so I stayed with the single key light without any fill. I was pleasantly surprised at the quality of the lighting provided by the Lumiquest Softbox. The shadows were softer than those created by an unmodified speedlight. The highlights were not small and specular like a bare flash but not so large as to desaturate skin tones. The final image has been "Photoshopped" slightly to improve its printability. 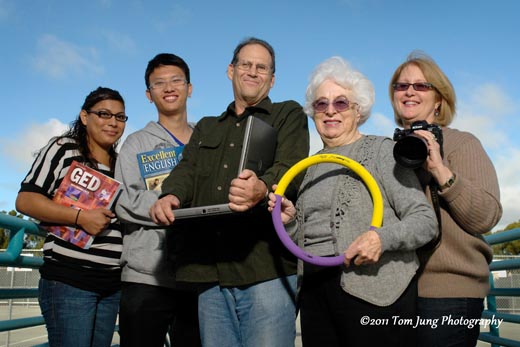 The R1 was chosen "for the job" because it has a 10.2 megapixel sensor, 70% more dots than my beloved D70s. Since the subjects weren't moving, focusing speed was not a factor. The reticulated viewfinder allowed me to shoot at a low angle without resorting to a right-angle finder, or worse, lying on the cold concrete. I tried to get the shot done before everybody congealed from the cold. And the longer I waited, the darker the photo sensitive sunglasses became.

I was pleased with the final result. Sure, there are some things that could have been improved, but the time constraints made additional do-overs out of the question. the R1's built-lens was up to the task, and additional pixels gave it the edge over a comparable Nikon. Had there been some fast action, the R1 would not have been the best machine for the job. But it was a lucky confluence of the photo's requirements and the camera's capabilities that worked together to build a very satisfactory image.
Posted by Tom Jung Photography at 12:30 AM No comments: Links to this post