Transitions In Lighting - More on the Godox AD200

My retirement has spurred some changes in how I look at my equipment. Since I no longer have a convenient base of operations in San Mateo, I have to be more careful about the portability of my lighting equipment, as I must now schlep light stands, flashes, and other bulky accessories all the way from San Francisco. And with the dwindling number of full service camera stores, the possibility of purchasing equipment that I might have forgotten is no longer an option. Once, I made a frantic phone call to a camera store where I was a regular customer, asking if they would un-box and check a Nikon D90 body and a Nikon SB-900 speedlight, and to be prepared to swipe my credit card the moment I walked in the door. This they did, and in less time than it takes to describe the transaction, I was on my way, and an hour later, using the camera and flash. That was cutting it close.

Today, I can't rely on being able to acquire needed equipment on such short notice, so I force myself to check, then double check, my assembled kit, especially after this near disaster. And above all, always have a backup for when the impossible happens, as it did here.

I used a Godox AD200 flash for this shot. I had installed the accessory round head, which has a small, parabolic reflector protected by a frosted translucent cover. I could have used the OEM bar bulb head (shown at the top of the post) and clamped a Quantum parabolic reflector to it, but it makes for a bulky and somewhat fragile arrangement. When installed, this head is sturdy enough to ride around in an equipment bag providing shares the ride with smooth, non-metallic accessories.

For this group host, the Godox is mounted in an umbrella adapter mounted on a light stand extended to 9 feet. I am standing directly below the flash, essentially hugging the stand to insure that my shadow doesn't appear in the photo.

A Man's Got To Know His Limitations: When it comes to making a shot like this, one's greatest challenge is time.  It's easy to fall into the "woulda, coulda, shoulda" funk after the fact, but every group situation is a little different, so you play the shot where it landed and move on to the next hole. In this case, the enemy is time. I had about five minutes to get the light set up before I started arranging my subjects into an acceptable composition because I had to make a group photo before I could start setting up the lights. And when you have twenty families anxious to take their kids home, every minute is precious.

This session went smoothly because I had a workable plan in place. 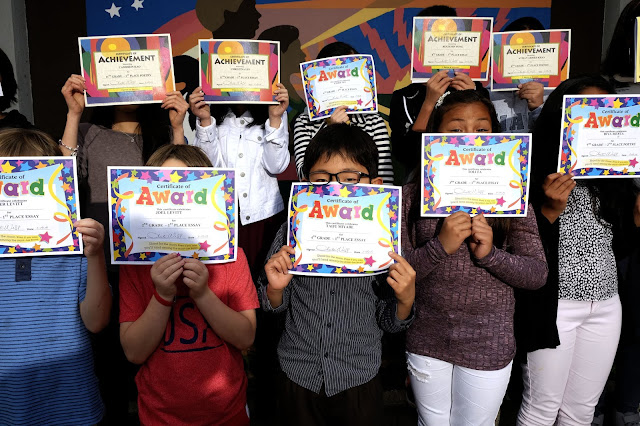 If you're wondering about the dark area near the lower left hand corner, that's my shadow being cast on my subjects. Remember that the closer you get, the greater the chance this sort of thing will happen, another reason to using a tall light stand, and hug it when my make the photo.
Posted by Tom Jung Photography at 12:10 PM No comments: Links to this post