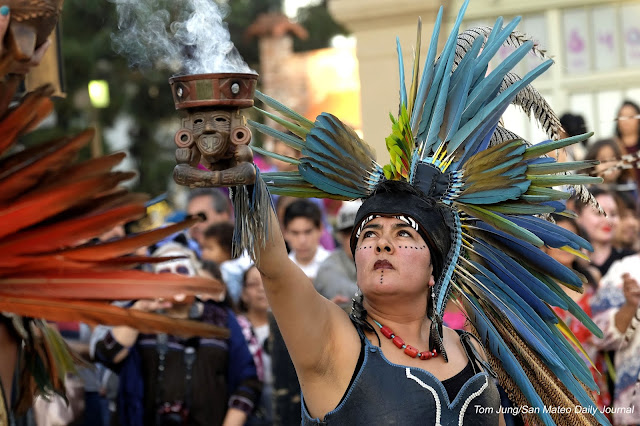 I attended the Dia De Los Muertos celebration in Redwood City simply because I was on the peninsula anyway, and having never photographed the event, decided to drop by. I arrived late for the event (scheduled time 4:00 pm, arrival time 4:20 pm) thinking this would be a walk-around hunt for photos. It turns out it was a stage show, and as a late comer, had to take a third-row orchestra position, meaning I would have many heads to shoot over. In addition, it was getting close to sunset and the stage was a mixture of direct, low angled afternoon sun and open shade. I followed my own advice of keeping my subjects "all in" the shade, or "all out", meaning afternoon sunlight. 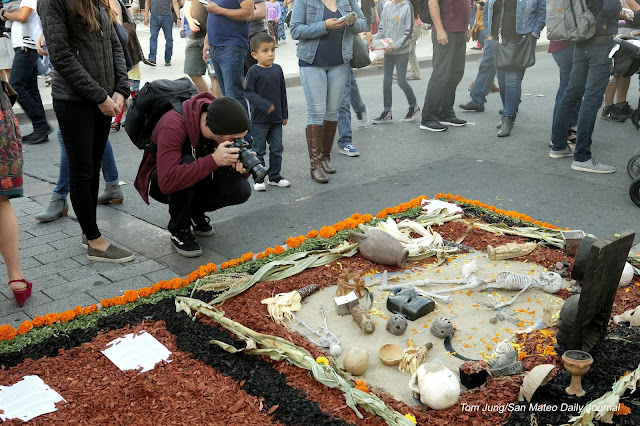 I decided that I would limit myself to two Fuji lenses: my go-to 10-24 F 4.0 and my 50-200 variable aperture zoom. I thought I'd have a chance to move in our out if I needed a lens between the 25 and 49mm gap my lens choice created. Stuck as I was in the mosh pit of spectators, I could  have tight close-ups or wide angle vistas, but nothing in between. Add to that the constant movement of the dancers and you find yourself really wishing for the faster predictive auto-focus provided by my heavier but more responsive DSLRs, but a choice is a choice, and my shoulders were thanking me for choosing a lighter kit. The sharpness of the opening shot of this post was because my subject was stationary, making it easier for the camera to lock focus. 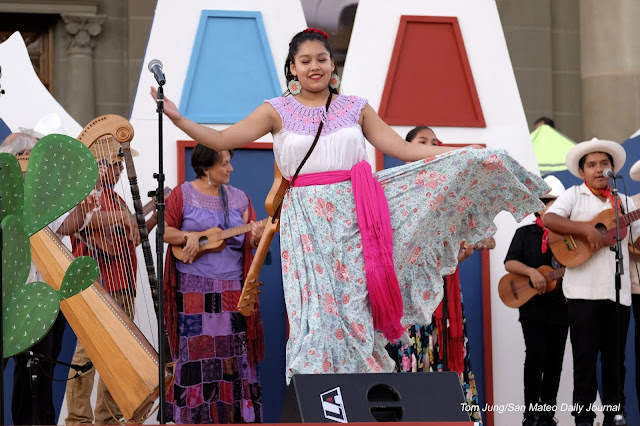 I continued to make satisfactory, but unsatisfying, photos of the performers. I left after an hour of shooting, concluding that a number of these photos would do, but none jumped out at me.


Just as I was leaving, I decided to try to make one last photo, much as a fisherman decides to cast out his bait one last time before quitting. With the lit trees and the fading skyline as a background, I photographed these two sisters using a flash bounced from the walls of a convenient food kiosk. This was a photo I could live with, and shortly afterward, went home.
Posted by Tom Jung Photography at 12:10 PM No comments: Links to this post

Halloween With The Coroner 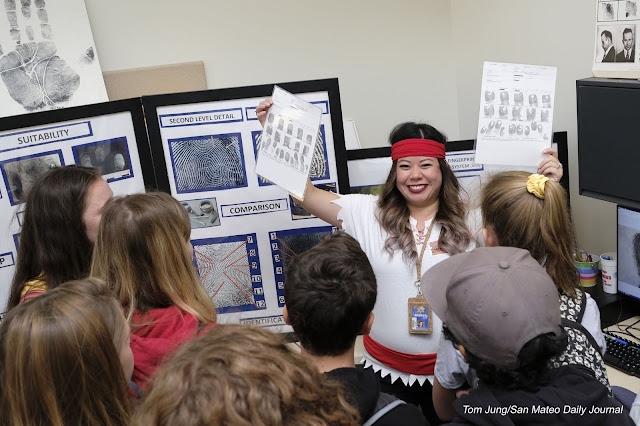 Press Release: The opening sentence of the Press Invitation was innocent enough:

The  Coroner's Office? For kids? Wouldn't that be icky?

I was to learn that there was so much more to the Sheriff's Office which houses the county's forensic laboratory where evidence from crime scenes goes to be analyzed. I should have known this because we once offered a class titled "CSI San Mateo" taught by a one of the department's own forensic experts. I must add that this tour of the lab, scheduled the day before Halloween, was totally child-friendly, and with the staff dressed as pirates, both entertaining and fun. 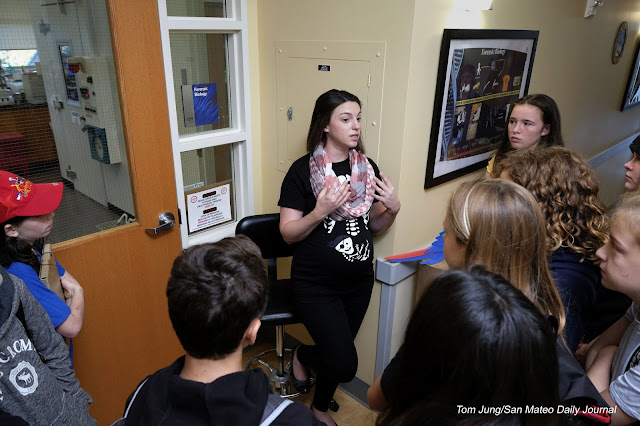 I was trying to bring back a photo that showed some of the interaction between the visitors and the spirited and costumed technicians turned docents.  Each one, dressed as a pirate, or pirate supernumerary, explained Forensic Biology's function and answered questions. I thought this shot had some potential, mainly because if you look closely, you can see that our docent is pregnant, and that her t-shirt has a little baby pirate skeleton on it. I didn't submit the photo because there was nothing to associate the photo with alab's function,  the docent's neck scarf minimized the effect of the costume, and there was an identifiable face of a minor at the side. 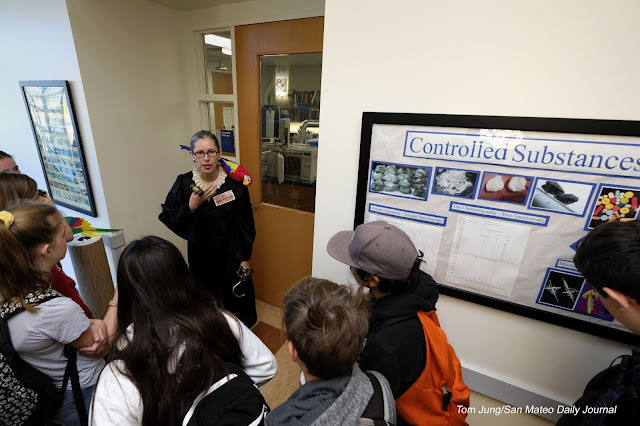 This next photo came much closer to meeting my original criterion, but the display on wall needed to be shown at full width if the "Controlled Substances" title was to be understood, forcing me to include a lot of background that didn't add to the context of the photo.  Also, the gap in the student grouping bothered me. Had the students been packed tighter, I might have considered it. One thing I liked was the name given to the docent: "Ruth Sailor Windsburg". I admit to not getting the joke until much later, even though she was holding a judge's gavel.

Gallows Humor: This proves that there is a sense of humor at the Forensic's Laboratory. Here, a "murdered" skeleton lies in arrested anguish for all see. There was a purpose to this macabre display: The number indicates where crucial evidence might be found, and the visitors, knowing this was a crime scene, made mental notes of what sort of information might be gathered. 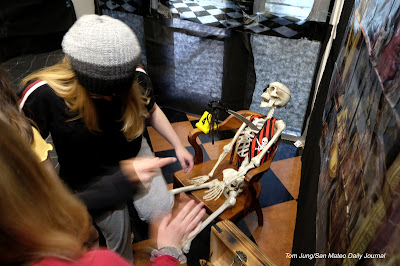 The small size of the room made if difficult to photograph from any aspect other than a "Hail Mary", high overhead camera angle, which is not all that steady. Extended exposure times would be needed to properly illuminate the background, which in this case was fabric carefully taped over a glass door. Exposure was a careful balance between the aperture necessary for a reasonable ceiling bounced exposure and the time required to properly render the background. Exposure wise, I was quite pleased with this photo, but without additional context clues to help the viewer understand the photo, it's a "no cigar" photo. 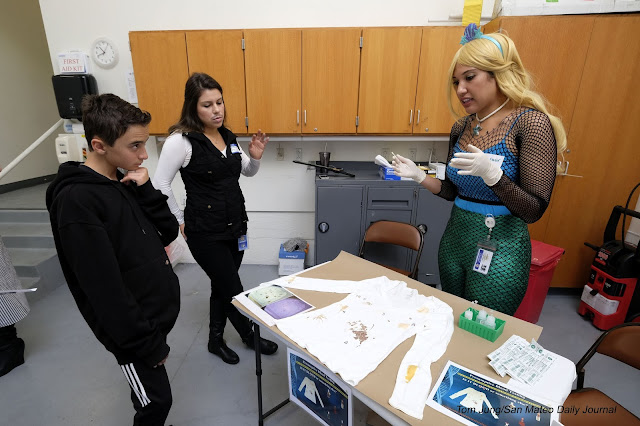 The tour was then ushered into the garage where the "CSI Mobile" is kept, and when necessary, cars can be examined for possible evidence. Here a mermaid explains how stains from a t-shirt can be analyzed for suspect DNA, material evidence, and damaged fibers which might match samples gathered at the crime scene. There were about five different stations, each cross-referenced to evidence found at the crime scene. 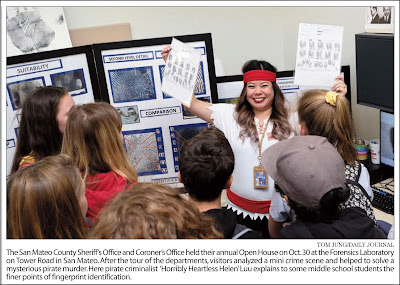 The image ran on Page 2 of the November 1 issue, which as I said before was still a position of honor, since this is normally reserved for an international photo from one of the news services. Like so many of my other photos, it exists simply as a brief moment in the history of San Mateo, a moment that was special to the staff at the county's  San Mateo County Sheriff's Office and Coroner's Office and to some lucky middle school students on a fun field trip.


Posted by Tom Jung Photography at 12:10 PM No comments: Links to this post