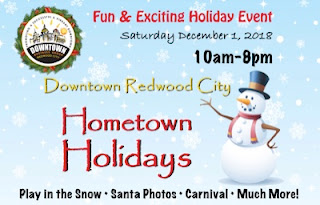 Hometown Holidays: On the first Saturday of every December, Redwood City throws a parade and block party to celebrate the holiday season. It is an all-day affair, running from 10:00 am until 8:00 pm, with dancing, music, a visit from Santa, and a parade down main street.  I was here at the request of the Editor In Chief, and since it was potentially a fun assignment, decided to attend. I couldn't spend the entire day, so I decided to concentrate on the evening activities, since I would have opportunities to experiment with lighting. 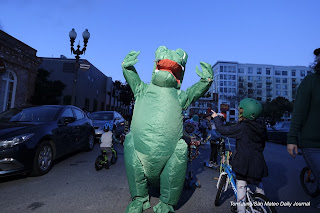 I was using with a new lighting setup (more on that later) when I was accosted by this dancing green alligator. She was wondering if I would take a group photo of her pre-schoolers who had just finished marching in the parade. Of course I said yes, thinking that this might be the photo I would submit if nothing else showed. And with a group this large, I wasn't realistically obligated to get every person's name.

Working with groups is never really easy, but when working with these kids, it was more like photographing cats. I had to call on the adults to help the youngsters settle down and pay attention to the stranger with the camera. 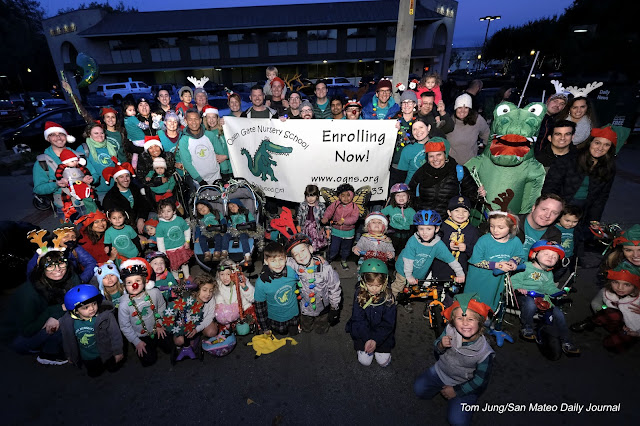 I managed to make three shots,and this one had the most faces looking at the camera. It wasn't 100%, but not a bad effort, considering I was fighting a combination of youthful excitement and "I need my nap" stupor. If you look closely, you can see the napping twins in their stroller, catching up on their sleep. 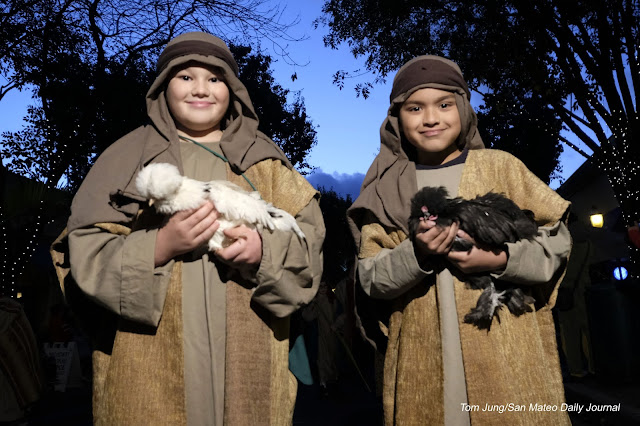 Back At The Parade: As we made our way towards the parade, this pair of young chicken wranglers came as part of the Bethlehem 2018 AD contingency. In 2018 it would be a Friday through Sunday event, so unless the paper "held the presses" on Friday night for a Saturday publication, the photo was destined to run on Monday, the day after the event was over.  This photo could be used to publicize the event in advance. 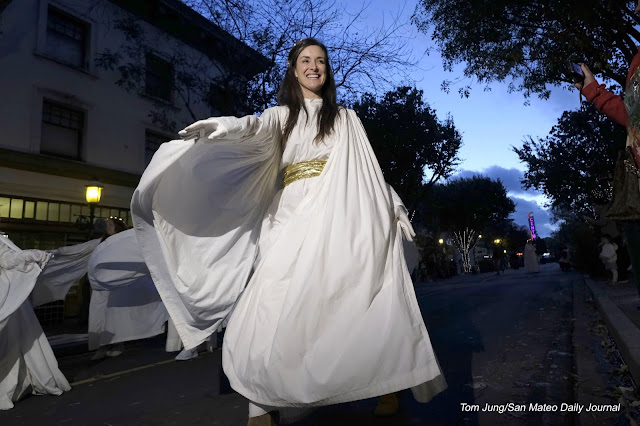 Dancing In The Street: Other members for the Bethlehem marching group were dancing down the street, and I caught this photo showing the flowing "cape" as she twirled. It also shows some of the shortcomings of using flash at night outdoors. With reflective surfaces, you lose a lot of light in the sky, and the radius of proper illumination, measured from the flash, is a narrow band.  Subjects in front of, or in back of, this band will be over and underexposed, respectively. The only way to minimize the effect is to move the flashed farther from your subjects, but the resulting loss of light intensity requires a powerful flash and a very long light stand.

The Money Shot: I needed to get the names of the two chicken wranglers from the earlier shot, so I followed the group back to the church. I manged to locate them both and get their names and contact information. I now had two potential shots, although I wasn't happy with either one. Still, I wasn't going to go home empty handed, so Cissie and I headed back to my car.

On the way out, I found this "angel" with her winged companion, getting ready to go home too. When I saw how the streetlight in the background gave a "glow" about them, I thought I would try to blend that highlight with the light from a flash, so I made a sample exposure. Examining the image, I did indeed have a "pooped pooch", and this might have made a cute photo if I had more detail in the background. But when the flash went off, the dog was alerted to my presence, and the potential moment was lost.

For the record, the flash had a full CTO gel taped to the flash tube, and the camera's white balance was set to the Incandescent preset.

Hail Mary! In an act of subdued desperation, I increased the exposure time to 1/2 second, just to see how how the evening sky would appear. On seeing the blurred (and awful!) results, I decreased the exposure by three "clicks", giving me a setting of 1/16 of a second.

Having made these adjustments, I had to get the dog's attention before I made the shot. Without thinking, I started to growl, then bark, at my subject, and she responded in kind, looking to see where the sounds were coming from. My imitation must not have been very good, as the expression I got was more quizzical than combative.

Here's the final shot. I used the reticulated LCD to get a lower perspective, and while this method allows for a more relaxed evaluation of the overall composition, it makes it more difficult to establish critical focus as it is sometimes difficult to locate the focusing brackets when the camera is held away from the eye. Close examination showed that the dog's collar was slightly out of focus, and there is overall softness in the image. This could be due to the relatively long exposure time, but luckily for me most of the subject blur will only be found in the hair highlights and the illuminated tiara.

The Equipment: This assignment was a test run for the Magmod Magbounce, a new take on the tried and true Gary Fong Cloud Dome. In theory, the open front of the device allows more light to illuminate the subject without first passing through the opaque plastic dome of the Gary Fong unit. It is also very quick to deploy, since the dome can be stuffed into a camera bag more easily than the Fong Dome can be collapsed. And the fancy magnet system makes the "on and off" process even easier.

Let me submit my opinion on all of these "domes" and their effect on your photography. The position of your light in relation to your subject is more important than the size of the light source. Even though the surface area is a bit larger than the Gary Fong unit, these modifiers come into their own when mounted off camera, which I do using a monopod like I'd use a light stand. Based on the group shot at the top of this post, it appears that the Mag Bounce creates a hard lower edge to the light pattern that you don't have with the Fong Sphere. This thing needs to be aimed carefully.

One Last Point: The stuff is expensive. It will cost more to get into a Magbounce system than the Gary Fong unit. What you're paying for is ease of setup. I was an early Gary Fong adopter, and own nearly every iteration of his cloud domes and  light spheres. I don't think the Magbounce or its sibling the Magdome are better, just faster to deploy.
Posted by Tom Jung Photography at 12:10 PM No comments: Links to this post