National Night Out: Why I Chose My X-T2

National Night Out: This annual event, held at the Martin Luther King Center in San Mateo, gives the community the community a chance to to meet and speak with San Mateo's First Responders in a a block party environment.

This photo was made using a Fujifilm X-T2 and a 10-24 F 4.0 zoom lens. Camera cognoscenti who read my last post might have assumed that I'd be using my new (to me) X-Pro1 and a prime lens. In fact, it was packed in my camera bag, ready to use. But choosing my tried and true X-T2 was the logical choice if you consider the factors involved in make such a shot.


Waist Level Perspective
The articulated LCD panel allowed me to accurately compose and shoot from a low angle. If memory serves, the shot was made with the camera about 8 inches off the ground. Why the low angle? This allows me to isolate my subjects by framing them against the blue sky. You'll notice that the horizon line is approximately 1/3 up from the lower edge of the frame, a concession to the "Rule of Thirds".

Wide Angle Lens
Working with a wide angle lens allows you (or forces you) to work at relatively short distances. The foreshortening of the subject (exaggeration of subjects closest to the camera) is held to a minimum by making shots where the the subjects are held in a shallow (fore and aft) plane.  By keeping the hands on the same plane as the face, the foreshortening effect (hand closer to the camera than the face) is minimized. Notice that the feet appear a little on the large size, but it isn't obvious. And yes, I could have fitted the lens, a 10-24 F 4.0, onto the X-Pro1, but without the reticulated LCD, my chin would certainly be on the ground. Ouch.

On this assignment, the X-T2 gave me a working edge over the X-Pro1. Because their shutters are quite similar, the use of flash gave neither camera a noticeable advantage. To this point, it was all about the camera helping me make the photo. Now, it's the flash's turn to carry the ball. Incidentally, I used a Godox V1 Round Head flash.

Flash Supplement To Existing Light
Working at short distances is necessary whenever speedlight-sized flashes are used. It's a power issue. There is one caveat when working with supplemental flash on standing subjects shot from a lower perspective: The flash-to-subject distance must be the same from nose to toes, or you'll see noticeable overexposure of the legs when compared to the face. If the flash were the key (main, or shadow creating) light source, try to elevate to light above your subject's face to produce a natural, below the nose shadow. When used as a fill (lighten the shadows) light, it is better to have it mounted in the hot shoe so it will be close to the lens axis.

Concentrating The Light
One trick is to narrow the flash beam angle so it only lights your main subject, and to rotate the flash head away from areas you don't want overly bright. If you look closely, you can see that the narrowed beam of light starts to fall off  half way across McGruff's body, but fills the young boy's body perfectly. And if you look more closely, you can barely make out an arm sticking out from camera left, conveniently concealed by rotating the head away from it. 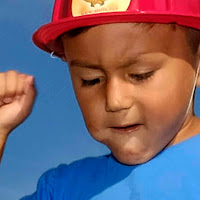 Balancing Your Fill
Successful use of flash outdoors must address two issues. First, the flash must be powerful enough to bring the shadow areas to an acceptable exposure level.  Second, you must consider how that same light will affect the areas already lit by the sun (highlights). David Hobby emphasized that light is additive, and that the highlights will get an extra dollop of light when supplemented by the flash. In a nutshell, you will need to slightly under-expose by the ambient (sunlight) exposure and your flash output.

If you examine this tight crop of my subject, you will see two shadows. The first shadow on my subject's right shoulder is created by the sun. The thin second shadow under the chin was created by the shoe-mounted flash. I contend that when the flash is kept close to the lens axis, this shadow is barely noticeable, but the results will be much better than a shot made with sunlight alone. And that bit of blur? Subject motion, somewhat common with the slow, 1/250 flash synchronization speed. High speed sync? Forget about it! 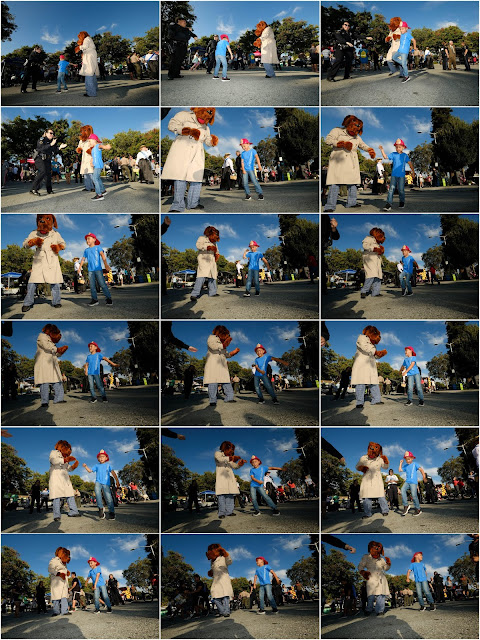 Shoot Shoot Shoot!
Probably the most important rule is to keep shooting, even after you think you have the shot. Digital cameras excel here, since those additional shots are free, free, free. Very often I'll think I just made the money shot, only to find one that I already had one a wee bit sharper or with better expression.

Composites like this one remind me of the contact sheets I made in my film days. For those too young to know, processed negatives were placed on a sheet of enlarging paper and exposed to light, resulting in an entire roll of film rendered as tiny exposures on a single sheet of paper. Since interpreting how a negative (processed print film) would actually appear, it was an invaluable tool for photographers tasked with evaluating and choosing a single image from a day's worth of shooting.

Seen as a group, you can see variations in the brightness of my subjects while the sky remains fairly constant. This images were ROC (Right Out of Camera) with no exposure adjustments, but any would have been improved with a minimal amount of post production adjustment. I chose the fifteenth shot as the keeper, primarily because of the visual "hook" provided by my young subject's right arm which resembles the posture taken by McGruff.

I'll return to the topic of the Leica/Rangefinder Mystique in a future post.
Posted by Tom Jung Photography at 12:10 PM No comments: Links to this post