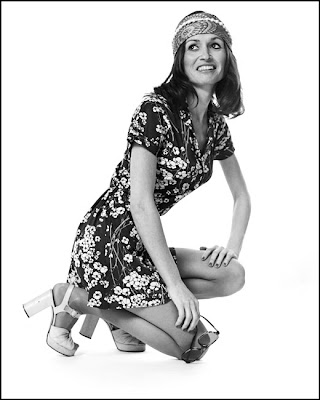 Rebecca: Once I had had it in my mind to experiment with fashion photography, I had to find somebody to photograph. Into this period of photographic discovery came a model named Rebecca Yahr. I met her at a photo show sponsored by Brooks Camera of San Francisco sometime in the early 70's. Nearly every major manufacturer of "consumer" equipment had a booth and a sales rep there. And believe it or not, one of the attractions was the dozen aspiring models from one of San Francisco's "modeling agencies". For the most part they were Charm School graduates, and while they all had some degree of poise and a basic understanding of the power of makeup, Rebecca stood out. She made posing look effortless, and with her typical model thin figure, very easy to photograph.

She taught me many things about life on her side of the lens. I learned that she, like a number of people I would later photograph, smiled "down", which meant that the corners of her mouth didn't curve upward. I learned from her the importance of framing the face. She had a very high hairline, and by using props like scarves and hats, she could effectively re-direct the viewer to her eyes. Her face was beautifully symmetric except for a slight irregularity on the tip of her nose, which her ex-husband, a plastic surgeon, refused to "correct", saying that he found it attractive. And sadly, as a model, she was constantly being hit upon. 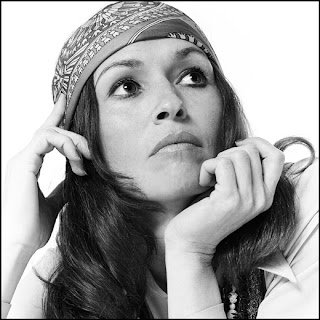 I photographed her several times in my makeshift home studio. She was always totally prepared, bringing a variety of outfits and accessories to each shoot. Looking at the contacts sheets, I was surprised to see that fashion is truly cyclical, since her shoes are not that different from what women are wearing today. The photographic "take" was limited because I was using my father's Hasselblad 1000 F, the best camera I had access to at the time. The "Hassie" was a SLR that used 12-exposure rolls of 120 film stored in interchangeable "backs", allowing a photographer to quickly change should one run "dry". If I shot 4 rolls in a session, I had to process them over a two day period because the 120 film inserts of my Ansco processing tank had to completely dry overnight, as I only owned two and they would not function properly  when they were the least bit moist. It might take a month before I had enough negatives to justify "blacking out" the garage in preparation for an all-night printing session.

She was truly my first muse, and I was understandably shocked to find that she passed away at the age of 71. She was funny, resourceful, and totally professional. But most of all, she genuinely cared about my progress as a photographer.  And one afternoon, while chatting after a shoot, she said something that I remember to this day:

"There's always room at the top".

I will always think of her with a great fondness, and will be forever thankful for her faith in me, and her belief that the time we spent together would be a benefit to us both.


Posted by Tom Jung Photography at 12:10 PM No comments: