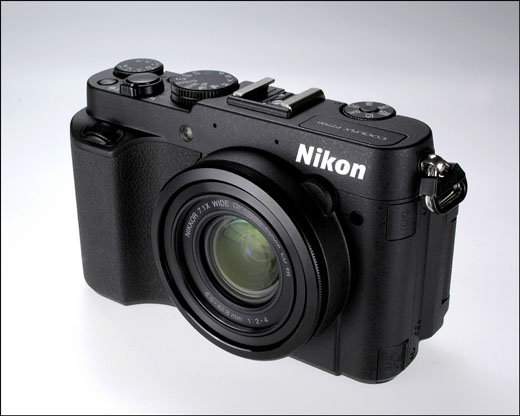 In earlier posts, I waxed eloquent about the Sony R1, the last "big" camera made by Sony before the introduction of digital single lens reflex cameras at a slightly lower price point. Introduced in September of 2005, the R1 could have gone head to head with the competition, but it couldn't compete at the same level when it came to overall speed of operation. The high flash synchronization speed didn't resonate with available light shooters who valued  high ISO speeds, wrongfully assuming that nature would provide all the light they needed for a satisfactory exposure.

It's 2013. Nikon was having a factory-authorized Father's Day sale on the P7700, offering a discounted price that included an extended factory warranty. The price was right, but I wasn't sure about it's highest flash synchronization speed. So I brought an SB-800 speedlight with me to Fireside Camera in San Francisco and attached it to the display P7700. I was able to get full flash synchronization to 1/2000 of a second. An unlike the earlier P7000 I purchased a while back, the internal flash of the P7700 could be used as a commander for remote speedlights, so long as they are Group A on Channel 3, which is also the default iTTL* setting for my Nikon D70s. Potentially, everything I could possibly want in a small package.

Now let's understand that the P7700 won't replace the Sony R1 or even one of my trusty Nikon D70s. iTTL at high shutter speeds gives me the ability to make proper flash exposures outdoors without any thought. But it comes at a price. My primary gripe is the small size of the camera. By having "buttons" on the exterior of the camera, they are by necessity placed close together, making it very easy to inadvertently press one or more, resulting in some unexpected setting changes. If you look closely at the multi-selector, there are four functions associated with cardinal points, plus a scroll feature built into the knurled bezel ring surrounding it. This is exactly where the base of my thumb rests, making those inadvertent changes all too frequent. The slow focusing speed is also a bother, but only a minor one because it won't be used as an action camera, just my hip-pocket response to difficult lighting conditions. I've actually taken to storing the camera in a soft case and attaching to the outside of my camera bag with a carabiner. For a more complete description from www.dpreview.com, click here.

The is one feature that's a first in the P-series Nikon: A reticulated LCD Panel. This would allow low, or high vantage points without relying on "Hail Mary" best guess alignment of the camera. If you can keep the glare under control, your framing can be as precise as your arms and eyesight will allow. The earlier P7100 has a tilting LCD panel, which is not quite as versatile.

Now Nikon, probably in response to Fuji's X100s, has come out with the Nikon A. Think Point and Shoot with an APS sized sensor with a 28mm (equivalent) prime lens. This could potentially give it an edge over the P7700, but the price is more than twice as much. Since my P7700 was going to be a "sun camera", any noise-suppression advantages of the larger sensor were probably irrelevant. Used at the lower ISO settings, noise was not a factor.
Photo #1: This shot was made with my P7700 set to 1/1000, F 5.6, ISO 200. What makes me make nummy noises is that it was done using an SB-800 as an on-camera commander and another SB-800, mounted behind a Zumbrella, in the iTTL mode! This gives me more freedom of exposure over the Sony R1, which must be "flashed" in the full manual mode.

Photo #2: This show was made with the SB-800 connected using a Nikon SC-28 flash synchronization cable. The speedlight was held at arm's length over my head with the camera held just above the ground. With the reticulated LCD panel, I could get a better idea of what the photo would look like. The camera was set to 1/800, F 5.6, ISO 80, flash white balance. The tilt, called "Dutching" (Thank you Bruce Dorn) was unintentional.

Photo #3 is a cropped portion of Photo #2. If you examine the shadows on the ground in the original photo, you can see that the sunlight is coming from camera left. In this shot, the light from a single speedlight was able to completely dominate the face, in part because I used an aperture/shutter speed combination that significantly underexposed the image, giving me a more saturated blue sky. The light from the flash came very close to completely cancelling out the daylight, as you can see by the barely visible shadow line on her pink top.

There is one cautionary point to using flash. We normally expect lighting to come from above, resulting in a shadow of some sort under the nose. When shooting from such a low angle, you really need to stretch to get the lighting coming from above the face. The absence of  this nose shadow robs the face of any sense of three dimensionality, something that will frequently appear in low angle shots. The only way around this is to raise the flash well above the subject using an extended monopod or light stand, or an assistant holding the flash well above the subject's face.

I have been very happy with the results so far. The camera does have the limitations of small physical size and somewhat slow responsiveness when compared to the digital SLR. However, it shines when working under direct sunlight supplemented by flash fill, and these capabilities make it mighty, indeed.

*iTTL: Nikon's proprietary flash metering platform. TTL stands for "Through The Lens", and I suspect the "i" is for intelligent. This differs from TTL which does not support the assignment of a Commander or a Remote role for individual speedlights.