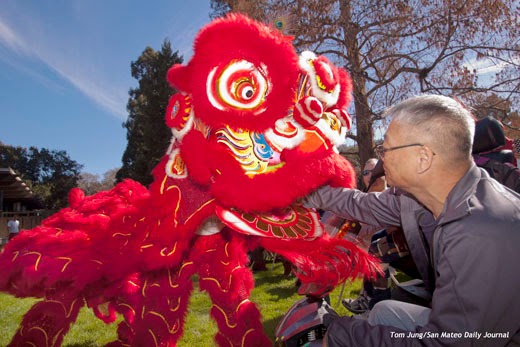 When I was growing up, my family used to kid about "Chinese Time", a term meaning the perpetual state of arriving "fashionably late" to parties and events. It's a bad habit, to be sure, and certainly one to elicit annoyance from a seething host or hostess. While my parents arrived promptly at all social functions, they never seemed to go off as planned, being perpetually behind schedule. I thought this applied only to Chinese people, but I later learn the expressions "Hawaiian Time" and "Indian Time" from some of my Hawaiian and Native American friends. So Chinese Time is no longer unique, but a concept many groups can chuckle over and call their own.

There was a traditional Lyon Dance being held on a Saturday morning at a local Recreation Center, and the Editor In Chief of the Journal had expressed a wish that a photo be made available for the Monday edition. Of course, being Chinese, I figured that it wouldn't start on time, and that the Lyon Dancers would be scheduled to perform later in the program. 11:10 am arrival to an 11:00 am event? No problem.

Since this was an outdoor venue, I carried two Nikon D70s bodies and 3 lenses: a 10-24, a 24-70 2.8 in case I needed a faster lens, and a 70-300 zoom. I also carried two speedlights, figuring that I would need some supplementary light at some point. I carried one body with the 10-24 lens mounted around my neck, with my messenger bag full of equipment on my right hip. I normally don't go into venues with a camera hanging around my neck, but I was glad I did this time. As soon as I got out of my car, I could hear the drums signalling that the dance was already in progress. I actually ran from my car into the park, a little bit out of breath when arrived.
Moments after I arrived the three Lyons left the stage and started working the crowd. I immediately set my wide angled D70s to Aperture Priority mode and set the shutter to 1/500 of a second, the fastest shutter speed available when using TTL metering. I mounted an SB-800 speedlight and set the beam angle to the 50mm setting, and started shooting. While Photo #1 is fun, the faces are too small to reproduce well. Also, the Lyon is facing away from the camera.
The Lyons moved through the crowd. This shot (Photo #2) shows some interaction, but once again, the faces are too small to have any visual impact.
As I stood next to this gentleman, he held out a "Li See", a small red envelope containing good luck money. In this case, donations would go to the Senior Center, and I caught this shot where the red envelope is clearly visible. Photo #3 was the result.
I got this shot (Photo #4) just as the donor reached deep inside the lion’s mouth to give his Li See to the dancer. I thought the lion’s eyes looked like those of an eager puppy dog, anxious to make a new friend. Ultimately, this is the shot I would submit.

I continue to shoot, confident that I had at least one good shot in the can. In this case (Photo #5), an offering was made to a different lion. The photo comes up short in several ways. First, the flash casts a very obvious shadow on the dancers waste. Also, because the donor is so much closer to the camera than the lion, he is severely overexposed. This can be corrected in post processing with some loss of saturation. Also, on close inspection, you can see that the lion dancer is looking the wrong way.
This shot (Photo # 6) suffers from the same problems caused by previous shot. The foreground subject is too close to the flash, and the middle ground lion too far. Again, post processing can help, but the overall look of the image suffers.

What, No Off-Camera Flash? Joe McNally, the Nikon speed light guru, is known for producing fantastic, multiple speedlight photos when working on location. However, when working alone in close quarters, and on camera fill flash may be your only recourse. As you can see, trying to properly light foreground and mid—distance subjects will lead to overexposure of the former, and underexposure of the latter. One way to minimize the problem is to zoom the flash head to a beam angle narrower than the angle of acceptance of your lens. This concentrates the light in the center of the frame, and feathers the light on the sides. In this case, rotating the flash head to the left would have also cut the light on the right side frame. These last two suggestions came from David Ziser, by the way. 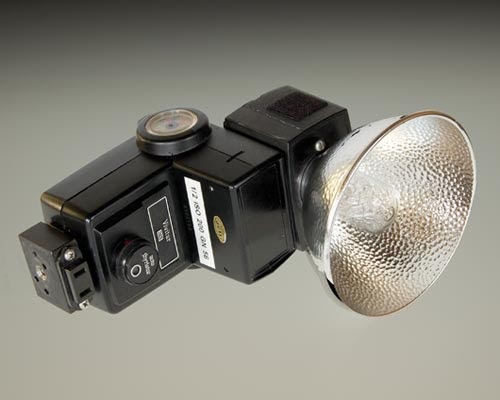 Today's Mistakes Are Tomorrow's Experience: While David’s advice works in theory, in actual practice the light pattern of most speed lights tends to remain constant from left to right. When zooming the flash head, the light beam changes in a top to bottom orientation, so the flash head’s rotation may need to be fine–tuned to suit the situation. The orientation of the flash tube, perpendicular to the light path, makes this inevitable. A more even pattern can be obtained from flash heads where the flash tube is aligned with the lens axis and are fitted with parabolic reflectors specifically designed for an even light pattern. Unfortunately, suitable units like the Norman and Quantum are just too bulky, and my bare-tube modified Vivitar flash a bit too fragile if I am constantly on the move.

Synthetic Fur: The synthetic fur used to cover the lyon's head has been a problem in the past. The fibers are highly reflective, and the density (fibers per square inch) allows light to ricochet around in the loft, make it "glow". I don't know of a practical way to cut back on this apparent super-saturation of color, but I'll keep trying.