In my on-going quest to find a full-featured flash that is compatible with the Fuji X-series cameras, I acquired a Metz 44 AF-2 flash by getting my name on an advanced order list at B&H Photo. Shortly after placing the order, I received word that one was about to be shipped. I was unwrapping it a few days later.

I paid just $239.99 plus shipping, and considering the features, the price was in line with what I got. The packaging was spartan, probably because Germany is one of the more green countries in Europe, so packing materials were stripped the bare essentials and are probably bio-degradable, or made from recycled materials. There wasn't a soft case or a accessory foot for the flash to stand on.I also noticed that there were no warranty materials. I suspect that if the unit conks out, I'm pretty much on my own, relying totally on the solid reputation Metz has cultivated over the years. Internet sources say the company is about to go belly up, so I may have purchased an orphan flash with no guaranties of future support. 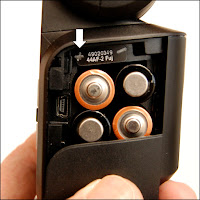 Quirks: One of the first things I noticed was the lack of a battery "map". I had to wade through the instruction manual (Printed in six languages, no less) and eventually found the diagram I needed. I used a silver Sharpie Marker to write "+" as a visual reminder of the proper battery orientation. The sliding cover on the battery chamber was very hard to open.

The flash has two irksome limitations. First, it has only four manual output settings: Full, Half, Eighth, and Thirty-Second power. I can't image why this limitation was placed on the flash. I you look at the photo of the flash's back, you can see the locations of the LEDs indicating the four manual settings. Sure, it looks sleek and space age, but I'm sure I'll soon long for those missing intermediate output levels.

The other irritant is the adjustments for flash exposure compensation, which are in the camera and not the flash. To quote the User's Manual:

As I think about the flash, I'm still not really happy with the flash exposure compensation adjustments being governed by the camera and not the flash itself. But I will say that the inboard menu system is easier to navigate than the counter-intuitive assortment of buttons on the Fuji EF-42, but not as straight forward as the Nissin i40. And like the Nissin, there's a continuous light setting (LED), which I call the "flashlight mode".

To The Good: There are some things I really like about the Metz. First, the power button serves both as a ready light (Green) and a "Charging-Please Wait" indicator (Off). Each of the four operational modes (TTL, Manual, Slave, and LED) has its own dedicated button that glows when active (TT=Orange, Manual = Red, LED = White). Incidentally, the "Slave" mode is currently unsupported, but a firmware upgrade is expected to change that. Machst du Witze?

To The Unusual: I criticized the Nissin for not allowing beam spread adjustments when in the TTL mode. In the Metz, the beam angle adjusts in synchronization with any proper Fuji zoom lens. This is the default when the flash is facing forward. However, as soon as the flash head is tilted or rotated, the manual states:

"...the motor zoom main reflector moves into an optimal position for indirect flash and stays in this position, independent of the focal length set for the camera lens..."

This I like, since bounce flash almost always means zooming the head to its narrowest angle. Smart flash - it does it automatically. And like nearly every other flash I own, using the wide angle panel trumps all zoom adjustments.

In The Field: I'll probably use the flash on an upcoming assignment, and will comment on how well the unit works in the field. In the mean time, I'll cut some CTO gels ( 1 3/8" x 2 1/8" should do nicely), and watch to see if Sto-Fen decides to make a diffusion dome for the unit.