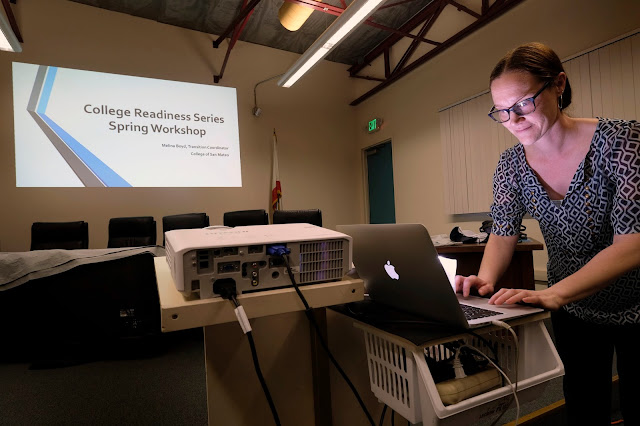 On of our Career Navigators was preparing a Power Point presentation for a select group of students, and I wanted to experiment with some way to add a flash to produce believable lighting solution under some unusual circumstances. I totally underestimated how long the setup would take, as I allowed myself only fifteen minutes to set up and make a photograph.


The Ambient Room Light: I had two options: Room Lights On and Room Lights Off.While I liked the idea of a black room there wouldn't be enough detail to give the image any context.

I backed up a bit and made a second shot that included more of the foreground. The 1.4 second exposure did reveal some detail in the room, but totally obliterated the Power Point slide. At this point, the only conclusion to be made was that the ambient exposure would probably be somewhere between these two extremes.

A Flash Accent: I would have to decide how and where to place a flash to get some light on my presenter. It's clear I could just use the light bouncing from the wall if I could manage to hold the camera still for longer than a second, which wasn't likely. 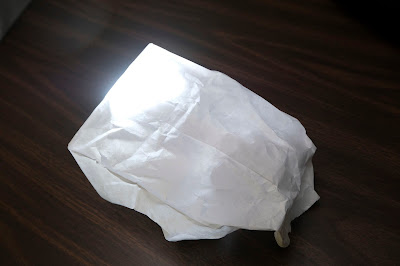 Since the flash would be hidden, I'd need to trigger it with a radio remote. In now needed a way to both soften the light and place it somewhere where it would appear to be a natural light source, or at the very least, believable.

The Bag Light. I took a white paper bag I found in the kitchen and placed the radio-equipped flash inside. (This is not an original idea; David Hobby did something very similar in another post.) Set to 1/128th power, it gave a somewhat soft, but far from ideal light source.

The clock was ticking, so I returned to the computer station and placed the bag beside the laptop, using the raised screen to conceal it from the camera. If I had more time, I might have remembered a Joe McNally trick of covering the laptop's LCD panel with a sheet of paper and bouncing the flash into it. but it was too late for improvisation now, since I was now committed to using the bag. 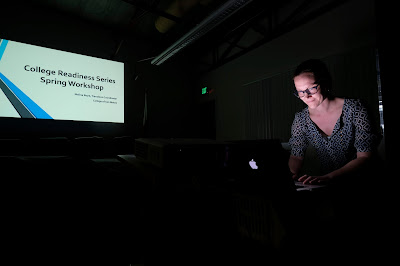 This next shot was very promising. The direction and quality from my new "bag light", now hidden from view, was perfectly believable. Now I had to contend with the apparent distance between the presenter and the projection, so I move to the right in an attempt to tighten up the composition.

As you can see from the next sample, I improved the composition, but now the light was visible. I tried to re-position the light farther back, but it was too big to easily hide. 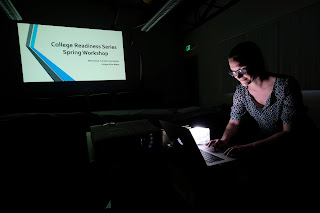 I could hear the students filing in, so it was pretty much now or never. My last option was to turn the room lights back on, which I hoped would reduce the "mad scientist" look of the image. The danger here as the "wash out" effect it would have on the Power Point slide, but at this point, I decided I couldn't do much more.

I took a deep breath and turned the lights on. I didn't really know how much they would influence the final image, primarily because I knew they were not daylight balanced. 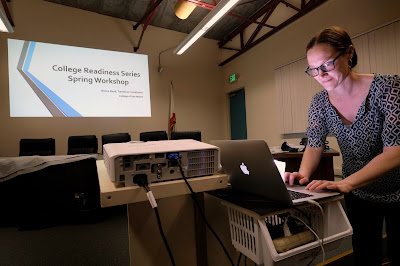 When I saw the results, I started to breathe again. In spite of the bag light peeking out from behind the laptop, the image was very, very close to what I had in mind. I adjusted the white balance of the slide in post production and let the skin tones shift where they wanted.

In the end, the final photo wasn't anything to write home about. But had I more time and a more visually interesting venue, I could have added some gridded spots to highlight key areas of interest, and that when I next photograph somebody working on a computer, I'll bounce, not bag, the speedlight.
Posted by Tom Jung Photography at 12:10 PM No comments: Links to this post