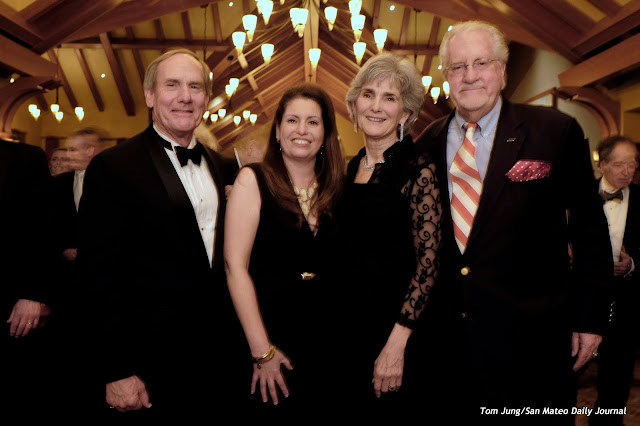 I was assigned to make a photograph at the San Mateo County Bar Association's 100th Anniversary dinner. I had contacted the event coordinator and asked for a "Bride, Groom, Maid of Honor, Best Man" grouping, which is my way of saying I wanted only the most significant participants from the event.

Cave Photography: I often photograph in venues that aren't well lit, but this location was as dark a setting as I've ever seen. There was enough light to eat by, but not much more. I scouted a suitable location for my shot, and found a position that provided an interesting background in front of me, and a slightly warm bounce surface behind me. Next, I made four exposures to help me visualize the background. This is done without flash, since I wanted to establish a base-line exposure. 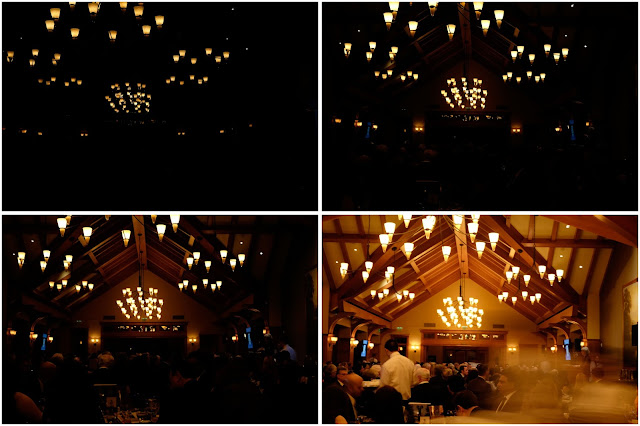 With an aperture of 5.6 and an ISO of 800, I made four exposures at the following settings: 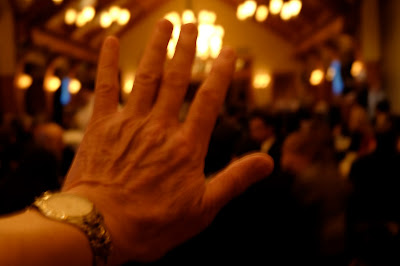 Making these four exposures helped me decide how much detail the background lights would add to the photo. The long exposure times are not a "free pass" when you combine speedlights into the exposure mix.

From my last exposure settings, I photographed my hand to see the amount of ambient light on my subjects faces.This photo showed that the ambient would add to any additional light from the speedlight. When I saw how warm the lighting was, I changed my White Balance setting to the Incandescent preset and made mounted my SB-80 with the CTO gel already installed. By taking a quick "selfie", I established a starting point for my image.

Here's the final image once again. You can see enough architectural details lit by the existing lights.But the long exposure time does have some side effects. You can see the blurred people moving in the background. What's worse is the bleeding of the ceiling lights into the edges of some of my subjects. Look at at the enlargement below, and you'll see what I mean. 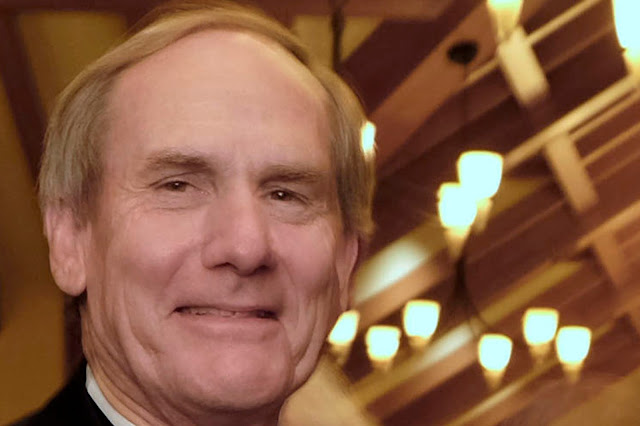 Notice that the ambient light is adding to the shadows created by my speedlight key light, My incandescent compensation (gel on speedlight and Incandescent white balance preset) lighting should rendered more neutral skin tones, in spite of the walls being warm-toned (just enough to be considered off-white in color). I could have avoided this be simply decreasing my exposure time, but I would have lost a great deal of ceiling detail. I tried imagining the photo taken at 1/8 of a second, and was not to pleased at the prospect of a background that could pass for a "galaxy of stars". 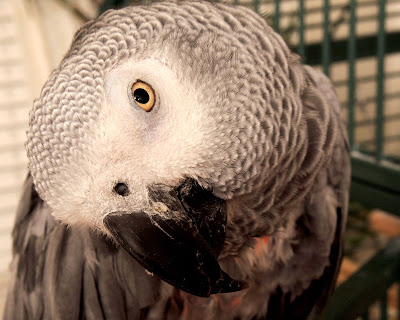 In case you wondered, this is Marsha, my harshest critic. A San Mateo resident, she does peruse the San Mateo Daily Journal, and when the photo finally appears in print, I'm sure she'll see it, and through her thoughts and actions, let me know exactly how she feels about it lining the bottom of her cage. She pretty much has the same reaction to all of my work.

So be mindful of the contribution any existing light will have on your flash-lit photographs. There is a point where the color contamination may well ruin you photograph. Just be prepared to make some modifications on the fly, and be thankful for that little LCD panel on the back of your digital camera.
Posted by Tom Jung Photography at 12:10 PM No comments: Links to this post