Party School: The Adult School has a large non-native speaking population. As such, learning English can sometimes include lesson in American culture, as it was on this Friday before Valentine's Day. The school was heading into a three-day President's Day weekend, and the general feel was just a bit festive.


Since I really wasn't out to "win a Pulitzer", I decided to just shoot some fun shots that would test the ability of N-TTL speedlights to effectively lighten the shadows. The camera was a Nikon D70 with a 2.8 24mm Nikkor prime and my SB-30 mounted in the hotshoe. Because the SB-30 hadn't been neutered, I would be forced to limit my shutter speed to 1/500 of a second or slower. Despite this, I set my the body to Aperture Priority, which would allow me some freedom if I moved out of the direct sunlight and into the shade. But for all intents and purposes, I was shooting in the manual mode, since the shots never went below 1/500 when I shot in the sunlight. The speedlight was not set to F11, but rather to F 5.6 to minimize any overexposure caused by the fill light overlapping the areas illuminated by direct sunlight. Photo #1 is typical of the photos made with this setup.
Changing It Up: The 1/500 of a second top synchronization speed was starting to bother me, so I changed to a Nikon SB-26 I had just "neutralized" so I could sync at all speeds. I also attached an SD-8 6-AA supplementary battery pack. While the increase in weight and bulk were obvious, this new combination gave me three advantages over the on-camera SB-30. The new combination positioned the flash tube higher above the lens axis for marginally better lighting, increased my available power, and decreased flash recycle time. Photo #3 shows the advantage of switching to a neutered flash. The record shutter setting was 1/800 of a second with no blown highlights, the byproduct of the minus 1 stop exposure compensation.
Foreshortening And Wide Angle Lenses: Assuming that you can work comfortably at such close shooting distances, you're bound to experience two consequences: foreshortening and light fall-off. Foreshortening is when objects closer to the camera appear disproportionally large, and somewhat brighter. In Photo #4, you can see that the left hand appears much larger than the right one. Also, the skin of one's open palm is more reflective than the back of the hand, resulting in a combination that makes the hand appear much larger than it is. Burning the hand in post production can reduce the visual impact.

Paper Plate: Working in a free-style manner, I was free to experiment a bit. I remember that in the past, resourceful photographers would use a white paper plate as a reflector to improve the quality of the lighting. This worked well with an older flash whose head could be tipped skyward. All you had to do was just hold the plate at a 45 degree angle to the head, a relatively simple task. This raised the light ever higher over the lens axis, giving the best lighting yet.
As you can see from the "glare" that outlines these two dancers (Photo #6), the sunlight is obviously coming from behind. The longer exposure in these last two photos (remember we're in Aperture Priority) allowed more detail in the classrooms in the background, making the two photos much more believable. The "ghosts" problem wasn't adequately addressed by the factory lens hood. However, when using a film formatted (FX) lens on a APS-sized sensor equipped camera, there are going to be some gaps in the protection provided by the hood. I once modified a Hasselblad adjustable bellows lens hood to work on a Sigma 24mm F 1.8 lens, and may be forced to return to that solution because it actually worked.

On-camera speedlight fill is a useful techniques when photographing outdoors. It is almost a requirement for event photographers who must provide photographs that are both salable to the subjects and reproducible in the society pages of the local newspapers. I'll talk more about light modifiers for on-camera flash in a future posting. In the mean time, here's one on the Gary Fong Light Sphere.
Posted by Tom Jung Photography at 12:10 PM No comments:

When "Speedlight Present" Is Absent 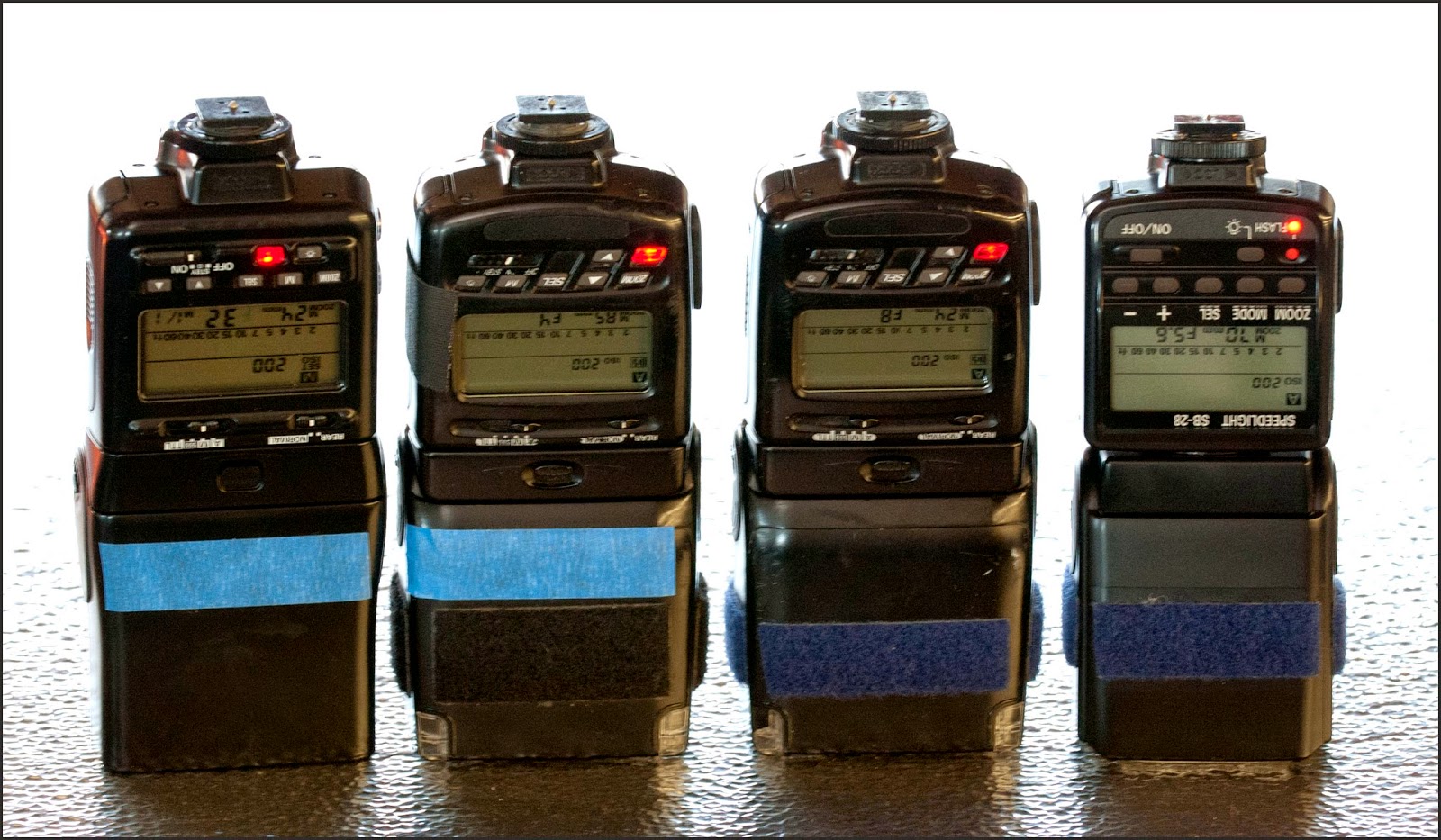 So far I've neutered a total of four Nikon Speedlights (one SB-24, two SB-26s,  and one SB-28). As a precaution, I've blue-taped, or installed blue velcro, on each of these units, primarily as a reminder that the Speedlight Present pin has been disabled. This is not an issue with the D70s they were modified to be used with, but this modification could cause some problems if any of these modified speedlights wander into a camera bag with my D300 or my D7000, two heavy-use cameras that can't perform the sync-at-all-speeds magic.

The Speedlight Present feature is a safety device that prevents a camera from firing at any shutter setting that exceeds the manufacturer's top synchronization speed. When functioning normally, Speedlight Present prevents the user from accidentally selecting a speed faster than 1/500 of a second for the D70; 1/250 for the C90, D300 and D7000; or 1/200 for the D80. These speeds are not arbitrary; they are the minimum speed where the entire sensor is exposed to the light coming through the lens for a single instant.


The shutter mechanism used in the digital single lens reflex has its roots in the original Leica camera, which dates back to 1925. It consisted of two rubberized cloth curtains that marched past the film using a mechanical clockwork mechanism. Early versions moved from right to left, probably as a concession to the positioning of the gears and springs required to make the system work. At some point, the shutters were redesigned to accommodate a metal curtain that moved from top to bottom, something like a roll-top desk. Here's how the two-curtain shutter works when the camera is set to the maximum flash synchronization speed. When the shutter release is pressed:

When shutter speeds briefer than this maximum synchronization speed are chosen, it is impossible for all of the pixels to be lit at once. At these speeds, a slit (gap) separating the two curtains travels across the sensor. All of the photosites get their serving of light, but not all at once.  The slit could be made to vary in width, depending on how much light is required to properly illuminate the image. A wider slit translates into more time for each pixel to absorb the light necessary for proper exposure. A narrower slit, less.
I made a series of photos to illustrate the slit, and what could happen if I deploy the wrong speedlight. Because optical lens systems actually invert the image, I modified the samples as a nod to technical accuracy. If you inadvertently put a neutered speedlight on a camera incapable of high speed synchronization, like a Nikon D90, you'll get results similar to these:

At 1/200 of a second, the first curtain has advanced and disappeared into the lower reaches of the cameras innards. The second curtain waits briefly before advancing, giving each pixel its full 1/200 of second. The entire surface isn't illuminated all at once: the  pixels at the top edge are lit before those at the bottom.

At 1/250 of a second, the top synchronization speed for the Nikon D90 I used for these photos. The second curtain will advance the moment the first has disappeared past the lower edge.

At 1/320, you can see a darkened area at the top edge of the frame. The second curtain started its advance before the first curtain fully disappeared, creating a gap between the two that was not as wide as the frame. Since the flash fired the moment the first curtain had completely disappeared, we catch the leading edge of the second curtain as it advances into the image area.


In these last three images, you can see that the second curtain is in motion a bit sooner for each decrease in exposure time. Remember that that the flash is set to fire when first curtain is completely hidden by the lower edge of the frame, and that the rear curtain follows, leaving the proper gap for each exposure setting.

I've been really pleased with the modified speedlights, as it gives me the option to carry one as my third, backup unit. I can now stuff a D70 in my camera bag (or carry a spare on my neck) and know that I can use the magic all-speed-synchronization if I need it, and not have to worry about finding a neutered SD-17 flash extension cable to keep with the flash,or the extra hand needed to use it.
Posted by Tom Jung Photography at 12:10 PM No comments: