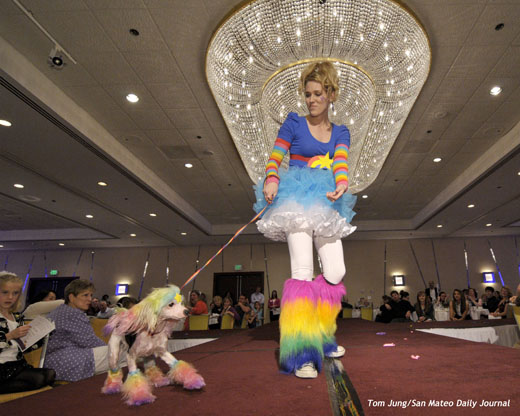 I always look forward to Fashion For Compassion, a pet fashion show that includes a luncheon and auction. This will be the third time that I have photographed the event, and I would like to think that this time I have the drill down pat. I have two objectives: make the Fashion Show Runway Shot, as seen here, and some candids of cute animals. The paper was only interested in the "pick of the litter", which this shot definitely was.

Last year's "money shot", while similar, may have been more a combination of being in the right place and a lot of luck. I had forgotten how quickly the dogs would turn away from me, anxious to leave the runway and get away from the scary crowd. For this shot, I had only enough time to make two quick exposures.

Setting up for the runway shot was straight forward. I used a Calumet wireless slave trigger to fire an SB-800 mounted on a light stand. I had experimented with leaving the camera's white balance at "flash" and let the ambient go warm, but I didn't like the result. I eventually added a CTO gel to bring the white balance closer to the ambient light provided by the overhead chandelier because it would play a major role in the photo's layout. 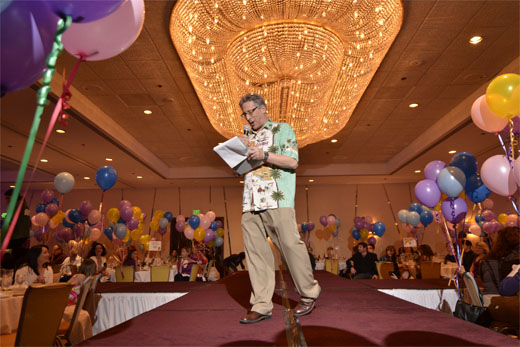 This shot was taken with the camera on "Flash" white balance before I gelled the main light. The background is really too warm, but this turned out to be an interesting photo, albeit somewhat surreal. The SB-800 had a Honl Grid mounted on it, so the light is very hard and direct. This was a sketch shot, so I hadn't yet mounted a fill flash on the camera. As I mentioned in earlier posts, the Calumet unit allows full iTTL control of a shoe mounted flash while maintaining "dumb" control of a manual remote speedlight. The round shadows in the foreground are from balloons that floated just below the speedlight. I remembered to bring a tall light stand because I knew that I would need to get the speedlight very close to the ceiling so I could shoot over the offending balloons. They would be popped as part of a raffle prize giveaway, which is why they don't appear in the submitted shot.

Just before the presentation began, there was time to make some candid shots. By now, I had attached CTO gels on all three SB-800s, including the one  on the light stand serving as my key light. I planned on using on-camera bounce flash. The camera's white balance was set to Tungsten, so everything matched. 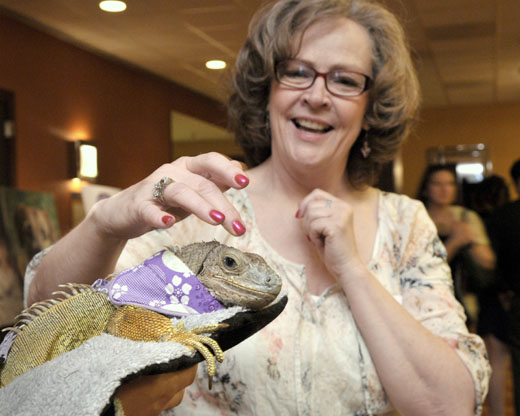 This typical bounce-flash shot was made in the hallway just outside of the main dining area. Working with a fairly open aperture, it wasn't possible to get the lizard and the Lady in sharp focus, so I focused my attention on the fingertips and let the face go soft. I also turned the subject so that the accents lights in the background would give a sense depth without adding any distracting detail. There is a bit of color contamination due to the tinted walls and ceiling with a dash of warm ambient thrown in. Color correction in post processing improved the situation slightly. 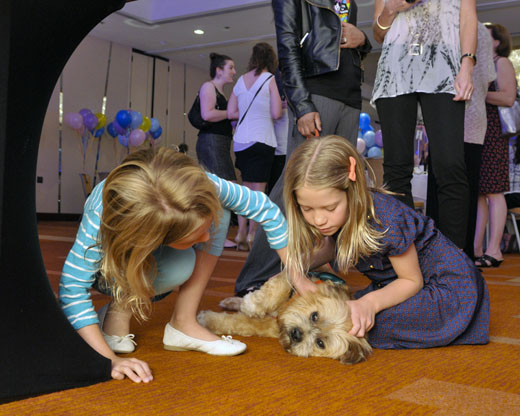 Straight bounce worked here. There are a few things that one should watch out for. First, the young lady at the left has her legs in an awkward position. Second, the dog isn't particularly "cute". And finally, the color contamination from the rug makes the left subject look downright orange. I didn't submit the shot, since it wasn't particularly compelling, but it's still a nice shot of the two sisters. 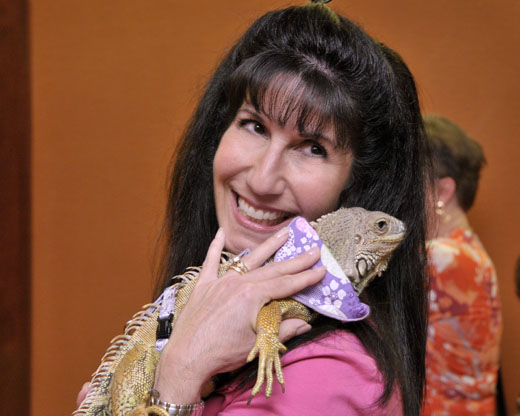 Back in the hallway, Allie the Green Iguana made a new friend. This woman was obviously not afraid of the lizard, which remained surprisingly calm throughout the day. The bounce light came from high above (see the nose shadow). I suspect, but can prove, that most of the light came from the white ceiling and not from the darker walls which impacts the depth and placement of the shadows. The woman in the background pretty much killed the shot. 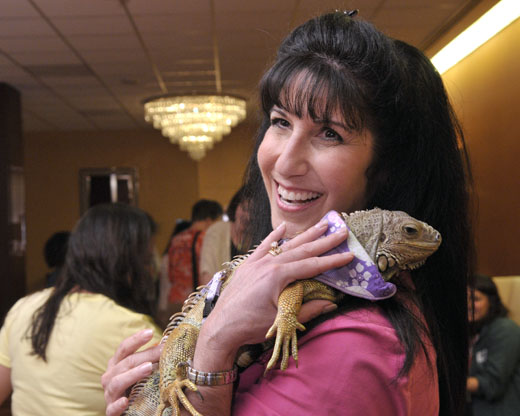 I tried something different here. The on-camera light became a commander, and my second speedlight set to Group A remote. The main light, bounced off the left wall, was the key/main light (+.3 stops), while the on-camera flash became the the fill (-2.0 stops). The Calumet transmitter could stay on the camera, since it allows iTTL controls to pass through it. I didn't expect the color contamination to be as bad as it was. You live, you learn. 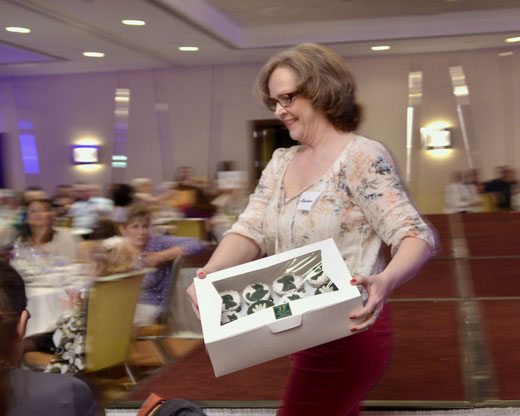 This last shot was a "drag shutter" shot, meaning that the shutter speed was too slow to stop the movement, while the flash partially freezes the action, giving motion blur to the background. I have obviously not mastered the technique, but I like the way this shot turned out. The next time I'll set the camera to Rear Curtain Sync, which will put the blur behind the subject. The cupcakes were being auctioned off,  so they were moved from table to table as quickly as possible so that everybody could see what they were bidding on.

Try to learn something new every time you shoot. Looking  back, I learned plenty. And while I don't think I made any mistakes, I had some unexpected results. Experience is being a little better prepared to anticipate when things can potentially go astray.