Let's Cut To The Chase: I've been waiting for the official release of this flash for some time. Rumors of its existence, followed by prototype reviews, kept me in rapt anticipation until just this week when they were advertised in a Father's Day Sale supplement from Samy's Camera. Nikon, Canon, and Sony were the first ones out the gate, with the  Fuji version following in the near future.  I went down and snagged a Nikon version, and immediately got it ready to shoot a two-assignment Saturday.

Let's list the things that I really find exciting, even though they may not necessarily be important to you.

R2 Wireless Comparability: The  flash is compatible with my existing R2 controllers, and is has both remote and a commander functions.

Lithium Battery: The V1 uses a battery that is different from those used in my Godox 860 flashes. I understand that the new battery gives the flash a shorter recycle time. The flash itself has a novel doorless compartment where the battery slides into, and out of, the flash body.

Fast Recycle Time: When set to full power manual output, the V1 recycles in 1.5 seconds, a feat unmatched by any other flash or speedlight that I currently own.

Zoom Head: The beam spread is adjustable from 28mm to 105 mm. There is an Auto setting that will automatically adjust the beam angle to the match the lens focal length.

Light Distribution: Check out these beam samples. The lighting is even, with no discernible hot spots in the center. This is typical for parabolic reflectors, and the main reason for the popularity of the Armatar conversions for Vivitar flashes.

To test the coverage, I mounted the flash on a D700 full-frame body and used a 20-35mm 2.8 Nikkor. Shooting distance was about two feet from a blank wall. The shoe-mounted V1 was set to Auto Zoom. The first frame shows the falloff when the lens focal length is shorter than the flash's minimum setting of 28mm. In the second frame both lens and flash are set to 28mm. The third from shows a 35mm/35mm pairing.

Compare this to the beam distribution for a standard flash head (Adorama Flashpoint Zoom R2). You can see a definite hot spot in the center of the beam when set to 20mm and 28mm. It could be argued that this is an academic exercise, but in actual use, the smooth edges can be a real help if you need to feather your beam to adjust for variations in distance between the foreground and the background, or the left side of frame and the right.

The takeaway from this exercise is that you're likely to have some corner fall-off when shooting with lenses with fields of view that are wider than the V1's widest setting of 24mm. I also  suspect that the flash is favoring the top of the frame due to flash parallax* induced by distance between the lens axis and the flash tube shooting so close to the wall.  These test shots were made with a full frame D700 body, and I suspect that you'll get a much better distribution of light if you used an APS body like the D300. You have to agree that shadows created by the V1's are extremely soft, and while I don't make it a habit of photographing blank walls, it's comforting to know that the usual flash "hot spots" will be minimized.

Head Tilt: The V1 tilt head rotate from -7 degrees down for closeups, to 0 degrees (straight forward) for most shots, through 90 degrees (straight up), and to 120 degrees (past vertical) to allow bouncing the flash high and backwards when the camera is held horizontally. Rapid deployment is good.

USB Compatible Charger: A small thing, but a reflection of our USB oriented times. The charging cradle, USB cable, and the AC adapter create a  very compact charging unit. Could this be the reason for the different battery? 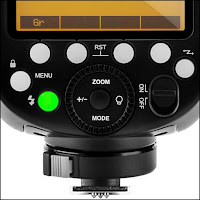 Control Layout: The V1 packs a lot of features into a compact layout, and depends heavily on the LCD panel to provide feedback on the selections you are making. Most on-board flash controls are accomplished by selecting one of four options, listed clockwise from the top: Zoom, Modeling Lamp (continuous LED lighting), Mode, and Exposure Compensation. Another important feature, the Wireless Selection Button, will be discussed later. It's identified by the sideways lightning bolt at the flash's far right.

Adjustments are then made by rotating or pressing the Select Dial, a knurled, rotating bezel ring that surrounds the four options. The Set Button at the center serves to lock the settings in place.

(1) Zoom: To adjust the beam angle, you will:
Press the Select Dial at the 12 o'clock position by the Zoom label.
Rotate the Select Dial through the available choices, from Auto (zooms in synchronization with your zoom lens), 28, 35, 50, 70, 80,  and 105.
Press the Set Button to lock in your settings.

(2) Modeling Lamp: Let's skip this one. The adjustments are decipherable, but convoluted and too easily forgotten. Hey, you're a photographer. You don't need no stinkin' modeling lights.

(3) Mode: Here is where you select the three on-camera flash modes by pressing the Mode Button:
iTTL: Conventional Through The Lens flash metering. See iTTL Exposure Compensation below.
Manual: In the manual mode, you can dial in the exact flash output in one-stop, for one-tenth stop increments. See Manual Output Adjustments below.
Repeat (stroboscopic): Far out. Groovy. So 1970s.

(4) Flash Exposure Compensation (+/-): This can be used in the three other on-board exposure flash controls available through the Mode setting. Find more details in Supplementary Instructions below. 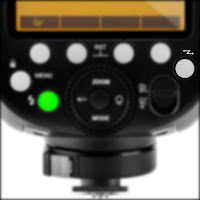 The Wireless Selection Button: Pressing this button allows selection of one of the following three modes:

iTTL Mode: Wireless communication is off. The flash merely functions as an on-camera flash with access to all the relevant output adjustments.

Master Unit Setting: Here's where your V1 becomes a commander flash. You have the option of three output settings (TTL, Manual, and Off) for the Master Unit and up to 3 Groups.

Battery Incompatibility:   The battery is different from those used in the other  Godox/Adorama flashes of similar output. Since I already have 8 Godox 860 compatible batteries, not having to purchase additional backup batteries just for the V1 would have been nice. Also, at the time of this posting, they were not yet available for sale.

Replacement Warrantee: Something new has been added on the repair and warrantee scene: The counter replacement. Samy's , a stocking Godox dealer, will replace, on the spot, a Godox flash that fails within the first year. After that, I suspect one would pay a flat "service fee" which could amount to a subsidized replacement for the ailing flash. I was informed that labor is simply too expensive when compared to replacement. I understand the logic, but it still seems strange that I must now consider my flashes as expenses, rather than investments.
.

All in all, a decent flash that gets high marks for its even lighting pattern. I probably won't miss the lack of Nikon CLS compatibility. The build quality is generally satisfactory, but the clicks on the aforementioned Select Dial are a little mushy, giving the impression that the unit was wearing out prematurely, which it hasn't. And finally, the flash has a lot of features and too few exterior (non-menu driven) controls. Dedicated exterior buttons would be nice. Given time, I'll get used to these minor shortcomings, but overall, the V1 is a very capable unit.

See a You Tube video on the V1 by clicking here. Advance to 4;20 to see the battery.

*In this case, parallax exists because the center of the flash head is a bit more the 7" above the axis of the lens. Since the test shots were made at a distance of less than 2 feet, there is a significant amount of vertical displacement.
Posted by Tom Jung Photography at 12:10 PM No comments: Links to this post