In my last post, you were introduced to a complimentary white balance and corrective gel pair that could be used to create some unusual color effects. In that post I demonstrated how the combination of a 30M lens filter and a “Full Green” correction gel can yield a magenta toned sky with  normal flesh tones. If you look at the illustration (Photo #1), you can see the filter/flash pairing of the filter and corresponding gelled flash at the top. I use the term “normal” with the admission that some color adjustment in post processing may be required to produce an acceptable image (Photo #2). I gave credit to Joe McNally in the last post, and will here paraphrase the explanation he gave in his book, "The Moment It Clicks". To wit: When photographing in mixed light sources, concentrate on the skin tones. In his example, the room had a variety of light sources, but chose 30M/Full Green combination for a reasonable rendition of flesh tones illuminated by the speedlight, and a close match to the room's ambient florescent lighting. The little existing daylight and incandescent lighting was thrown under the proverbial bus.

For this second variation (Photo #3), my goal was a twilight sky rendered deep blue. In this case, the coupled pair would have been an 80a filter and the CTO (aka Color Temperature Orange) correction gel on the flash, as seen in the lower half of Photo #1. Had I been using daylight film 30 years ago, I would have gone with this filter and gel combination. Today, I simply used the camera's Incandescent White Balance Preset instead.

Both of the full Green and CTO filtration were/are available as acetate gels for the Nikon SB-800, and as plastic snap-on filters for the SB-700 and SB-910. The SB-900 was designed to use an acetate gel mounted in a clear snap-on holder. But when I learned that the SB-910 snap-on incandescent and fluorescent filters fit the SB-900, I bought several sets.

Just a quick reminder: Full Green filtration converts a daylight balanced light source (your flash) to a simulated fluorescent lightsource, and the CTO converts a daylight source to ""incandescent". This can be a slippery slope, because there are several interpretations of the proper color of an incandescent light source, each with a tint on the redness scale. To quickly summarize, "redness" is measured in Kelvin degrees, and the higher the degree level, the bluer the tint. For example: There is the endangered incandescent light bulb (2700-3300 degrees Kelvin), the Type A (movie) Photoflood (3400 degrees Kelvin), and the Type B Photoflood (3200 degrees Kelvin). Daylight is usually pegged at around 5600 Kelvin degrees.

Improvised Bounce Surface: I had planned on making a quick outdoor shot using on-camera bounced flash, and to take advantage of the drizzly evening sky. Since the alcove outside of my office building is painted a pale shade of pink, light bounced of the exterior would give the subject a definite red tint. To remedy this, I gaffer taped a piece of unbleached muslin, a readily obtainable fabric, to a glass door for use as a bounce surface. The pale beige color gives the bounced light a bit of warmth which never hurts when photographing people.  You can see the muslin taped to the door here in Photo #4.

I decided to try an angled on-camera bounce flash instead of my normal “point to the rear” selfie lighting. Because the flash head was set at an angle, raw direct light will often spill from the edges of the flash head, or in this case, from the edges of the filter, as you can see in Photo #5. The speedlight is aimed at the muslin at same angle it would be when I actually made the photo. The quick fix was to improvise a “gobo” (GO Between Optics). Gobos can be anything that goes between the light source and the camera.

You can see in Photo #6 that I made a shade with wide gaffer tape. It covers the two surfaces that could be seen from by the subject, and therefore might have an effect on the final photograph. In Photo #7, you can see that it prevented any direct light from spilling onto the subject. Notice that direct light no longer "leaks" onto the subject which allows the subject to enjoy the uniform warmth of the fabric. The tiny hot spot in the middle is the reflection of the flash from the glass behind the muslin, which has no impact on the image itself. Now I could have covered the window with cardboard to prevent the reflection, but that's going TOO far.

The havoc caused by light leaks, along with the gaffer tape gobo remedy, we in part inspired by Joe McNally. The normal response might be, "That little bit of light won't make any difference to the final image." Maybe so, but hard light, like the wink of light from an infra red trigger, can create tiny, annoying highlights that may just appear where you least expect them.

This choosing of complimentary white balance settings and flash mounted filters and gels can be carried even further. Cokin, the filter people, once made complimentary flash/camera filters combinations to create some "far out" color effects. I've never seen such a pair for sale, but found them in a product list of a 20 year old filter set found in a second hand store. And photographer and impresario Gary Fong crated a You Tube video on using  his Collapsible Cloud Dome and the accessory filter set to create some startling effects. 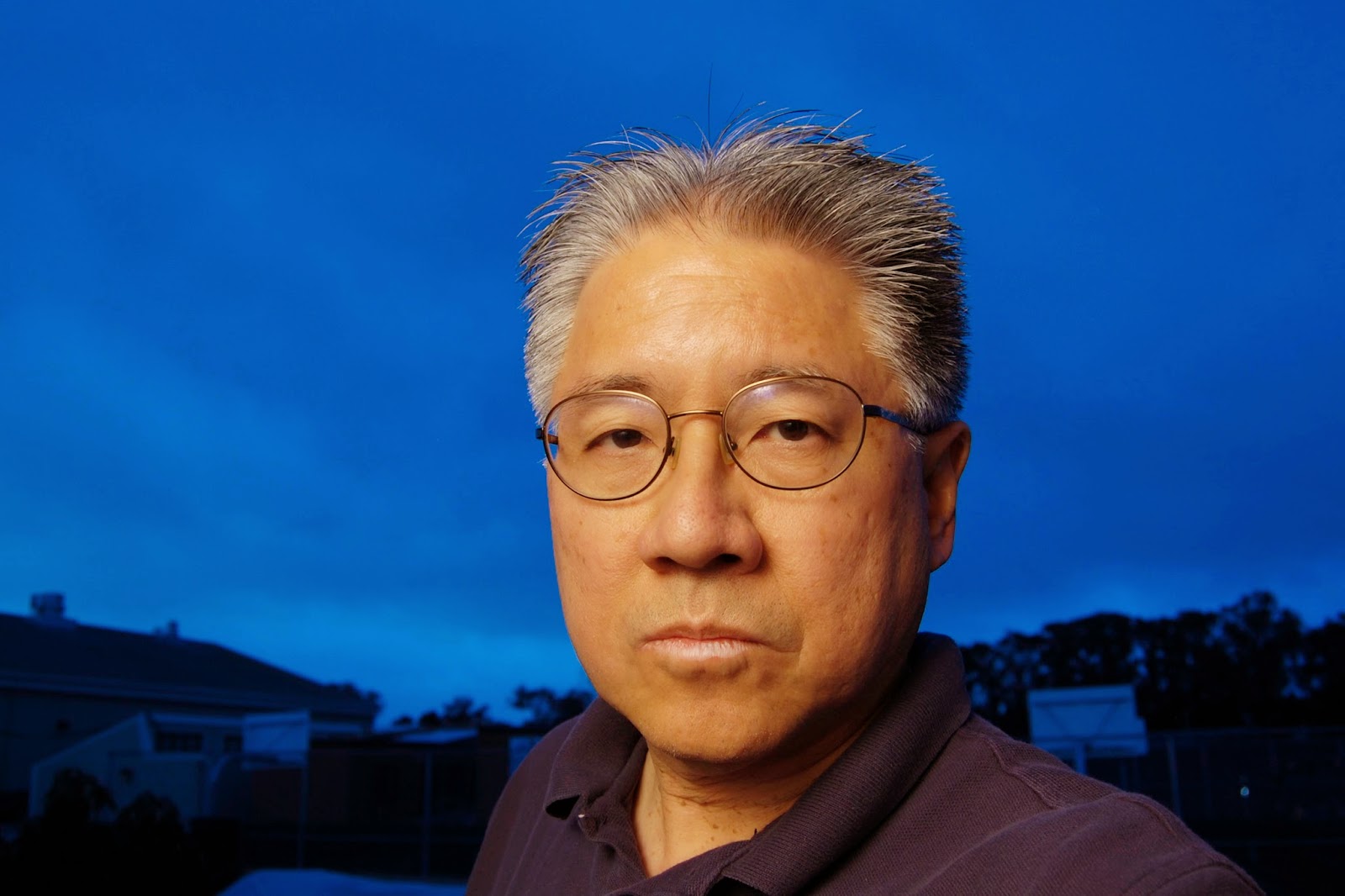 With one last look at our hero, I leave you with some advice. Photoshop could probably be used to simulate these lighting effects, but more consistent results can be achieved when doing it "in camera". With careful planning and a judicious use of your camera's white balance settings and the two gel filters you should have gotten with your Nikon speedlight, you can go a long way in creating images that will inspire questions like, "How did you do that?" Granted, blue skies are not that unusual, but it does have an ethereal feeling, even if the subject does not.
Posted by Tom Jung Photography at 12:10 PM No comments: