To Flash Or Not To Flash... 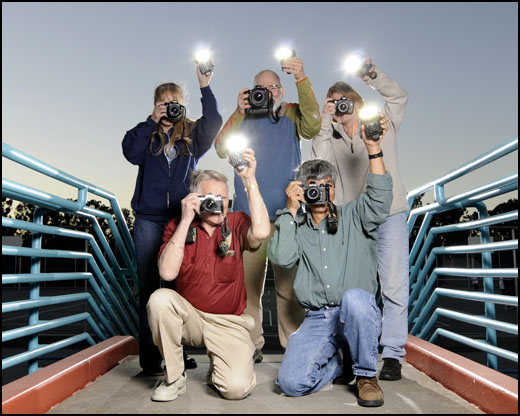 I was showing my friend a collection of some photos I had taken for the Journal. She paged through the samples, and stopped at two that I had taken and placed on facing pages. This was not an accident, I explained, as I had imagined that I could casually comment that one shot was taken with available light, while the other with the judicious use of an on-camera accessory flash. At this point, she asked, “How do you know when to use flash?”

This is an interesting question. While I might have answered “I use flash when the light levels are too low”, this is really no longer true, since the current crop of cameras is capable of insanely high ISO ratings. In theory, there aren’t many environments where a high ISO couldn't produce a usable image. There must be some other issues governing if, or when, one should pull out a speed light. I believe that the addition of a flash can completely change the appearance of a photo, allowing the photographer to direct the viewer’s attention to important areas in the photograph. I am therefore more likely to utilize a flash or two in my photographs than not.

I often find myself alone in my approach, since it appears that most photographers assume that there will always be enough available light to produce a proper exposure. This may be so, but relying on what is available puts you at the mercy of your lighting environment. Harsh, ceiling mounted light sources will create dark shadows devoid of detail.

It boils down to two basic questions: Is flash permitted, and if so, how will it improve the overall appearance of the image?

Permission To Flash: Let’s dispense with permissions. There are times when flash is inappropriate. Indoor stage performances are a universal no-no, especially when animals are involved. Frequent bursts of light will distract both the performers and the rest of the audience, so the best advice I can give is when in doubt, Don't. In other instances, particularly museums, exposure to bright lights could potentially accelerate the deterioration of the displays, so consider museums as absolute no-flash territory.

There will be some exceptions. The obligatory “picket fence” or “handshake” photos are fair game for flash work since the subjects expect it, and more importantly, the photos must turn out. I can’t say that I have never blown a handshake, but I have had some close calls where the image squeaked by through to the grace of post processing. Now, when I enter a new venue, I ask myself, “If I had to take a handshake photo, where would I stand?” If I can find a position with a nice bounce surface behind me and an appropriate background, I’ll remember it for possible use later on.

If flash is permitted, I must now consider whether flash will help, or hurt. In some instances, the available light will be satisfactory both in appearance and quantity. This is why my first test shot is usually an aperture priority available light shot. I have occasionally encountered professionally lit venues where the existing light was perfectly fine.

Once the decision is made to “flash”, the next decision is how it will contribute to the finished photo. Flash can contribute as a Key Light, a Fill Light, or an Accent Light.

Outdoor Flash Key Lighting: Under bright sunlit conditions, you’ll need lots and LOTS of light to overpower the sun. If you apply the “Sunny Sixteen Rule” to a possible outdoor shooting situation, you’ll know that on a sunny day, if you use an ISO of 200 and a shutter speed of 1/200 of a second, your shooting aperture will be F 16. With most speed lights, you’ll need a flash to subject distance of about five feet, which isn’t always easy to accomplish. 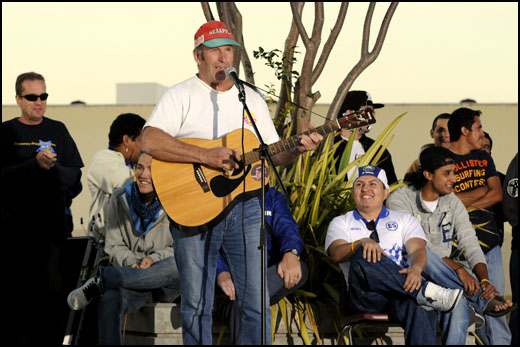 It is easier to use a key light flash if the ambient levels are less than "full sunlight". This shot was made in the early evening. The performer is essentially in the shadow of several buildings and has no direct sunlight illuminating him. If you look at his white shirt, you can still see some detail in the shadows. Light was provided by an 800 w/s Norman powerpack powering a flash head placed on a light stand 12 feet in the air and securely lashed to a flag pole 20 feet from the subjects. Exposure was 6.3 @ 1/125 of a second, ISO 200. 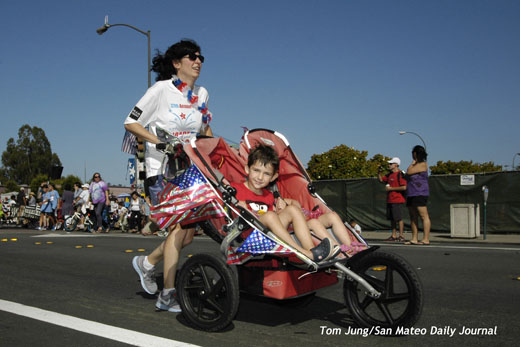 You can avoid the blown highlights by underexposing your subject slightly and allowing the fill light "take up the slack". In this photo, I decreased the metered exposure by about 2/3 of a stop before apply a TTL adjusted at my normal +2/3 stop. The shot, incidentally, was done at very close range using a wide angle lens. Keeping things level minimizes the disturbing effects of perspective distortion.

Accent Lighting: Accents can be added to provide additional detail in the background. You have a little more freedom about coverage, just a puddle of light to add some detail to the image. Certainly, we see accent lighting and accept that perfectly even lighting is not only difficult to create, but just a little boring. 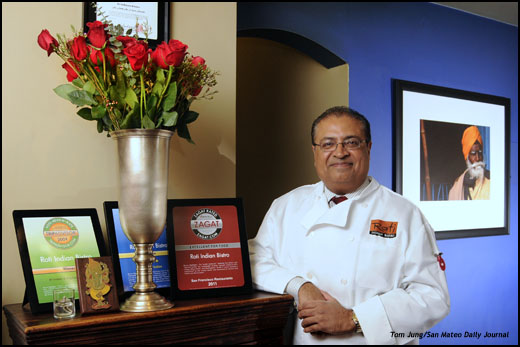 In this case, I used my usual Zumbrella for the foreground lighting. I noticed that the light fell off quickly, due in part to the angle of the wall. I placed a second remote SB-800 on a nearby staircase and aimed it directly at the painting, perpendicular to the surface. I didn't have a grid at the time, relying on a narrow beam angle adjustment to contain the light. It wasn't entirely successful because there is a definite hot spot below the center of the painting. If I had the time I could have fixed this, but with dinner guests just minutes away, my timely exit was probably more appreciated.


*Gobo is short for “Go Between Light”. They shield the lens from direct light coming toward the camera.
Posted by Tom Jung Photography at 12:10 PM No comments: