Wow. Halloween and International Day are the big events here at the Adult School. In both cases, costuming is the big thing, whether it be traditional, or whimsical, as they are here. These are outdoor events, so there will be issues with the ambient exposure, which usually means "the sky" when I shoot outdoors.

I decided to travel much lighter than in years past. For cameras, I carried a Fuji X100S with a wide angle adapter, giving me full flash synchronization with an effective full-frame focal length of 28mm.For lighting, I used an Adorama Radio Control manual flash in conjunction with a Lastolite Ezybox 24" softbox held aloft on a monopod. Cissie and I worked out the optimal subject to flash distance of four feet when the Fuji was set to 1/1000 of a second, ISO 200, F 5.6. I believe the power setting on the flash was 1/4, giving me 2 additional stops of exposure if I needed to move farther back.

Photo #1 was made with the Fuji, but at a greater distance than I had planned for. While my aperture stayed at (about) F 5.6, I upped the output to full, and lengthened the exposure to 1/250 of a second to allow for any time lag introduced by the radio transmitter. This insured that I'd get my full blast of light without any clipping. The longer exposure time did allow some of the ambient skylight to add to the the light provided by the flash, brightening the foreground a bit.

For longer shots, I had my D600 with a 24-70mm 2.8 lens. On my hip, a SB-900 with an SD-8a supplementary battery pack in a Think Tank Skin Strobe V2.0. Speedlight exposure compensation was set to -1.0 stop. I was hampered by the slow flash synchronization speed of 1/200 of a second, so I set the exposure mode to Shutter Priority and hoped for the best.. Speedlight Exposure Compensation was also set to -1.0 stop.


Fuji Heaven. This Fuji shot (Photo #2) could convince anybody that leaf shutters rock. The high sync speed, short exposure time, and the moderate aperture gave me a blue sky with a hint of clouds in the background. There is a trade-off when using radio triggers - shorter exposures will sometimes "clip" the flash, a case where the time lag present in all radio triggers causes some portion of the flash's output curve to occur as the shutter leaves are closing. 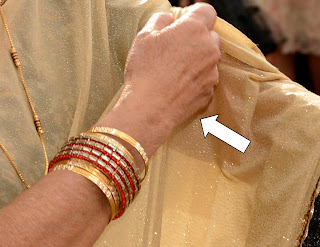 The Nikon Take: Using the Nikon with its slower sync speed, I would be forced to use smaller apertures, and potentially shorter working distances.
In this case, the flash only supplemented the existing light from the open sky (The day was cloudy). In this shot, my foreground subjects benefit from the speedlight. People in the background get little, if any, additional light, which helps the foreground stand proud in the shot (Photo #3).

You can see the close-up that a shadow is indeed cast by the on-camera speedlight, but it's relatively close to the lens axis, and therefore not readily apparent. That bit of light does add some sparkle to the bracelets, and pushes the color closer to a warm neutral, away from the cool blue of an open sky.

Visual Intuition: I was surprised by this particular photo (Photo #4) because it made me think "sunset". While I told Cissie to lower the light to get some light under the brim of the cowboy hat, it subliminally suggested the the "sun" was low on the horizon. Had I put a CTO gel on the flash, I could have completed the illusion. Alas, we are too soon old and too late smart.

Yes, Halloween was fun, and it seems to get "funner" every year!
Posted by Tom Jung Photography at 5:31 PM No comments: Links to this post