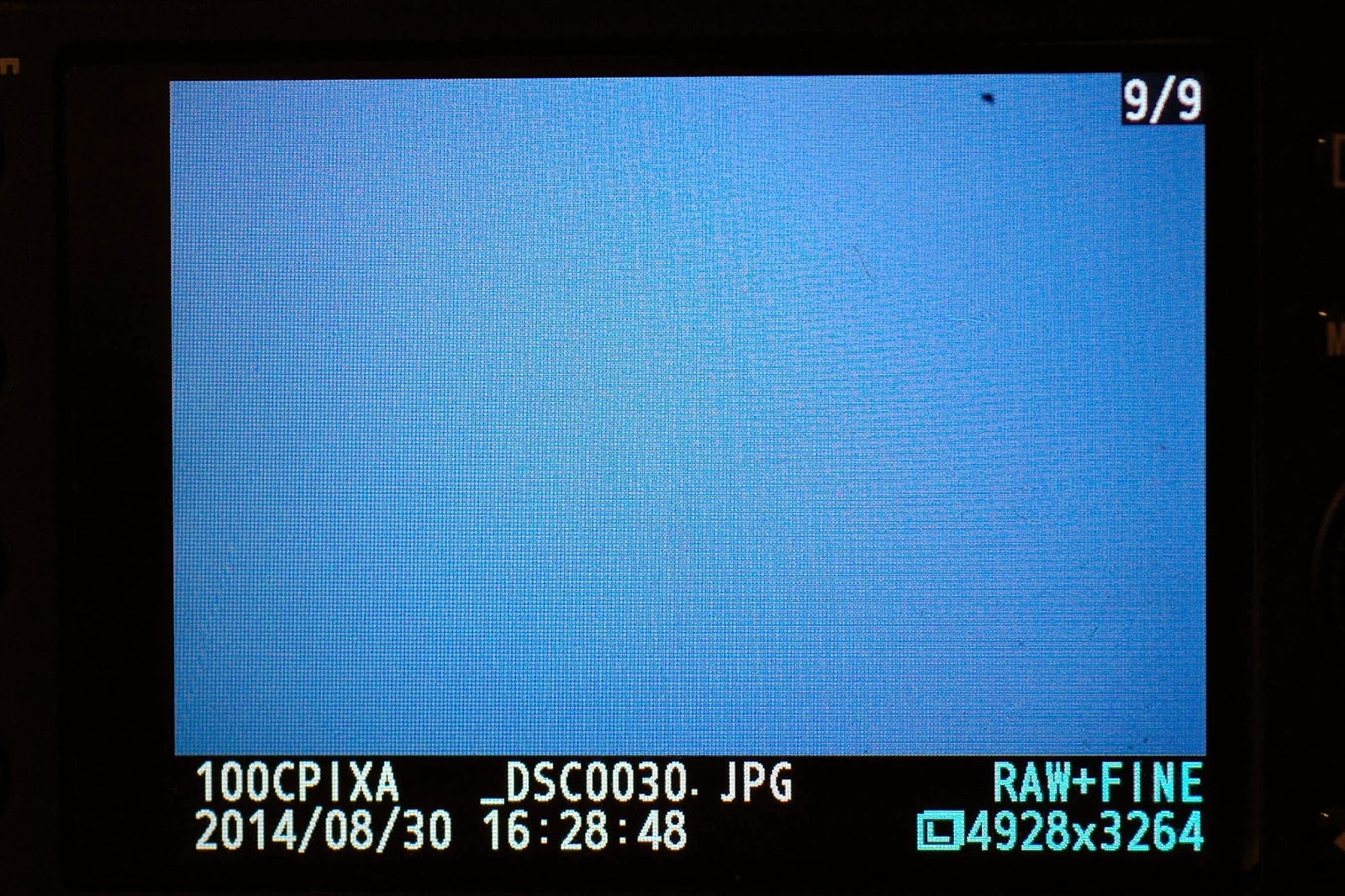 This is a photograph of the LCD display on my Nikon CoolPix A camera. You can see, near the top edge of the image, the shadow of an enormous dust spot. It is so big (and bad) that it is clearly visibly on the screen. What makes this unusual is the CoolPix A is a fixed lens super Point-And-Shoot, and one would have assumed that the camera was assembled in a clean-room environment. The camera is currently at the repair depot, patiently waiting for a technician to exorcize this unwanted intruder.

Dust on the camera's sensor (or in most cases, the low-pass filter) is a nuisance as inescapable as death and taxes. This situation is exacerbated by the very nature of digital photography. First, the decreased size of the APS sized sensor found in most amateur and prosumer digital single lens reflex (DSLR) bodies makes any tiny bit of airborne flotsam so much larger in proportion, just as dust became an issue when photographers went from large format roll film to the 35mm format. Also, the electronic nature of the sensor itself tends to attract dust due its normally electronically charged state.

There is a bit of a conundrum when it comes to finding dust. If you locate some dust, you can decide to send it our for cleaning, or simply ignore it. Dust particles become more noticeable when your lens shooting aperture gets smaller, which explains why dust can sometimes go unnoticed if you shoot wide open. Manufacturers tend to discourage owners from making sensor cleaning a do-it-yourself endeavor, and I for one follow that path. I normally use a Delkin Sensor Scope to periodically check my cameras, and when dust is discovered, attempted to blow it/them off the sensor with a Giottos Rocket Blaster. If that isn't enough to dislodge the little pest, I'll take it out for cleaning. Currently, I make the drive to Keebel and Shuchat Photography in Palo Alto and have them take care of it. For more information go to

I've adopted a quick and accessory-free way to detect sensor dust. While it's easy to do, it only works on the really bothersome (large) particles. Here's how I do it: 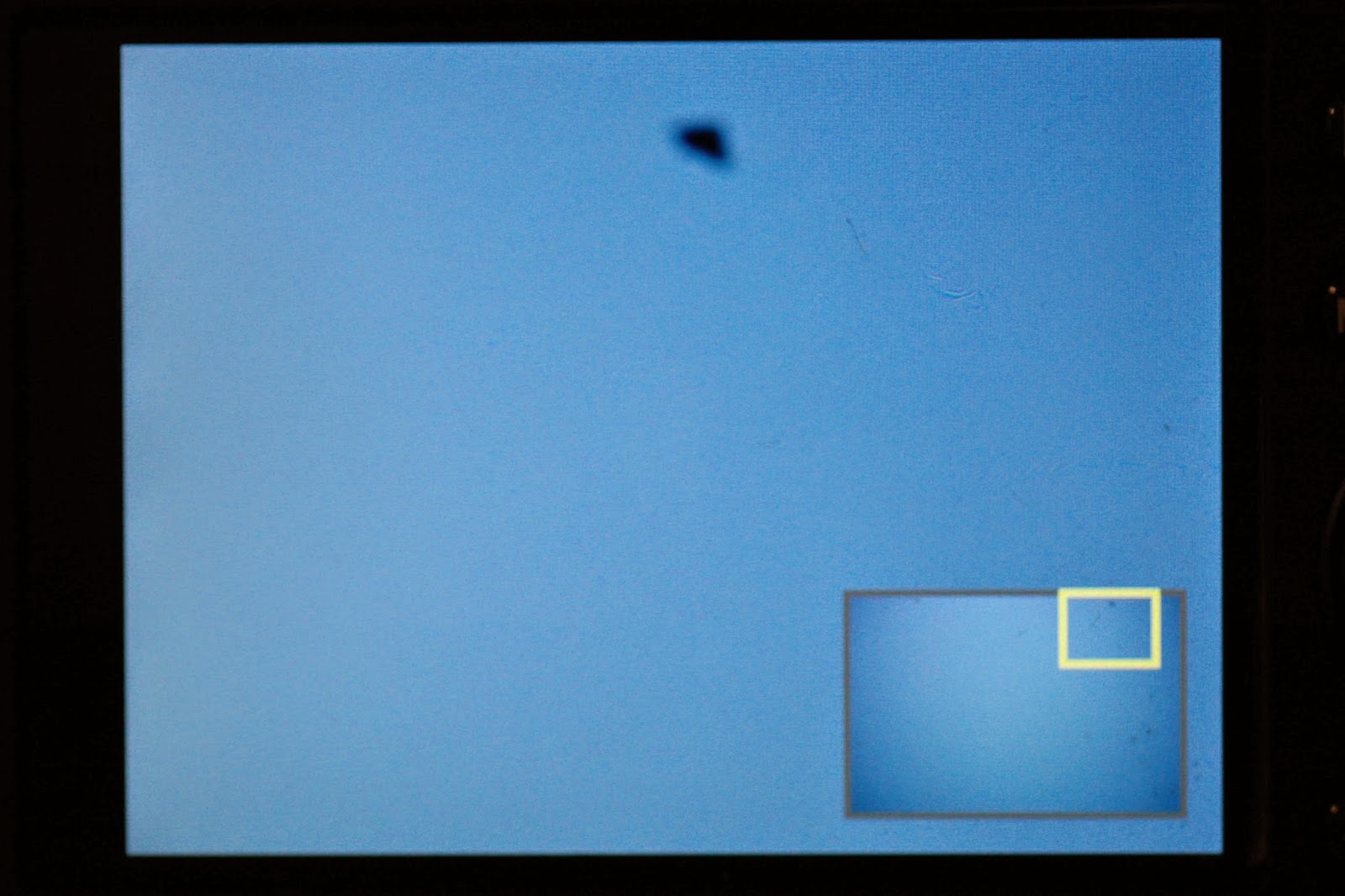 In this photo, you can see the spot and its approximate location near the edge of the sensor. At this point, you can use your Rocket Blaster to attempt to blow the particle away. Do NOT use compressed air, as the air stream may be strong enough to damage the lo-pass filter or the sensor, depending on your camera's design.

Dealing with dust is just a fact of life, but if you're an available light shooter working with more open apertures, you may never notice the presence of these tiny intruders. You may also tell yourself that cloning out a single speck of dust is not a big issue, but if you ever have to make two hundred identical photographs on a clean white background, that little retouching exercise will get pretty tiring after the first dozen.

Incidentally this specimen on my Coolpix A is the biggest dust spot I can remember. I'll be happy when it's removed.
Posted by Tom Jung Photography at 12:10 PM No comments: