Martin Luther King Day In San Mateo: For me, the MLK weekend is divided into two phases. On Saturday there is the Awards Ceremony for the winners of the essay and poetry contest held at the King Center in San Mateo. The following Monday, there is the boarding of the Freedom Train that will take passengers to the King Memorial in San Francisco. Each event requires two submissions. For the awards ceremony, one or more photos of the winners at the podium, followed by a posed group photo. For the Freedom Train, I need to submit one photo including the train, and one or more "faces" that capture the spirit of the event.

Motor Drives: For a film-shooting dinosaur like myself, the phrase "motor drive" evokes images of photographers with unlimited rolls of film and the money to process them. Depending on the speed of the unit, one sustained press of the shutter release could completely expose a 36-exposure role of Ektachrome in about 8 seconds, even faster if you could locked the mirror in the up position. Motor Drives (or automatic winders) had their place, and I longed for a time when I too could shoot in such a venue, one where true art would be created with every click of the shutter.

I actually bought an auto-winder for my Pentax ME Super in the early '70s, but never actually used it. It was neat to hear the click-click-click of the camera advancing imaginary film faster than I could have done it manually, but shuddered at the thought of paying for all that very expensive film. Owning a auto-winder was more of a symbolic purchase than a practical one.

Legendary Life Magazine photographer John Dominis had a cute story about the time he relied on a motor drive to photograph a spinning figure skater. He focused on the  skater and fired a burst of exposures, assuming that his motor drive could capture at least one usable image of the skater's face. When his film was processed, he discovered that he made about a dozen perfectly exposed and focused frames - all of her back.

MLK Day And The Freedom Train: I decided to use the continuous shooting mode on my Fuji X-T1 to get my "all aboard" photo. In years past, I found out the hard way that the opportunity window for this photo was very brief, and having never used this feature on an assignment, decided to give it a try. In this sequence, I selected the elements I wanted to include (the San Mateo sign, the side of the train, and several people getting on board), 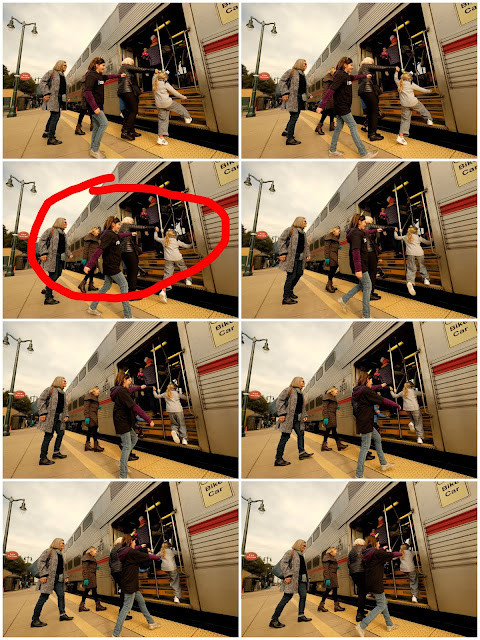 Rock And Roll: For this shot, I spoke with this family a few minutes before boarding, and ask that they all walked to the train so I could see their faces. I also reminded them that I wanted them to be sure that they didn't trip, so I asked that they were careful to "mind the gap". I selected this composition, set the Fuji X-T1 to 8 frames per second, and when the doors opened, fired off a burst. It was interesting to view the images in post processing and to see the subtle position changes my subjects made as they boarded. I chose the third image where nearly all the boarders were visible.

White Balance Presets: The Fuji cameras don't have an Open Shade preset, so I opted to set the white balance to 7000K. This gave the image an overall pleasing warmth. The Cloudy/Overcast preset may have worked, but I really like how this shot turned out. 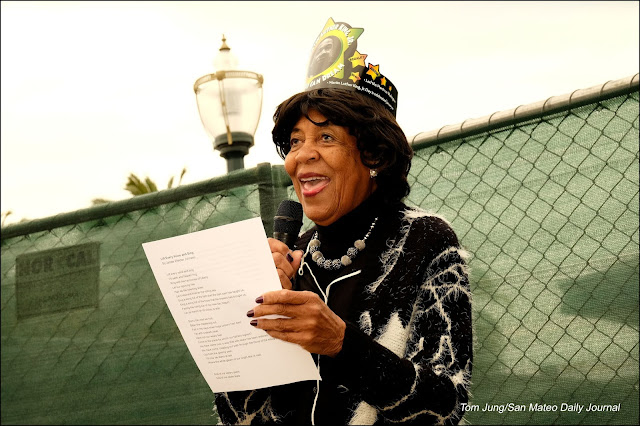 Flash On An Overcast Day? You Betcha! In this photo, Marie Davis sings "Lift Every Voice And Sing" at the conclusion of the ceremony. 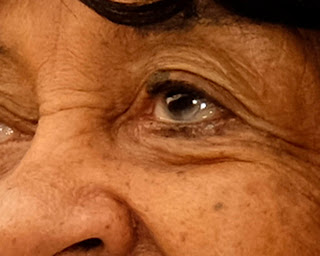 Even though the day was cloudy/overcast, I decided to add a tight snoot on the on-camera flash so I could add a narrow splash of light on Ms. Davis' face. I used the flexible rubber snoot designed for use with the Godox round-headed flash. This added a sparkle to her earrings and necklace, along with some tiny catchlights to her eyes. One note of caution: The snoot reduces the effective efficiency of the flash, so you'll find yourself dumping a lot of light just to get a little lightening.

Just for fun, I zoomed in on Ms. Davis' left eye, and found two catchlights. I can only assume the twin reflections were the result of a contact lens. 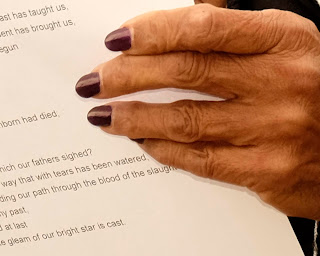 The on-camera flash does cast a shadow, which you barely can see along the lower edge of her hand. I'm sure that if she weren't holding the lyrics, you would have no evidence of the fill flash.

I continue to be amazed by the sharpness of the 16-55mm F 2.8 Fuji lens. In this super-crop, you can actually read the lyrics. This level of sharpness would have been impressive for a prime lens, and for a zoom lens, incredible.

Well done, Fuji!
Posted by Tom Jung Photography at 12:10 PM No comments: Links to this post