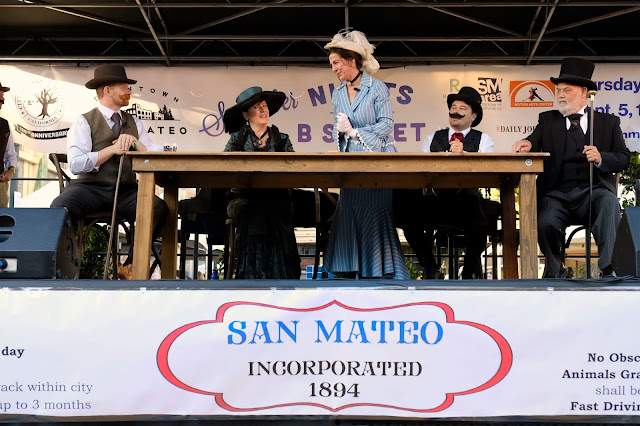 The Shot I Was Sent To Get: The city of San Mateo turned 125 this week, and celebrated with three Thursday evenings of music, dance, and a proper homage to the Founding Fathers, and Mothers, of this wonderful city on the San Francisco Peninsula. Here Mayor Diane Papan (standing, center) along with some thespian Board Members, reenacted the early days of the city's creation. The stage skirt with its bright San Mateo banner, gave context to the photo, but inits inclusion forced a split composition and while adding some distracting text at the left and right side of the frame. Nevertheless, was exactly what the Editor In Chief wanted. And since the photo was made within the first ten minutes of the three-day celebration, I was free to make photos of the things I thought were interesting. These samples were taken from all three evenings, so if you're looking for continuity, you won't find any here.

Available Light: I appreciate the quality afforded the Fuji user when it comes to working with high ISO settings. Theoretically, its the lack of a low-pass filter is the reason. I much prefer the Fuji's performance to that of my older Nikon DSLRs. Working with the 50-140 2.8 Fuji lens, I was able to make some tight head shots from in front of, and behind, the stage. 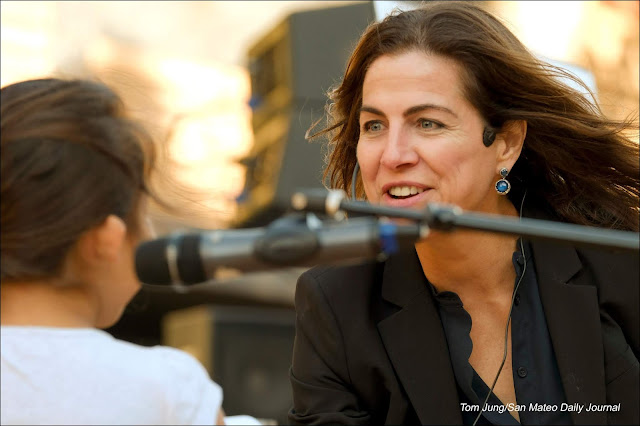 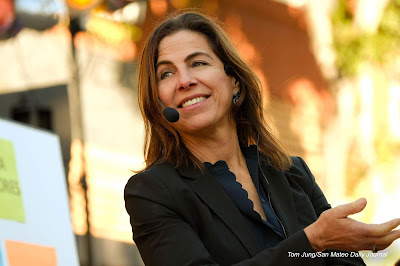 In the above shot, the Mayor of San Mateo was working with a young San Mateo Trivia contestant. As an informal head shot, the composition has some desirable attributes. Both eyes are visible to the  camera and the mouth is not clipped by the microphone.

A less desirable shot can be seen at the right. Notice that the fingertips are clipped slightly. This wasn't the sign of poor cropping, but one of poor framing.  Since I couldn't get the composition adjusted in time, I would not normally include this image in a collection of favorite images. But it is a sample of an image that I would not normally submit for publication. 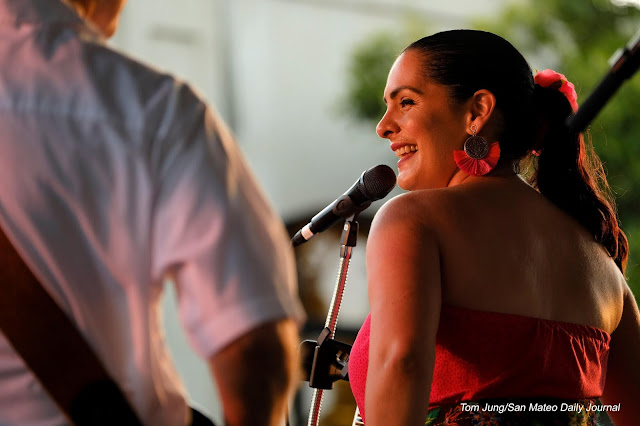 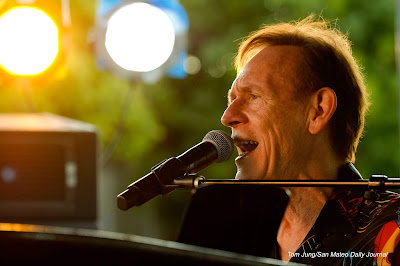 Shooting From Behind The  Stage: All during the three-day celebration, I wandered around the stage, trying to make a photo with more dramatic lighting. In both of these samples, the stage lighting provided both a rim light and a short lighting opportunities. In both cases you can see that the light skims over the near side of my subjects' faces, yet provides a splash of light on the ear.

In these last two photos, I didn't correct for the obvious white balance mismatch. The effect gives the photo a more theatrical feel to the images. And by the way, these are shots you'll have to "chimp" to get the exposure where you want it. 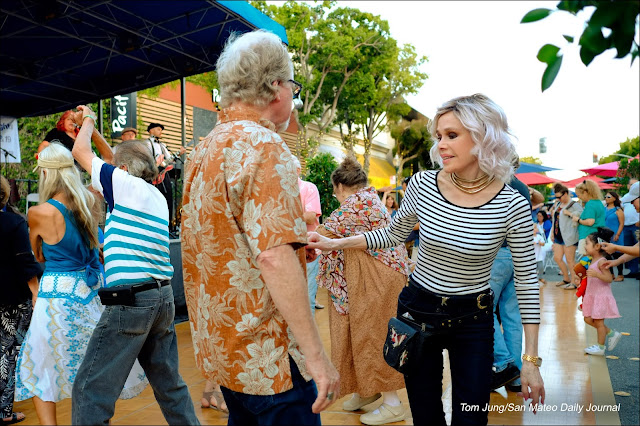 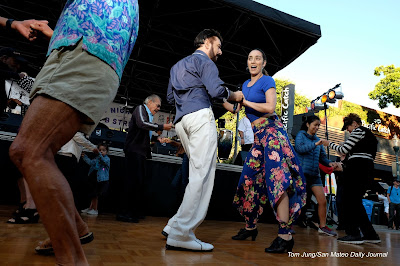 Flash Augmentation In The Twilight Hour: I decided to practice mixing flash with the fading light of the late afternoon. Shooting in the twilight hour makes it much easier to balance ambient with flash, since the light levels are much lower. In the above shot, I held the flash at arm's length and aimed it directly at my main subjects. In the shot on the left, I purposely "skimmed" the light in an attempt to prevent severe overexposure of anything that was closer to me than my intended subject.  Here, I did my best to minimize the light hitting the headless dancer on the left of the frame. A minor amount of burning would bring the shirt to a brightness level closer to my main subject, the couple in the middle. As a technical matter, I was holding the camera about one foot off the ground, and held my flash high overhead using a short, 24" monopod. 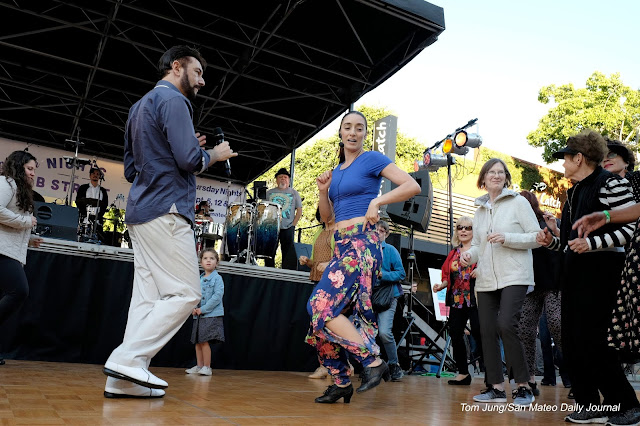 In this shot, I re-framed the composition to place my female dance closer to the center and to include some of her "students" in the right side of the frame. Notice that the flash is just bright enough to cast a shadow beneath the chin of my Lady In Blue. I like the effect because it provides some subtle shaping of the facial features while providing some highlights I wouldn't be there if I relied on available light. 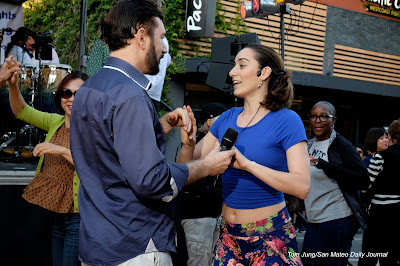 To avoid collisions, all of my shots were made for the edge of the designated dance floor. I decided to change things up and try for a shot that emphasized the dancers themselves. For this shot on the right I just "zoomed in", hoping to get a good facial expression on my dancer, something that would reflect the infectious mood the Salsa rhythms. Try as I did, I never got an expression of excitement  I was hoping for.

I did manage to make a shot of this young lady learning how to waltz, and I was intrigued by her rapt expression. I don't exactly know what she was thinking at the time, but her partner appears to be a really lucky guy. 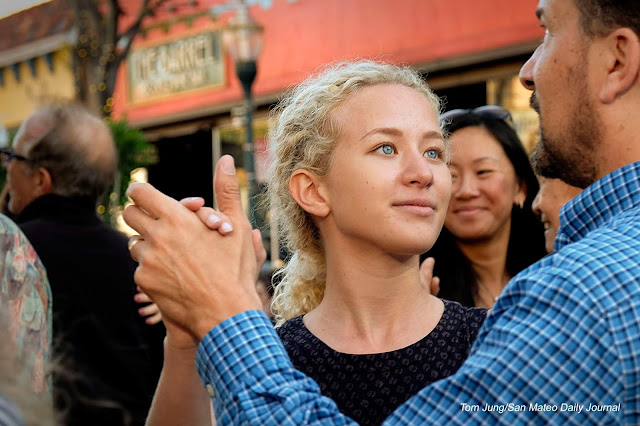 In an earlier post I made some observations about the Godox V1 round-headed flash, aka Adorama's Flashpoint Zoom Li-on x R2 TTL Round Flash Speedlight. They are one and the same. This installment is to address the issue of color correction gels. It was introduced in early 2019, and it made quite a splash because until that point, those wishing the convenience of TTL metering combined with the even lighting pattern of a parabolic reflector had only one choice: The Profoto A1 Studio Light.  At $800.00, the flash, though very versatile, was expensive for what you were getting. In spite of the hype, it is NOT a replacement for a studio flash, but can serve a photographer well if s/he knows its limitations. For the cost of a single A1, you could buy three Godox V1 flashes, which if you're not a hard on your equipment, would provide years of service. I purchased two V1s: One is dedicated for Nikon and the other for Fuji. And in a pinch, both can be simultaneously adjusted using a single dedicated, on-camera Flashpoint or Godox controller. Honestly, there's a lot of value in the Godox.


The flash's round head is a double-edged sword. The parabolic reflector gives a very even light pattern without any obvious hot spots. However, the head shape makes it incompatible with many popular on-camera light modifiers. Neither the Gary Fong Light Sphere nor any of the Mag Mod accessories can be used with the V1, which for me is a definite drawback. A variety of add-on accessories are included with the Round Head Flash Kit (about $60), which includes a set of barn doors, a snoot, a bounce card, and a grid that are held to the flash head with magnets. Also included are some accessories for changing the flash color, including three warming filters, one florescent green color correction filter, and two clear filters along with a magnetic filter holder which are sold separately as the AK-R16 Gel Set (about $10) which is sold separately. Us this kit to attach any gels you may choose to cut from the CTO gel sheets you may already have on hand.

If you are interested in more precise color adjustment or don't want to do the cutting yourself, you'll need to add the Color Temperature Adjustment Set (about $15) provides 16 pairs of pre-cut color correction gels (CTOs, the CTBs, and the Plus Green gels). One photo of the product on the Adorama website shows how a round, blue gel is sandwiched between the two clear gel holders that came with the Flash Kit.

While I'm waiting for the Adjustment Set to arrive, I will find my stash of gel sheets and cut myself a full and quarter CTO gel to use when balancing incandescent ambient lighting or to warming up a subject.

To install one of the pre-cut gels, you lock one of the clear retaining disks into the slots inside the holder. Next, drop in the gel of your choice. Finally, attach the filter holder to the flash head. The gel will be held in place between the clear gel holder and the flash. This is the simplest method, although storing the relatively fragile gels may become a problem. I'm thinking about using a fly-fisher's leader wallet, which I found on Amazon. It's certainly large enough to accommodate these gel and keep them safe and organized. 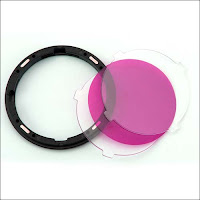 This closeup photo makes it easier to see the retaining tabs, along with a magenta gel sandwiched between the two retaining disks.

I am looking forward to the speed and convenience of mounting a magnetically attached CTO gel to the Godox flash. Although I purchased the full Mag Mod kit, I never really liked the gel attachment system. This approach for the V1 is just as fast and much more compact.

Finally, a warning: The flashtubes generate a fair amount of heat, and if you attempt to machine-gun your flash exposures, you might fuse the gel to one of the filter retaining disks. So slow down.
Posted by Tom Jung Photography at 12:10 PM No comments: Links to this post