I Too Have Fallen For Emily Blunt 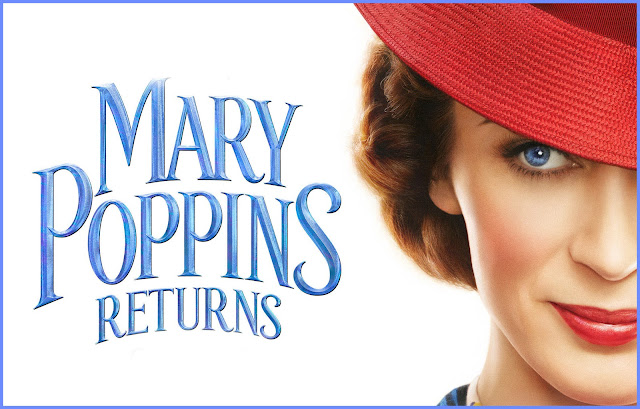 
I wasn't an Emily Blunt fan, since I only knew her as the snarky office assistant in The Devil Wears Prada, a film in which I was actually rooting for the Anne Hathaway character. Come to think of it, I don't remember being enchanted with the original Mary Poppins, although I totally adore Julie Andrews, more for her performance of the Jewish Wedding Song in Thoroughly Modern Millie. Did I mention I like Klesmer music?

This posting is about some really magical things. From a photographic standpoint, the promotional image manages to distill the most essential elements of a themed portrait, one that manages to isolate the important visual elements of Ms. Blunt's characterization of the iconic nanny. By framing the face with the brim of  a Poppin-esque hat, the viewer's attention is drawn to a single eye,  while the red color accentuates her mischievous half-smile. This portrait is a beautiful distillation of the basic facial features that evoke the whimsical nature of the character and the film.

From an emotional standpoint, the music of the 2018 release plays proper homage to the songs of the 1964 original. However, the music and lyrics are, in my opinion, written to a much higher level of sophistication, so much so that one song in particular, "The Place Where Lost Things Go" reaches deep to where the emptiness left by the loss of a loved one hides. Performed as a lullaby, it served to frame one's sorrow as a void to be filled by one's treasured memories, presented in a way that a child might understand.


I've listened to the song enough times to not tear up as I try to understand why life seems to have stopped giving me things, and started taking them away. Take some time to hear the song all the way through, and maybe it will provide some comfort in dealing with the changes you didn't choose to make.
Posted by Tom Jung Photography at 12:10 PM No comments: Links to this post