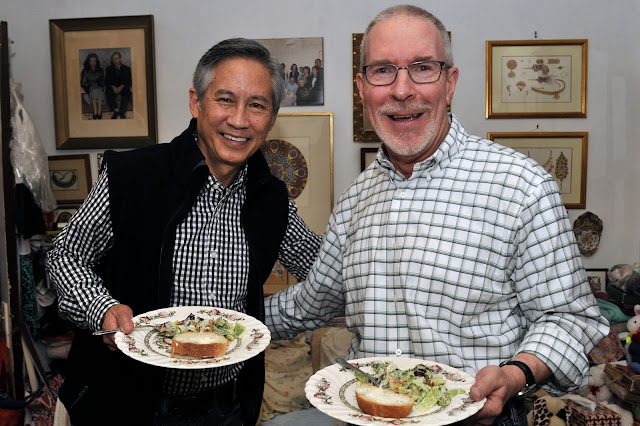 My friends Mike and Bob wish you all a Happy Thanksgiving!
Posted by Tom Jung Photography at 12:10 PM No comments: Links to this post

Veterans Day: Besides what we know about Veterans Day (commemorates the end of World War I), I added to that an epiphany that occurred when I submitted two images (Photo #1, Photo #2) for publication in the Journal. Photo #1 was the stronger image, and I thought it would look great on the front page, at the crease, the place most stand alone photos wind up. I thought the blue, white, and red bunting in the background did a good job of framing my bugler, who was playing "Taps" when the photo was taken. Taps. Remember that.
Photo #2 of Major General Alvin was made a relatively close range with a bit of flash added to lighten the shadows. While shaking the hand of a veteran with his right hand, he prepares to present a Viet Nam era commemorative pin with his left. His winning smile and this impressive collection of service ribbons made for a great photo. To his credit, Major General Alvin had a kind word to say to each veteran who came forward to receive his pin.

Getting the photo required a bit of chutzpah on my part. If you look at the background, you an see the audience looking directly at you. I literally had to run "back stage" and shoot forward, the only way I was going to get close enough for the fill flash to have some impact on the exposure. If you look at the back of the man at camera left, you can see the shadows of the flash as it passed through the steel grate that separates me from my subjects. Luckily, I was able to squeeze my lens into the gaps between the supports.  I felt a little funny stepping backstage as I did, but I don't think anybody minded. I beat two other photographers to the "sweet spot",and both had a "Why didn't I think of that?" look on their faces when the ceremony concluded.

The Epiphany: My Editor In Chief  chose to go with Photo #2, and after some reflection, I saw the wisdom in his decision. My first photo of the bugler playing Taps brings to mind a memorial service, or a funeral. Hmmmm. MEMORIAL day. This is a better MEMORIAL Day photo. Photo #2 shows appreciation for VETERANS who are accepting thanks for their service to our country. Living veterans. Veterans Day should have a more celebratory feeling, and to that end, the more appropriate photo was printed.

The Lenses: Photos #1 and #3 were made with a Sigma 170-500 lens I purchased a few years back. It is my Memorial Day go-to lens, providing the flattened perspective that only a long lens, used a a great distance, can provide. I emphasize the distance aspect because those blurred backgrounds are the result of the increased working distances that only a long lens can provide. Check this post for a detailed explanation on how this works. My flutist is playing under a tent-line enclosure, which is the reason for the blown highlights you seen in the distance behind her.

I've owned the lens for a number of years, and rely on it when I need to make a long-distance shot. Like most Sigmas, the zoom rotation follows the Canon standard, which is the opposite of what we Nikon shooters are used to. Due to its size and weight, I've taken to carrying it on a Black Rapid Sport Breath strap that has a broad shoulder pad for comfort, and a screw eye that attaches to the tripod bracket to take the strain off of the strap lugs on the camera body. This bulky lens is truly the "tail that wags the dog", and every effort should be taken to improve the ease of carry. One great thing about the lens is the image stabilization feature, since it would be nearly impossible to hand-hold the lens without it. And since I mount it on an APS crop body, it's really a 750mm lens, making it all the more mighty. It never fails to draw comments from the people I pass, and since it is almost 2 feet long when extended (with the lens hood), it should.

Taking Flash To The Limit: This last shot is a all-to-common photo of a Color Guard preparing to present the colors. The shot is a reminder that DSLRs have their limitations so far as outdoor flash is concerned. Shot at 1/200 of a second with an aperture of F 14, my lone speedlight, mounted in the hotshoe, barely lit my subjects, even when the zoom angle of the flash was quite narrow and the output at full power. The flash, an SB-800, was plugged into an SD-8a battery pack, and the combination gave me a reasonably short recycle time. I carried them both in a Think Tank Skin Strobe, a very handy accessory to have, although I wish it was easier to attach to my belt.

I try to learn something on every assignment, and this time, it was finding a better vantage point from which to shoot. I was very happy with the results that came from taking that chance.
Posted by Tom Jung Photography at 12:10 PM No comments: Links to this post

Halloween Hunt is a chance for youngsters to go Trick or Treating on a Saturday afternoon with their parents. A neat trick, this. Kids go from business to business, collecting treats while dragging / exposing their parents into stores they might not otherwise visit. With each visit, they must check off the location to be eligible for a prize at the end of the day. These photos were taken at B Street Books, and here a young woman named Aurora, dressed as the fictional orphan Madeline, gives candy to a family of youngsters.

In retrospect, Photo #1 was actually the best of the lot. All of the faces are visible, and all are looking at the card Madeline is about to check off. I used straight ceiling bounce for the shot, and got enough light bounce for reasonable shadow detail. However, I felt the shadows would be too dark to reproduce properly so I didn't bother to get my subject's names for a potential caption.

For Photo #2, I pulled out the built-in bounce card for some added fill. I still marvel at how this simple addition can improve the foreground detail of the shot, but there can be a double shadow on your closest subjects (one shadow from the light bounced from the ceiling and a second from the bounce card itself. You can see the soft shadow edge following the jawline of the young man in green, but a much stronger one on in the foreground Wonder Woman. This is the shot I would ultimately submit.

Bounced Fill Light: Moving to the alcove of the event "headquarters", I bounced my speedlight against the ceiling/wall junction behind me to balance the diffused sunlight on my subject's face (Photo #3). The leaf shutter on the Fuji X100T allowed me to use a short exposure / high ISO combination to maximize the output of the shoe-mounted Nikon SB-800 (exposed manually).

Bounced Main Light: This last shot is an example of when the flash is the dominant light source. Again, using the walls and ceiling of the alcove as a bounce surface, I was able to get a very nice exposure with no prominent blown highlights. I didn't bother to submit Photos #4 or #5 because I liked #2 so much.

Cute Kids Always Sell: Probably the paramount rule in my community photography is to include some kids in your shot. On Halloween, or on an event like this one, it's a target rich environment.
Posted by Tom Jung Photography at 5:16 PM No comments: Links to this post