Certificates of Naturalization At The Paramount 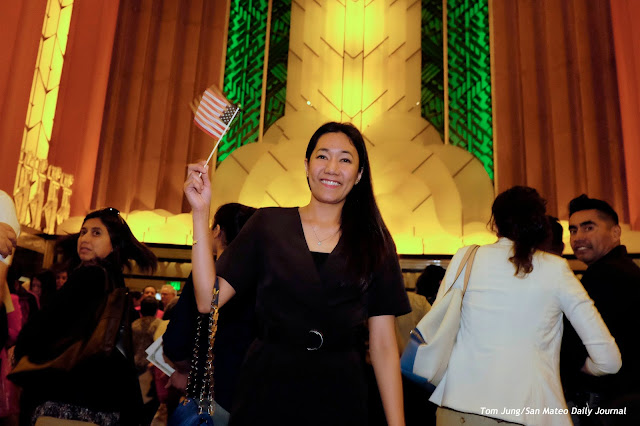 The assignment was to photograph some newly naturalized citizens at the Swearing In Ceremony at the Paramount Theater in Oakland, California. I had heard so much about the restoration of the grand movie house, but had never actually been there. For whatever reason, I don't care much for Oakland, probably because I know very little about it, and only visit when I must. This was one such day. 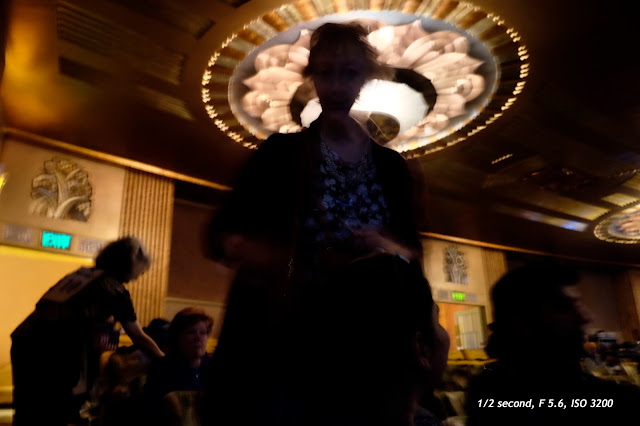 This sketch shot shows you how little light there was to work with. The low angle would allow me to use the ceiling lighting fixture as a background, as long as I could get the exposure under control. With these settings I nearly did, but the long exposure time made for a blurry mess.


My three Citizen Subjects were identified by my editor, and of the three, I chose this one for a shot made inside of the theater. I knew that I had two exposure planes to contend with: the ceiling mounted wall fixture and my subject's face. It's easier to establish the proper background exposure first, and then adjust the flash output to properly light the subject. You can see in this sketch shot how the shot would look without any flash.

I gave my subject one of the three small prop American flags I brought for my subjects to hold. It turns out that everyone was given a flag, which explains why my subject is holding two. Final exposure was 1/15 of a second, F 4.0, ISO 3200. I bounced a Fuji EF-42 in the manual mode off of the wall to my left. I don't remember what the output was, but I suspect it was 1/8 power. The color shifted somewhat due to the golden paint given to the walls, but the final result is certainly acceptable. The exposure adjustments made in post production coupled with the three f-stop exposure adjustment are probably to blame for the exposure variations.

Butterfly Lighting: This image was the most pleasing of the dozens I made, probably because of the expression and the Butterfly Lighting Pattern. Notice that she's facing into the light. You can see the highlight on the plane of the face, and the slight shadow created on the left side of her face. Big catchlights, great smile, what's not to like? 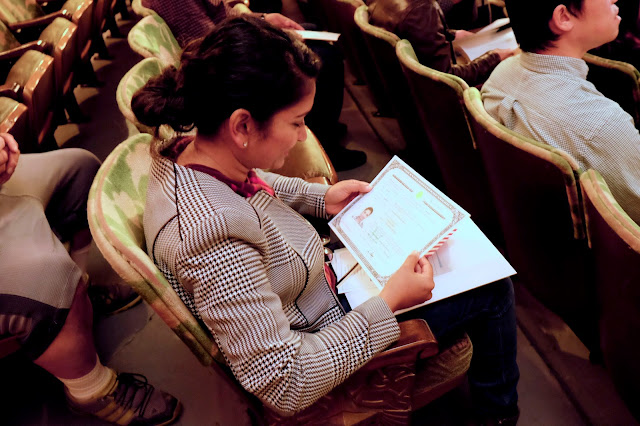 This shot shows my subject looking at her Certificate of Naturalization. I submit this photo as an alternative to the "flag" photo because it was presented along with the photo at the top of the post, there might be too much flag and not enough variety. 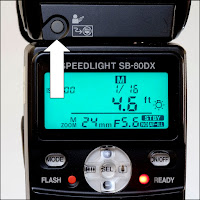 SB-80 To The Rescue: While fumbling in the darkness of the auditorium, I remembered that the SB-80 in my bag had a Modeling Light Feature. By pressing a button on the back of the speedlight, you have a relatively bright flashlight to help me find my way around in the dark. It's funny because I thought about including a small flashlight, but concluded I wouldn't need it. Dumb, dumb, dumb.

I found out that the Modeling Light feature doesn't work when the speedlight is in the Optical Slave (SU-4) mode. Since the SB-80 was already in the slave mode, the modeling light didn't work immediately. It took a few moments to set everything back to "normal" for it to work. Come to think of it, the little pictograph does suggest that the feature doesn't work when the "squiggly arrow mode", the symbol used to represent the optical slave setting is active.

Oh! So that's what it means! 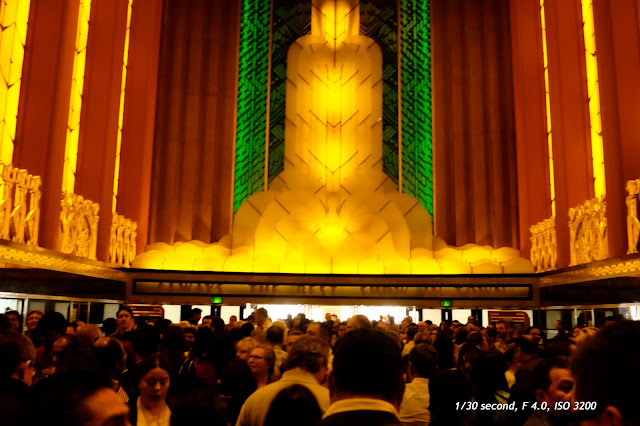 The Lobby Shot: This shot was made because my second subject couldn't be photographed in the theater itself because she was seated where there was no way to supplement the existing lighting without annoying the entire audience. She was, however, extensively quoted in the article, so a shot was definitely needed. And while I was prepared the photograph my subjects outside, the view from within was too beautiful to pass up. So I made a quick base exposure, and went about finding my subject, which in a crowd this large was no easy task. 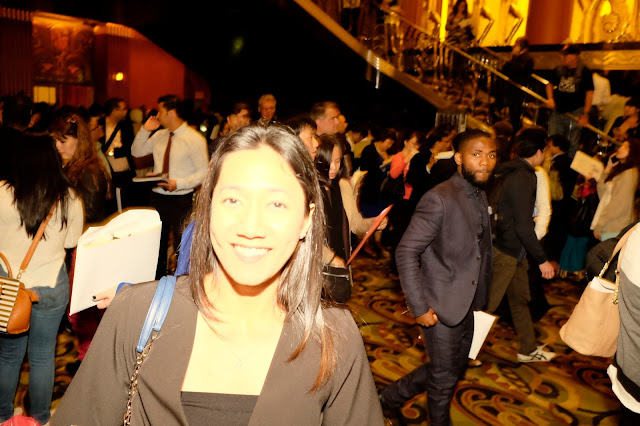 When we finally go together, I made a test shot using a Flash Point Li-On Manual speedlight aimed vertically an bounced off of a paper plate. This first exposure was probable around 1/4 power, and as you can see, way over exposed. 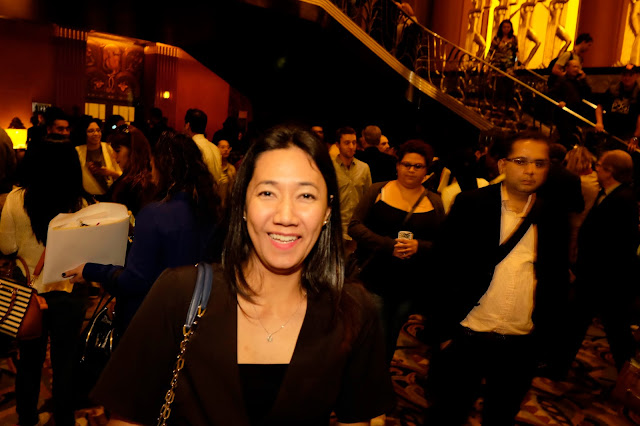 By dropping the output to 1/128, I was now in the ball park. I re-positioned my subject in the middle of the lobby, directly in front of the green and gold backdrop. 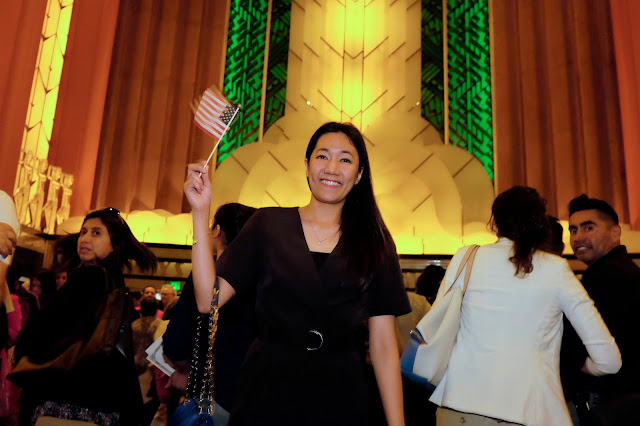 It might have been fun if my subject and I were surrounded by a larger crowd, but this shot gives a sense of the size of the event. Again, it was lit by bouncing a speedlight off of a paper plate, an odd thing to find in a camera bag. I used it a few weeks ago, and was glad I had it with me, since I couldn't find any of my Lumiquest 80/20s, and I own several.

I like the rendering of the flash tones. I combined a 1/4 CTO with a White Balance setting of 6700K, which appears to have warmed the image just a bit.
Posted by Tom Jung Photography at 12:10 PM No comments: Links to this post