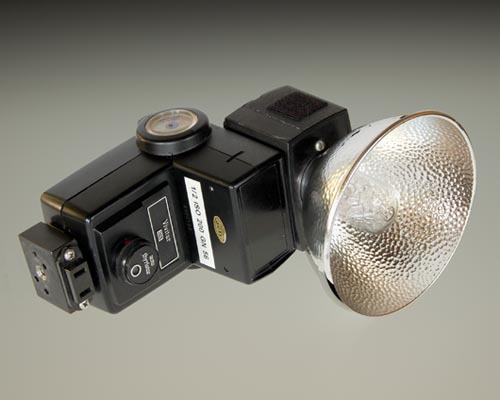 If you spend as much time on E-Bay as I do, you will see the word "Strobist" appear in the descriptions of countless speedlight accessories. I purchased one such item several years ago, a Vivitar 283 modified to give "Strobist Quality Lighting". It has a parabolic reflector and an interchangeable flash tube. And while this hybrid flash will probably raise some eyebrows today, the "bare bulb" conversions to Vivitar 283's and to a lesser extent 285's were the hot ticket back in the day. Click here for some background information on the original 283 and 285 models. But more on this unique conversion later.


It's easy to wonder why anybody would go to such lengths to produce this "frankenflash". Come onto me, my young padawan learner, and talk I will of the glorious Vivitar years, and some of the more common accessories and modifications.

Ubiquitous: Since it's introduction in 1970, 3 million had been produced in the first 4 years of production, earning it the adjective "ubiquitous". Both amateurs and professionals bought them in droves because they were adaptable, reliable, and relatively inexpensive. While the 283 has been discontinued for many years, dozens of them, along with a wide range of accessories, can be found on E-Bay.

Exposure Automation: One of reasons for its universal appeal is that it has an early form of automated exposure compensation which would work on any camera with a standard hot shoe or PC outlet. When the flash is fired, a built-in sensor measures the amount of light reflected from the subject and stops the flow of light when a predetermined amount of light has been detected. This reflected light will produce a proper exposure for a number of f-stop/ISO combinations. An indicator dial identifies four colored zone settings. As a quick example, the "red" setting, the one that I generally use, will give a "proper" exposure for the following combinations: 5.6 @ ISO 200, 8.0 @ ISO 400, and 4.0 @ ISO 100, up to a very optimistic maximum distance of about 30 feet. The "blue" setting supports the following combinations: 11 @ 200, 16 @ 400, and 8 @ 100, with a theoretical maximum distance of 15 feet. As with all things, performance varies with lighting conditions, subject reflectivity, battery strength, and the phase of the  moon. At longer distances and smaller apertures, the recycling time can be painful.

While the new TTl (through-the-lens) flash metering systems are the current norm, this flash-based system does work well (enough) under most conditions. And when the conditions are less than ideal, you can always go manual.

Manual Settings: As issued, the sensor had an "M" setting for Manual. This mode was "all or nothing"; it would allow you to dump the entire output in a single discharge. You could also replace the sensor with an accessory called the VP-1, which would allow you to steplessly adjust the output from full through 1/64 power which represents a range of 6 f-stops. As you can see from the link, it is no longer available new, but can sometimes be found on E-Bay, again at very inflated prices.

Beam Modifiers: An accessory adapter could be purchased to allow the attachment of one or mere plastic lenses to vary the flash's output angle. Both wide angle and telephoto filters were available to match the coverage of the 24, 28, 70 and 135 mm lenses. Colored filter sets were available in Red, Blue, Yellow, 85B (daylight to 3200K), UV and Neutral Density 4X. A special adapter held the filters in place. However, the installation of the new reflectror and flash tube prevents their use on my modified 283.

Conversions: The 283's versatility inspired conversions beyond simple add-on accessories. Several small shops were converting the 283 and later 285 flashes to accept a parabolic reflector and a larger flash tube. The name that keeps coming up is "Armatar", which I believe was a small shop in New York that made many of the conversions. In addition to the bare bulb/parabolic reflector modifications, they could also increase the output to 100 and 200 watt-seconds. The parabolic reflector coupled with the large flash tube helped to overcome to problems common with most other flashes, including the unmodified 283. Out of the box, the light coming from the unmodified flash tube produced a rather harsh light with a "hot spot" in the center. This was due, in part, the the mounting of the flash tube perpendicular to the line of illumination, which allowed a large percentage of the outgoing light to strike the subject head on. Mounting the flash tube on-axis with to the line of illumination forced nearly all of  the light to travel sideways and be reflected onto the subject by the parabolic reflector. A flash so modified would produce a beam pattern with a gentle fall-off at the edges. In addition, some photographers removed the reflector entirely, allowing the bare flash tube to scatter the light and illuminate a much wider area. That was the theory at least, and in some cases (think small rooms with light-colored walls) it actually worked. I most cases, however, it was simply a waste of light output, since nearly 3/4 of the light was directed away from the subject, never to be seen again.

Replacement Feet: Another modification thought necessary by many photographers was the replacement of the plastic mounting foot with one made from aluminum, or at least a metal of similar strength. Holly seems to have been the gold standard, as they were beautifully machined from solid aluminum and converted the proprietary Vivitar cable with the more standard "household" or "H" plug. If you look closely at the photo, you will see the two slots that accept the sync cable's prongs. On reason given for the foot's somewhat fragile construction was that if the flash was bumped HARD, the foot would break, preventing damage to the camera's integral hot shoe, which was infinitely more expensive to repair. With that line of reasoning, a metal replacement foot seems counter-intuitive.

The Frankenflash In Use: I still like to use the flash from time to time. I have used it mounted on a CB Junior flash bracket connected with a Household / locking PC cable connected to a Wein Safe Sync. I usually put a 1/4 CTO (a gel warming filter from Rosco) when I can afford to lose a bit of light. The built-in flash automation allows me set my aperture at 5.6 at an ISO of 200 and pretty much forget about it. I tend to use wide angle lenses, so my corresponding flash-to-subject distances are generally quite short. When working outdoors, I alternatively mount the flash on a monopod. I can trigger it with the cabling setup I described, or attached a small, cheap E-Bay flash trigger using Velcro and a short PC to Household cable.This gives me a little more flexibility in light placement, but restricts me to a maximum synchronization speed of 1/800 of a second when used with a Nikon D70/D70s body. However, I do not use a Safe Sync between the flash the the radio receiver. If the Vivitar fries it, I'll just put on another.

Disclaimer: The Vivitar 283 has the earned reputation of burning out hot-shoe equipped cameras due to it extremely high triggering voltage. It is recommended that these flashes, and other flashes made in the last century, should NEVER be attached directly to the camera. I will not enter the debate concerning the safety of the Japanese, Korean, and Chinese iterations of the flash. If you decide to experiment with these older units on a modern camera, you do so at your own risk.
Posted by Tom Jung Photography at 12:10 AM