Maybe I was the one who started using the term "picket fence" to describe a posed shot where everybody stood shoulder to shoulder, looked directly into the camera, and gave their best smile. It's something that every photographer has to do at one time or another. The groups are never random: There will always be something that brought the group together in the first place. Usually it will be a reward recipient, the presenter, and event sponsor, the celebrity host, and any additional supernumeraries.

Making a picket fence is about lighting and directing your subjects to insure that everybody is recognizable, and making sure that the final photo will reproduce well. Aside from the lighting, I try to spend some time finding either a foreground, or a background, that can help the photo to work. Sometimes it's pretty obvious, other times you have to look for it. And once you've find a background you like, you have to figure out a way to light it to keep your subjects from blending in. Here are some shots that show some different approaches I have made to using either the foreground or the background, or in some cases, a nearby prop, to pull the photo together. Keep in mind that there are time constraints to nearly every shot I make, so I can't always refine the shot to my satisfaction. 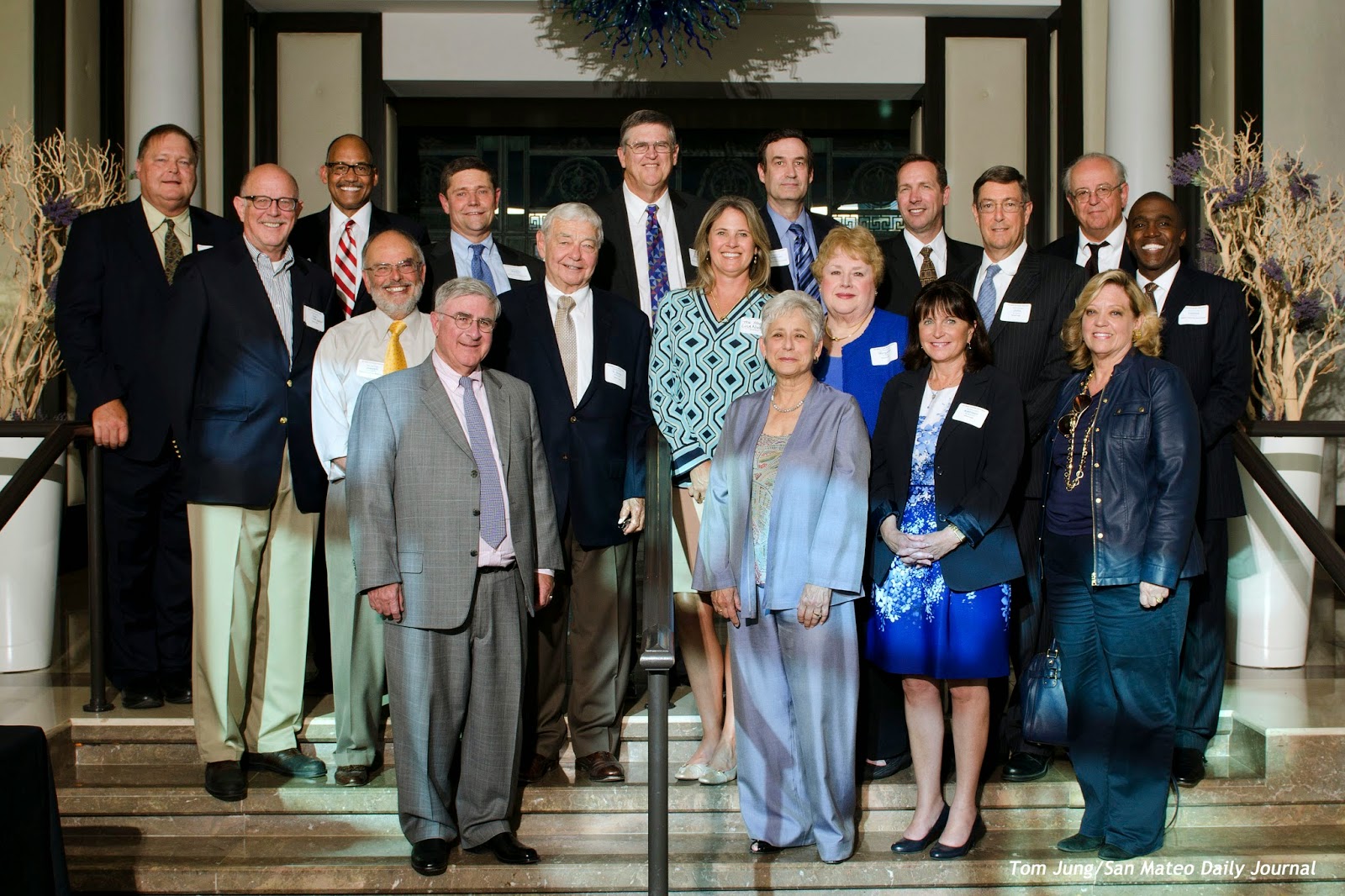 In this shot, the subjects are all judges in San Mateo County, so they all get top billing.

I always try to contact either the publicist or the event planner, and ask that they choose the most important guests at the event. I tell them that I only want the "Bride, Groom, Best Man, and the Maid of Honor", which conveys the idea that I only want top tier subjects. I will often remind them that the more people in the photo, the less recognizable they'll be, and I prefer to work in groups no larger than five. If they insist, I'll ask to shoot my preferred small group, then shoot the "big group" as they requested, and tell them I'll let my editor decide which one to print. Don't forget that in a large group, you'll still have to get the everybody's name, so add that into the time you'll need to make the photo. Publicists may be able to give you the names if you send them a per-publication shot. Just make sure they get it back to you promptly. 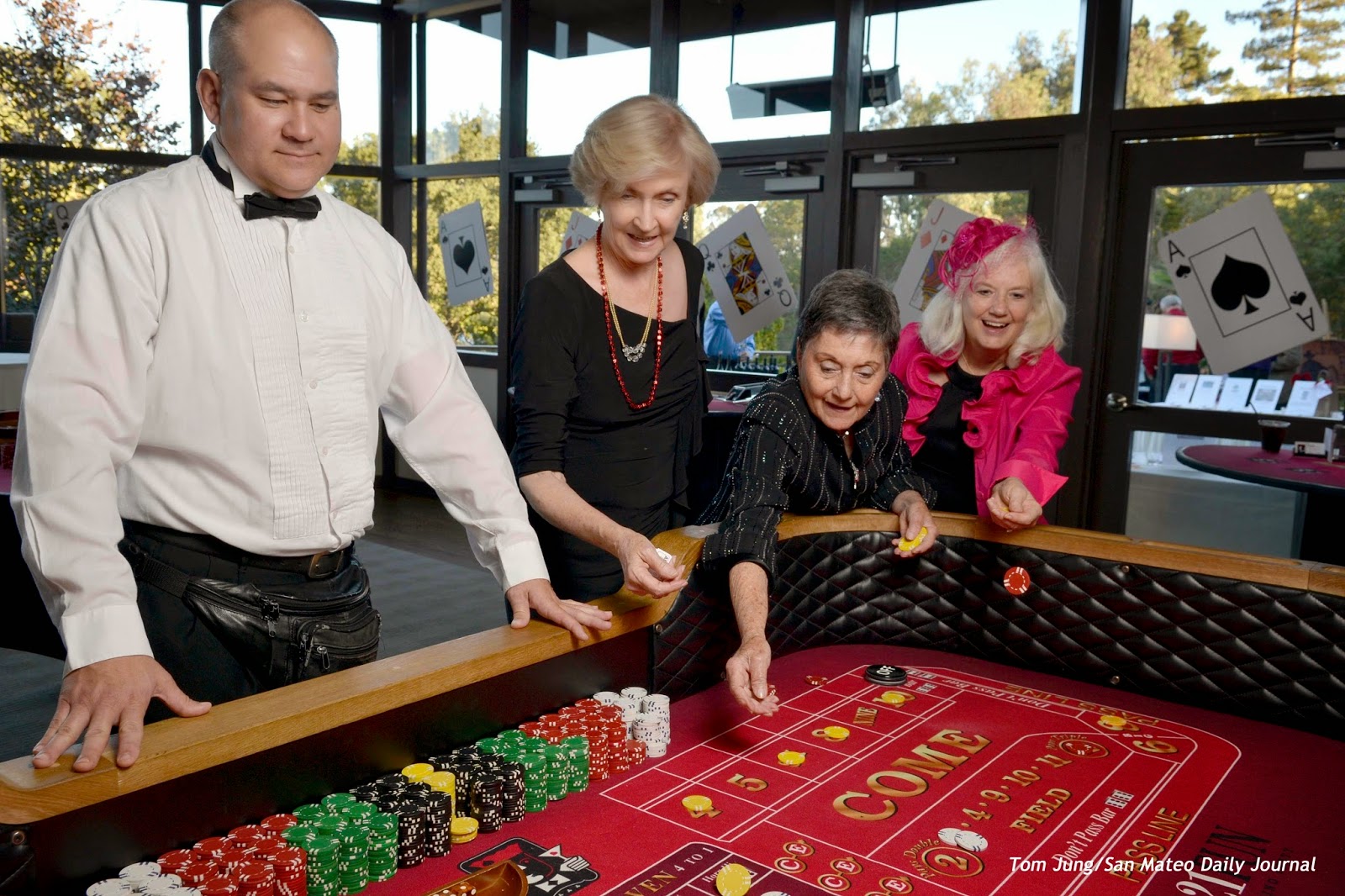 Casino Night: Foreground interest in this photo is the gaming table. Luckily, a single Zumbrella equipped speedlight did all of the heavy lifting. The windows in the background gave me some separation.

The Mulligan would include some sort of light on the playing cards on the windows. However, this might have been more difficult because iTTL requires a line of sight between the on-camera Master and the Remote flashes. I would have had to position the background light behind something, and in doing so, destroy the necessary line of sight connection. Today, I would have used a radio transmitter that allowed iTTL throughput and the independent triggering of a manual, non-iTTL remote. 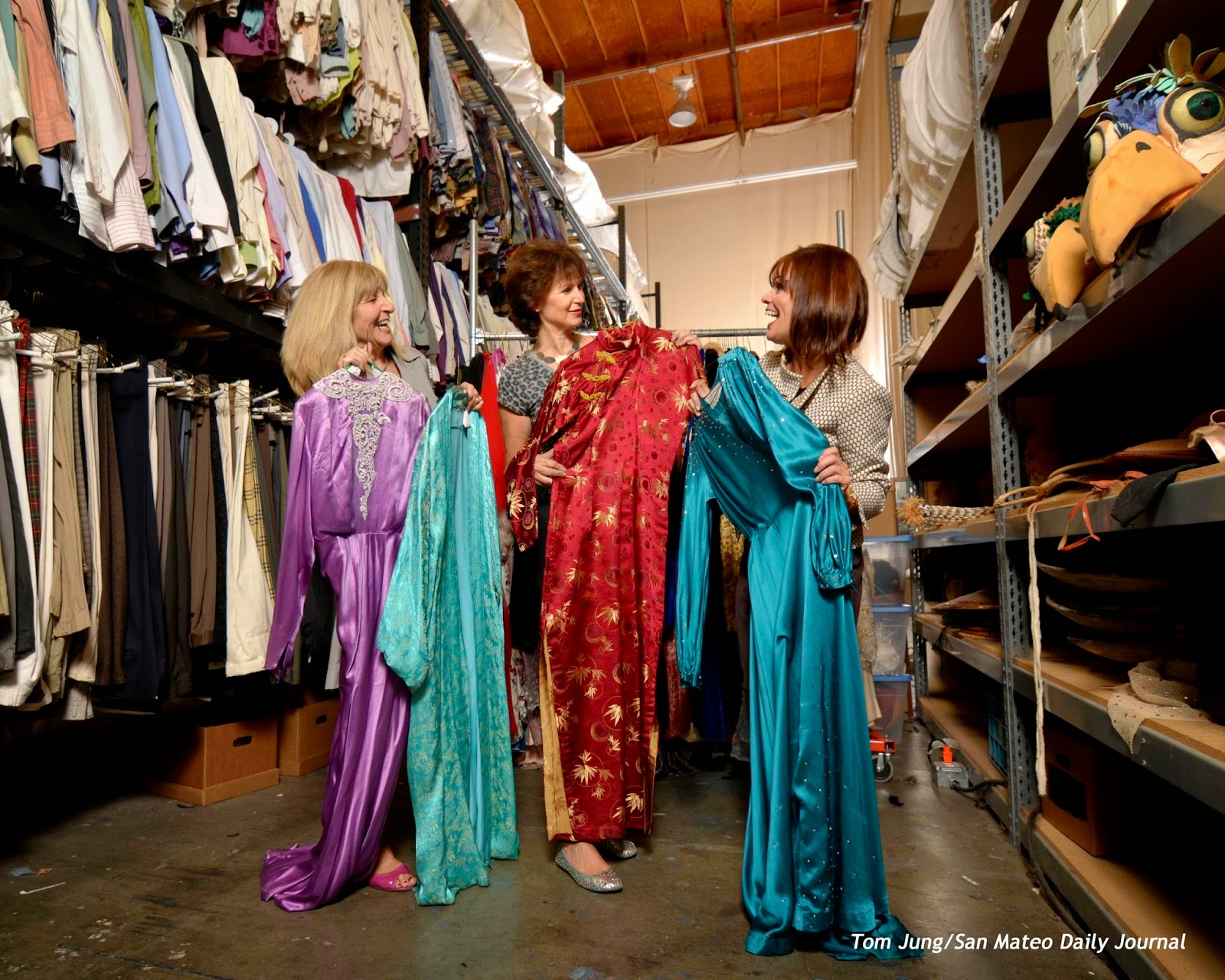 Costume Warehouse: Here, I used three speedlights to provide the background separation. I used one to fill the background (perpendicular to the clothes rack behind the subjects), a second to provide some edge lighting to give the shot some visual interest, and a third aimed directly at the back wall. The key light was provided by a shoot-through umbrella positioned behind me. Notice that these three ladies are the closest visual elements to the camera, so they actually are the foreground.

The Mulligan would have been to put more props in the lower right hand side of the image. The Bird Heads were positioned on the rack a few minutes before the shot was made, an afterthought that adds to the image. 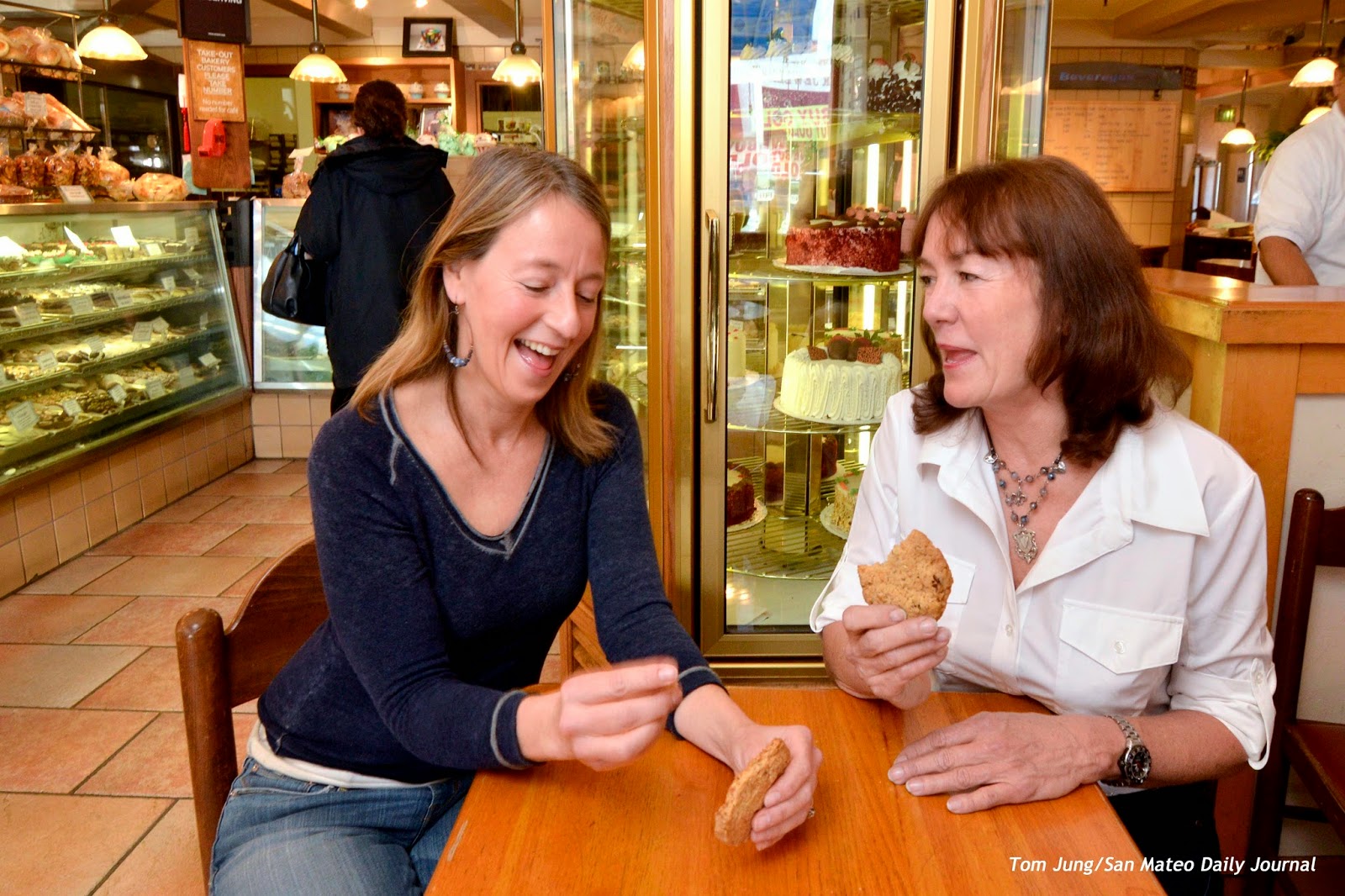 Event Chair and Sponsor: The event chairman and the sponsor (who happens to own the bakery) look like their chatting about the upcoming fundraiser. Here the background ambient shows the inside of the bakery, and my flash provided proper color for my subjects.

To help relax my subjects, I bought each of them their favorite cookie and had them sit down and discuss the upcoming fundraiser. This gave them something to talk about and something to do with their hands. Sooner or later, somebody is going to smile. 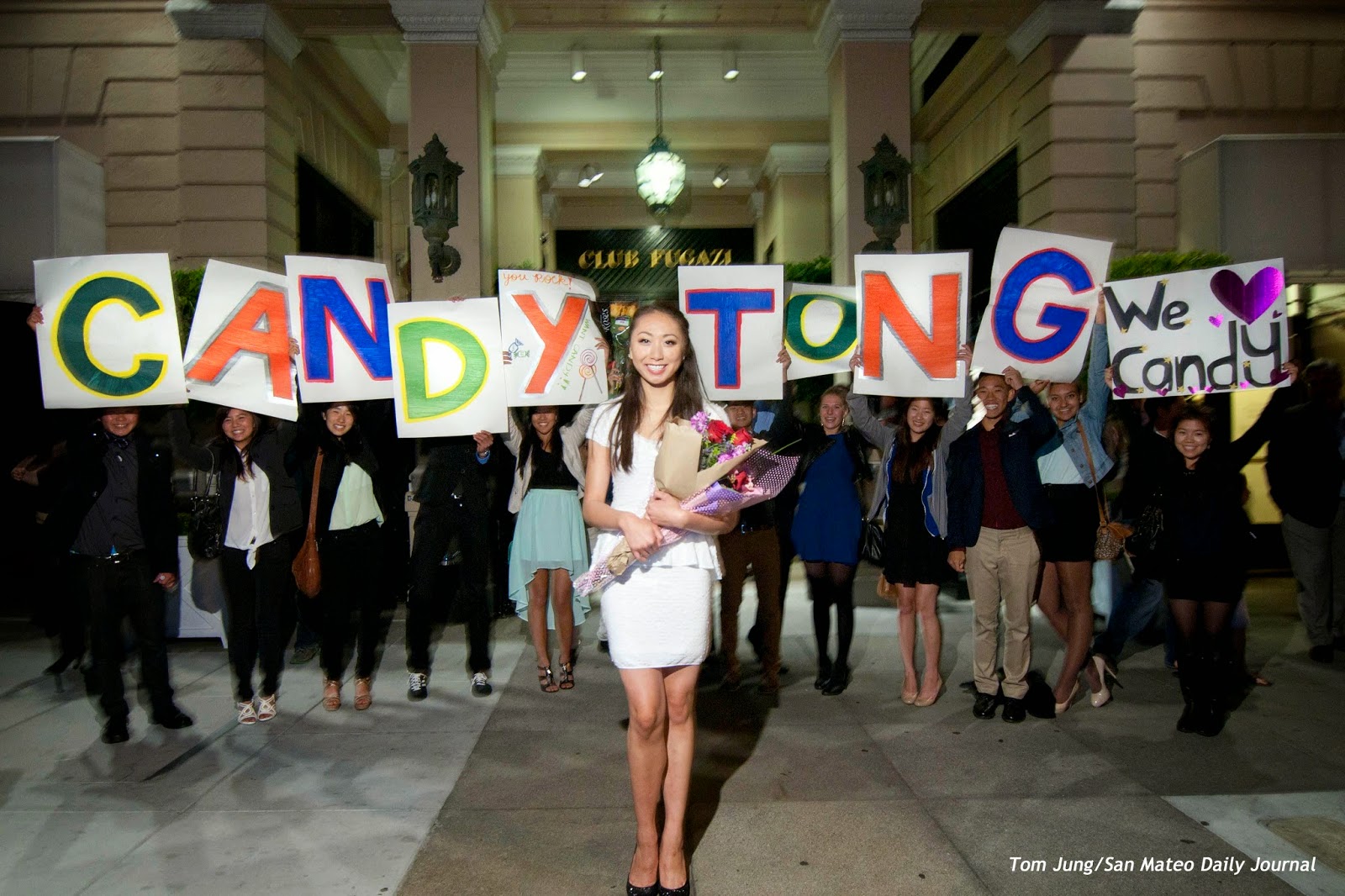 Candy: This young dancer's friends planned on surprising her with the sign they had created. When I saw the sign, I asked the students to pose for a group shot when she emerged from the venue. I made sure they understood that to get the shot II wanted, they would have to quick line up with their backs toward the building immediately after Candy cam out. When they lined up, I noticed the small gap between the "Y" and the "T" which  gave me just enough space for my main subject to stand. Light falls off towards the background, but the reflectivity of the individual letters helped bring the exposure into an acceptable range.

To simplify making the shot, I composed the image with the panels aligned with the background, and had Candy walk forward, or backward, until the composition was achieved. 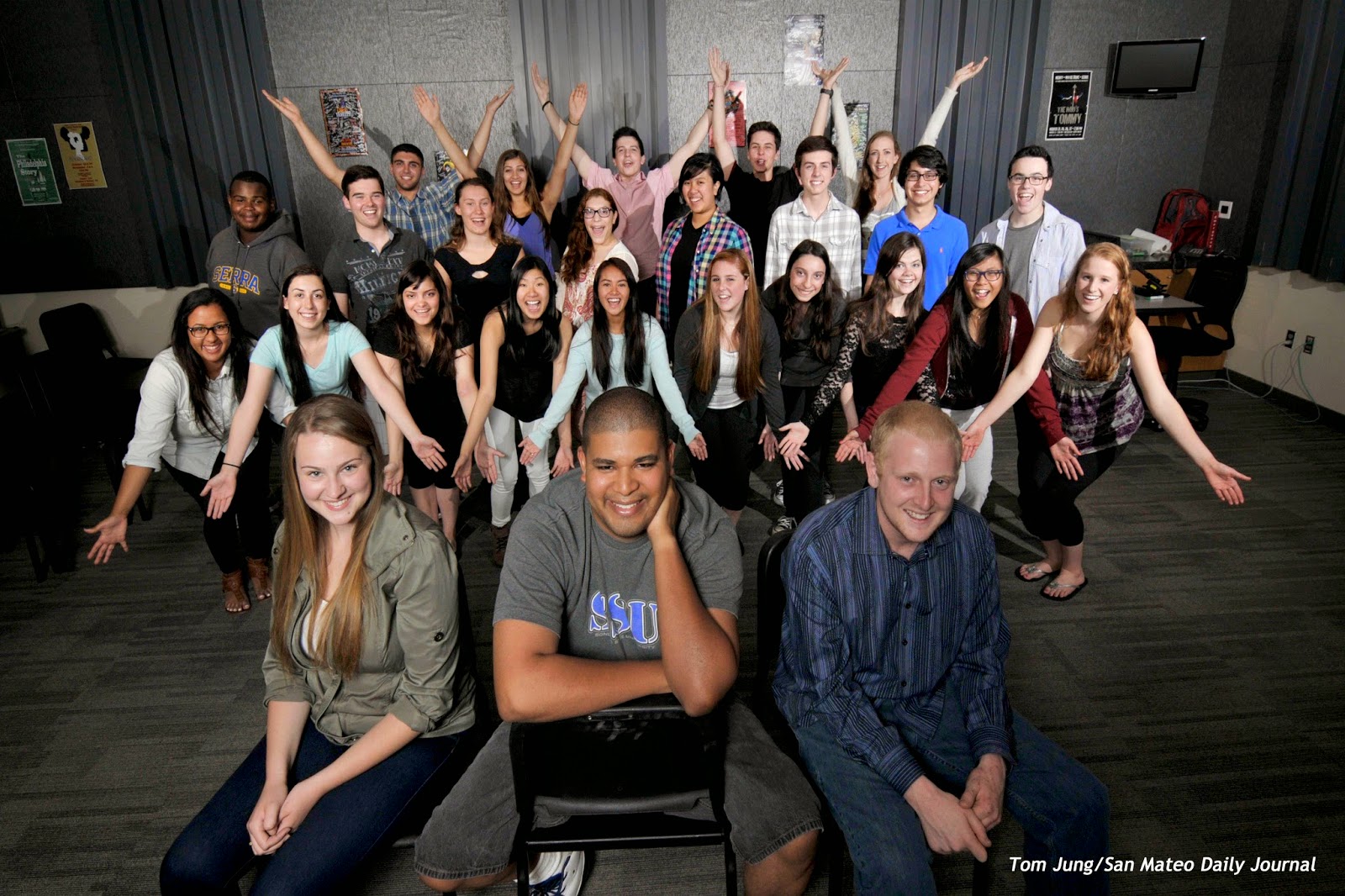 High School Talent: Here was a two-plane lighting situation. I used an umbrella for the three senior performers in the foreground. But with such a large cast, I had to arrange for a second light plane just for them. I did this by placing two speedlights on tall light stands (one on each side of the three seniors) and put on "flags" to prevent light from spilling onto the tops of their heads. The created an (relatively) even cross lighting for the performers in the background. I wish I had time to play with some tinted gels, but I could only get a few minutes to make the shot during a break in the rehearsal. It took about 20 minutes to get the lights in place, and even then I felt hurried.

One important hint: Tell your subjects to stay in place until you get their names. If you don't, they'll break formation before you have a chance to perform this critical task. 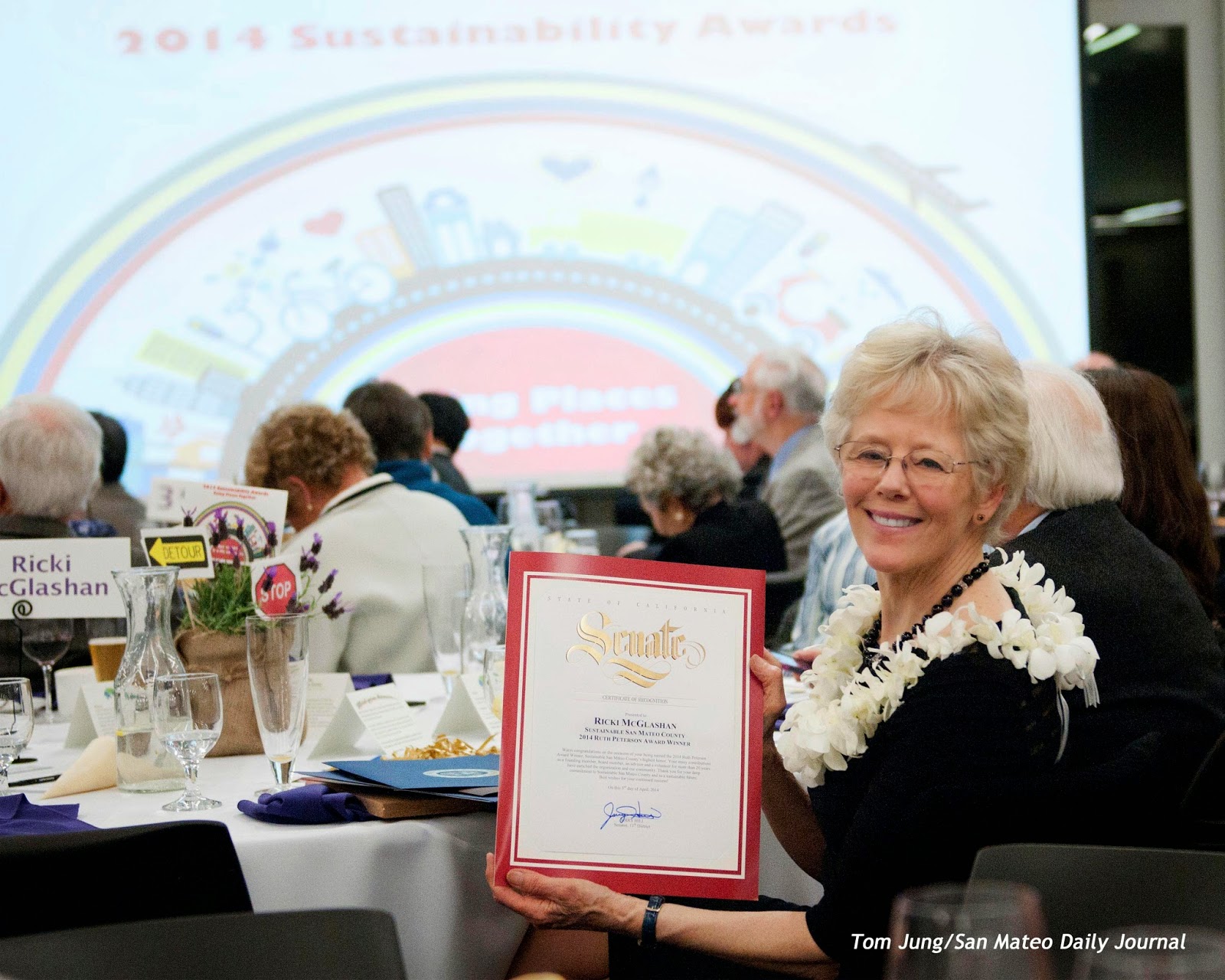 Sustainability Award: This year I changed my approach to Picket Fences. Since I usually get a press release for each event, I'll contact the Publicist, or whoever is serving in that capacity, and arrange to make the photo at the end of the ceremony. Now it is her/his responsibility to round up the talent. Publicists with more experience know how important it is to work with the media because every publish photo or article is a reflection on their skills.

For whatever reason, I arrived "cold" at this event, so the honorees had no idea I was coming. Here, I found my subject immediately after she returned to her seat. I noticed the PowerPoint slide projected on the back wall, and made some preliminary exposures to see if I could use it as a background. It turns out that it would work only only if I made the photo from twenty feet away from my subject. Also, there was a lot of glare from the white walls and the table cloths, and this exposure was going to be the best rendition I could get. I quick preliminary ceiling bounce from an on-camera flash opened up the shadows, so I was ready to go. I went over an introduced myself, and congratulated her on her achievement. I told her I wanted to make a photo, and asked her to look at me and smile. She may have wondered why I took the shot from so far away, but that how it had to be done. 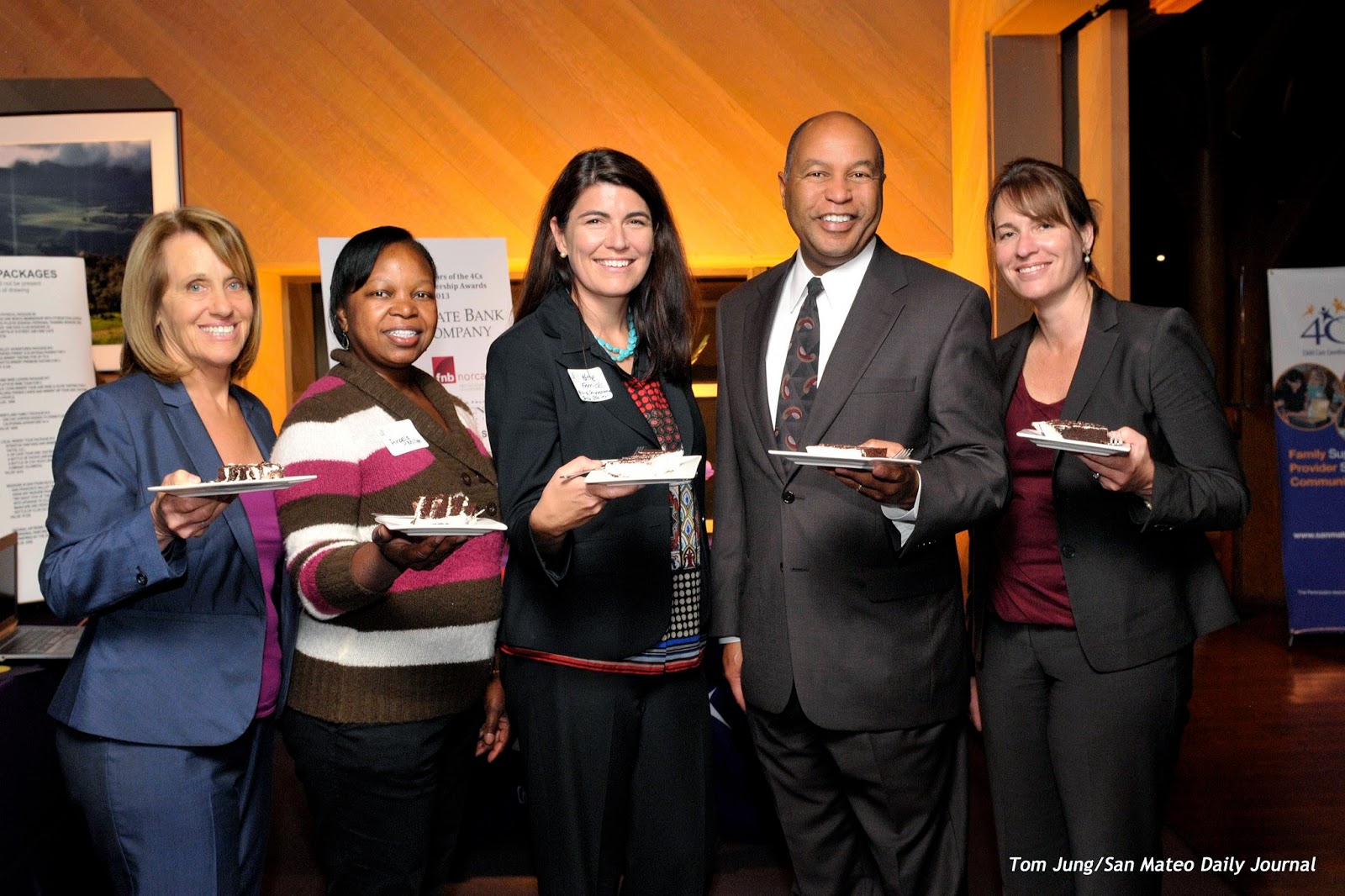 Organizational Anniversary: I was to photograph the five award winners scheduled on a significant anniversary of this organization. I tried to make some podium photos during the actual presentation, but found the event lighting some of  the worst I've ever seen.

I decided to make a picket fence at the end of the event. While I was waiting around, I decided to highlight the background with a CTO gelled second speedlight.When the presentation ended, birthday cake was cut and passed out. I arranged for the award recipients to bring a piece with them and take a "Here's your slice!" pose. This helped the subjects relax, and I was rewarded with some sincere smiles. Unfortunately, I couldn't move the organization's banner into the composition, something I usually try to do.

Don't let yourself get bored with photographing groups. If you make an honest effort to make each picket fence a little better than your last "personal best", you might start to look forward to the assignments.
Posted by Tom Jung Photography at 12:10 PM No comments: