I wrote an earlier post about the Flashpoint Portable 200WS Flash, cheering the compact size and 200 watt second output. I agree that using Watt-Seconds to measure flash output is outdated, but power is power, and efficiency, or inefficiency, is as much the result of reflector design as it is of raw power. Just the same, more is more, and I am definitely pleased with this addition to my flash kit. The cable is most welcome because the flash tube can be held aloft, by hand if necessary, without the inherent weight and bulk of the integral battery pack. I can now carry the battery in a belt pouch, a much more practical way of carrying the unit.

I examined the slide show showing the cable's details, and was pleased to see that a mounting foot had been built it. The slide show also revealed a 1/4 x 20 threaded hole in the base of the foot, my preferred attachment point. 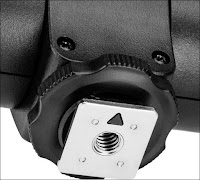 This closeup at the left clearly shows the threaded attachment point. While not apparent from any of these slides, the shoe pivots, adding some of a traditional speedlight's functionality to the Flashpoint. Oh, my mind boggles at the potential!

I'm not sure it the photos make it apparent, but the reduction in size and weight will make it much easier to fit the flash tube within the confined space of a softbox. My earlier post hinted at how the bulky body barely fit inside of a Westcott Halo light modifier, and restricted the flashtube's placement in relation to the foundational umbrella's shaft. 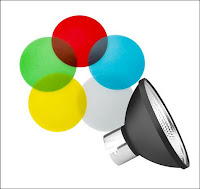 The introduction the extension cable eliminates my greatest gripe with the unit. Now if Adorama will just get around to making some pre-cut Color Correction Gel/Disks that could be attached to the optional parabolic reflector with the provided bezel. The four colors currently available (red, green, blue, and yellow) are so...last century.  Make me some basic CC gel equivalents of the Color Temperature Orange family and I'm a happy camper!

I getting more and more comfortable with the concept of "geezerhood", and in my new role, feel entitled to share my life experiences with all of you whippersnappers, whether you want to hear them or not. Two stories I would like to share concern my experiences with Harvey Milk. He rose to prominence during a particularly troubled political time, but I feel he had an enormous impact on the mainstream perspectives about the gay community.

I was doing a lot of black and white photography in the early seventies, but when it was time to do color, Kodak Ektachrome was my film of choice.  Since I live within walking distance of the Castro, I'd bring my  film to Castro Camera, then located on Castro between Eighteenth and Nineteenth streets. I recall the excitement I felt whenever I opened the yellow slip-top box indicating this was genuine Kodak processing, and then laying my precious transparencies on the shop's light table for closer inspection.

I remember one instance when I had six posters made from some of the many photos I made during my "internship" at a private school south of San Francisco.  They were to be delivered to a local client who would bring them to New York for a display at an education conference. I was assured by Harvey and the printer  that they would be done in time, but due to a hang-up in production, they  were two days late. Harvey complained to the printer on my behalf, and arranged to have them sent via air freight to New York in time for the presentation. The cost to me? Nada.

My best story came during his run for supervisor. When I walked into the shop, he showed me a piece of paper with something written in Chinese, and asked if I could read it. Assuming that Harvey couldn't read it either, I offered to take it to my Grandmother who could, and then have my Mother translate it into English. He chuckled, explained that some Chinese friends had created it, and that it said:


Mr. Milk has something for everybody.

Harvey certainly did, and he proved to my satisfaction that one could be a strong advocate for one group of people without alienating everybody else. The era and the movement could not have had a better champion.
Posted by Tom Jung Photography at 7:57 AM No comments: Links to this post

Which Photo To Choose: Some venues can be 'target rich environments" for far as cool shots are concerned. I tend to overshoot my assignments, bring back more technically suitable images than needed. This means that at some point, I'll need to make some hard decisions on what photos to send, and which to retain. Writing the caption is still an issue, since I'll need to identify everyone in such shots, along with their titles as the pertain to the event itself. Before I go into why this shot was submitted, you'll need to know the back story.

This charity event had two important components: The award to a worthy member of the community, and a famous guest speaker. Since this is a local paper, the community aspect takes precedence over a film star, in most cases. Tonight, the award recipient's personal and professional achievements made a more compelling story, so it's where I concentrated my efforts when it came time to submit the money shot. My submission clearly shows the honoree's name on the PowerPoint slide behind her, and two of her supporters are seen applauding behind her, who were named in the caption along with their professional roles in helping Annett achieve her personal and professional goal. I submitted Photo #1.

Photo #2 was not sent, although it shows the actual award and the President and CEO of the Charity. It came down to giving recognition to a member of the leadership committee, or recognizing those who actually had a hand in helping Annett. Also, the background signage was a bit distracting, which is another reason to not send it.

Truth be known, either photo would have been perfectly acceptable, but my choice was based on a belief that the little recognition my small photograph would provide would go to those who worked hardest to achieve it.

The Context Game: One final note about photo selection. Context helps build the story at the center of the photograph. One exercise that is often used by educators to evaluate a student's ability to communicate involves showing a picture to a subject and asking her/him to describe what they see, and more importantly, what they think is happening. If I presented both photos to a child, I'm confident I'd get a more relevant description from my first choice than I would from my second.

Patrick Dempsey: The guest speaker was Gray's Anatomy star Patrick Dempsey (Photo #3) , who was called up to replace another star who cancelled at the last moment. As is frequently done by this organization, a local media start is chosen to serve as a mediator in discussion about topics appropriate to the setting.

The discussion that followed gave the audience some interesting insights into one television star's navigation of his personal journey through his life in the world entertainment, and his personal understanding of the many clients helped by the organization. His ready smile allowed me to make some pleasant photos, but nothing I would submit for publication. Still, it's good practice in learning to predict when a "magic moment" is about to happen, even if it's just a sincere, engaged smile.

This wide shot (Photo #4) wouldn't make the paper for number of reasons. First, the subjects are too small to be recognizable when published. It might do if the logo "Power of Possibilities" was important, as it might be for the heading on an in-house web posting about the event. It also suffers from the placement of the moderator, who appears larger than Mr. Dempsey due to their proximity to the wide angle lens. Also, Mr. Dempsey's gaze is towards the moderator, making her appear to be the more important personality of the two.


Odd Angles: I'd like to get some points across before I close this post. You need to be as inconspicuous as possible during these presentations. The people sitting at the front tables paid a lot of money to sit close to the action, so I try to keep as low a (physical) profile as possible. By evening's end my knees were killing me because I avoided standing unless it was absolutely necessary, lest I block somebody's view. My position when making Photo #4 was one of the few where I had a clear shot at my subjects, and I was reluctant to move if it meant leaving a good vantage point only to find my next position less than satisfactory.
Posted by Tom Jung Photography at 12:10 PM No comments: Links to this post