Flash In A Tight Space 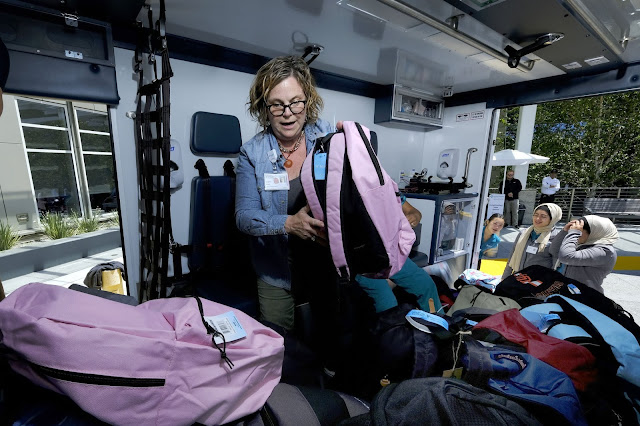 Buried In Backpacks! A local hospital hosted a back-to school give-away of brand new backpacks filled with school supplies for distribution through a local charity. The bags would be delivered to the distribution point in the back of an ambulance.

The shot was relatively easy to make, but it required the cooperation of  the subject and the staff loading the backpacks. I entered through the open door at photo left managed to climb over the backpacks  that were already in the ambulance and situate myself in the "corner"of this tight space. I was using a Fuji T2 and the 10-24mm lens set at its widest setting. The flash was adjusted manually, so it was shoot and correct until I got a setting I was happy with, which was 1/250 at F11. This combination allowed for good outside detail, while  bare flash, fired using a neutered flash cable, provided the interior detail. Since all the exposures were manual, I used a discontinued Adorama Flash described here.  This gave me super-fast recycle time without the bother of a supplementary battery pack and its requisite power cable. 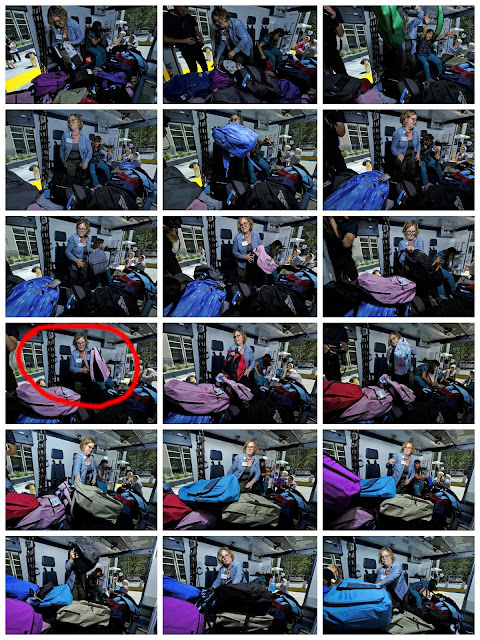 Spontaneous shots like this one means that there are bound to be rejects because, in spite of our best efforts, we never actually see the shot in real time. I've found that working with a mirrorless camera allows me to view the image without taking the camera from my eye. You can see that the tenth shot has been circled because this was the shot I submitted. It was the best compromise in exposure, composition (it was cropped slightly) and expression, and had the advantage of showing the two shoulder straps on the backpack, a visual clue as to what was about to be thrown.The sequence started at 12:42 pm and ended at 12:45, so I managed to get over a dozen photos in a very short time.

When I was pretty sure I had the photo I wanted, I managed to climb out from under this mountain of backpacks with a little help from the volunteers. After I photographed everybody's ID badges, I was ready to call it a day.
Posted by Tom Jung Photography at 12:10 PM No comments: Links to this post