I Stand Corrected - The Built In Bounce Card DOES Work! 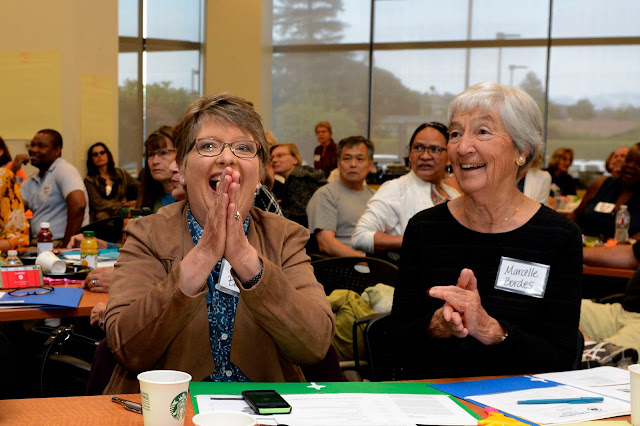 Well, I got it handed to me royally, and was saved by the grace of a small piece of plastic hiding inside the head of my SB-900. The assignment was to get some candid photos of teachers, administrator, and support staff in a combination retreat and pep rally that was to prepare everybody for the upcoming fall semester.

At first, I thought I could get away with available light. While I had some Fuji cameras with me, I didn't have a short telephoto to bring me closer to students working on the other side of a table. I shifted by to a Nikon D600 and my 70-200 2.8 because it gave me the focal length and the vibration reduction that I needed. I still wasn't getting the contrast that I wanted when shooting nearly wide open, and the ambient lighting wasn't giving me much contrast.

This shot (Sample #1) was typical. Lighting in these venues is pretty standard: Artificial light from above, combined with windows, gives a strange mixture of colors. 1/60 of a second was pretty much the norm (I was shooting at aperture priority), and unless my subject and I were perfectly still, I got some blurring caused by subject movement or camera movement, or both. I needed some help, and fast.

Built In Bounce Card (BIBC): My savior was the built-in bounce card that is found in nearly all modern flashes/speedlights. Nikon has had them in their speedlights since the SB-25 (introduced in 1992). This was probably in response to a growing number of photographers who could now use automated exposure systems to properly expose bounce-lit photographs*. Savvy photographers started attaching 3" x 5" note card with rubber bands, sometimes bending them at angles to achieve a bit more light on the subject. I've run into an number of photographers who used the BIBC. I see them being used by other media photographer, usually by shooters who don't rely on speedlights as a primary light source. From my personal observation, those photographers that do have gone to the Gary Fong Light Cloud Dome, or some other variant.

White House Press Photographer Pete Sousa can be seen using one in this screen capture from National Geographic's "The President’s Photographer". Here you can see the BIBC in action if you check 3:23. Note: If you follow the link at beneath the image, you'll be taken to a You Tube version of the documentary that is NOT narrated by Morgan Freeman. Don't know why.

Okay, it was good enough for Pete, it was good enough for me. I had never used the BIBC, and had considered it a fill flash at best. Because of it size, only a tiny fraction of the outbound light would be directed forward, with most of the flash output going straight up to hopefully bound off of a neutrally colored ceiling. It did get the light away from the lens axis, decreasing the chance of red-eyed subjects. But it's still ceiling bounced flash, not the best source of light. Here goes nothing.


I was very pleased with how the BIBC performed, as low-tech as it was. All it really did was make the ceiling bounced light look better by providing show shadow fill. Period. 'But I'm thankful that I could use 1/200 of a second and small apertures for the shots, which nearly eliminated most subject movement while providing a suitable depth of field. 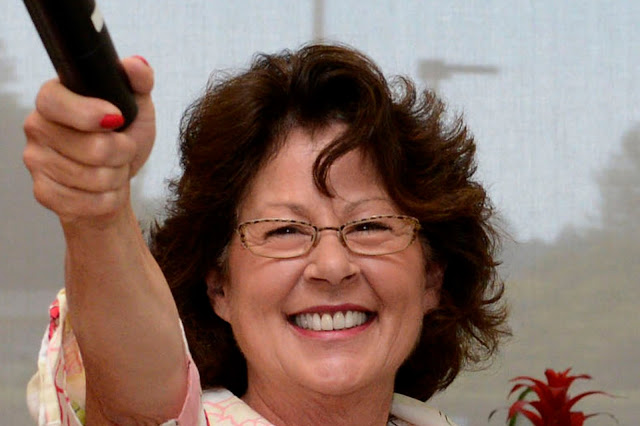 This tight crop of the last image shows that the BIBC pretty much does what it's supposed to do: Provide some fill in the shadows created by the ceiling bounce. The card itself is just large enough to create a visible catchlight and provides a decent amount of fill.

I won't pat myself on the back just yet. Those windows in the background are tinted, which allowed a fairly close balance between the outside/background and the inside flash-lit foreground. A full-blast outdoor background would have detracted from the overall feeling of the photos, and I'm thankful for that tinting.

*Vivitar was not the first automatic flash, but may have been the first to have a modular sensor that was stationary, and a flash head could be elevated to provide forward facing bounce flash. And the 283 was affordable for most hobbyists. It may well have allowed photographers to embrace bounce flash because it could automatically determine the amount of light necessary for a proper exposure, something that was normally done with some simple measurements, some educated guesswork, and a lot of luck.
Posted by Tom Jung Photography at 12:10 PM No comments: Links to this post