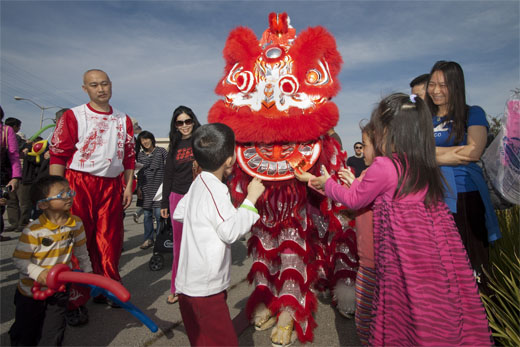 The big story was the Lunar New Year Celebration in Millbrae. There were going to be a traditional Lion Dance at 2:00 pm, so I naturally arrived at 1:00 pm and started to look the place over. Just last week I had a similar assignment in Foster City, but it was an indoor event, so lighting was a different challenge. When shooting outdoors, there would still be problems. Just different ones.

Because I didn’t know how much walking would be required, I decided to travel light. I was carrying two D70 bodies and 3 lenses: A 10-24 and a 24-70 Tamron, and 70-300 Nikkor. But even with one additional SB-800 speedlight, it was lighter than my normal kit. I did forget to bring my Hoodman Loupe, so I was constantly squinting to see the details in a tiny preview image. When I’m carrying a D70, I’m sacrificing a usable LCD panel and lots of pixels for the body's high flash sync speed (1/500th of a second).

When I was starting making photographs in the 1970's, I gave little thought to the four basic characteristics of Light (Quality, Color, Quantity, and Direction). Back then, it was only about quantity. I had a Gossen Luna-Pro light meter and used it as an incident meter for better control. True, when I looked at the little light integration dome on the old Gossen I was very aware of the effects on the direction of light, and assumed that the meter would give me a good average reading.

Now that I use digital, I rely totally on the TTL light metering system to divine proper exposure. While it has the some drawbacks under extreme lighting conditions, the ability to get an instant preview of the image, along with the histogram and highlight display (the "blinkies" as David Ziser calls them) allows me to determine exposure 'by ear", using a trial and error approach, tempered with past experience.

I was here for the Lion Dance, so I practiced on the warm-up acts. The raised stage had white, translucent walls on three sides with the open side facing the audience. A "roof" was made of a similar material. The sunlight was coming from camera left and from behind, leave the performers on the stage in a nearly shadowless environment. These minimal shadows made it harder to sense the three-dimensionality of the subjects. 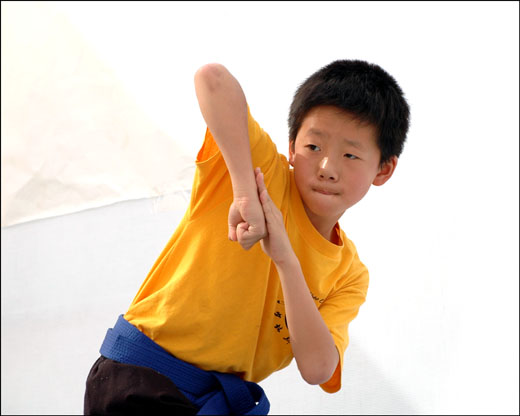 This photo shows the nearly shadowless stage environment. Notice the subtle edge lighting provided by the left and right walls. The bright highlight on the nose is from direct sunlighting coming through a passageway near the back of the stage. 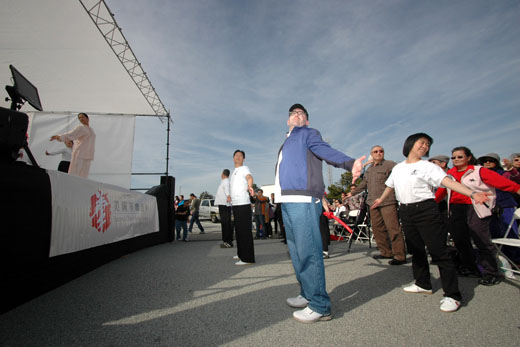 During this Tai Chi demonstration, I stepped to the side of the stage to see if I could wrestle the existing sunlight with a camera mounted speedlight. I tilted the head up slightly to minimize overexposure of the foreground. This reasonably exposed image doesn't look "flashed", and there's plenty of shadow detail in the faces. But the image isn't particularly exciting, the pose not very suggestive, and it doesn't have any Lions. Three big minuses. Anyway, the sky turned out nicely.

Desperation Sets In. In spite of the poor lighting conditions, I did have to bring back a shot. I took a series of shots of the Lion Dance on stage. Here's one of them. 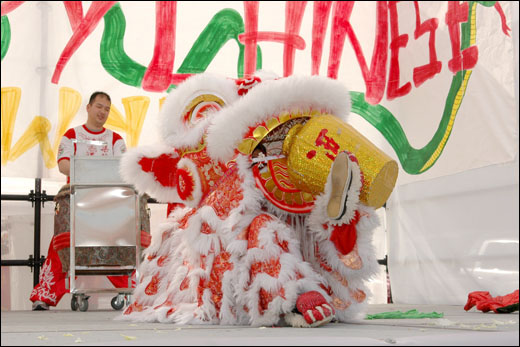 There isn't anything technically wrong with this image, and I would submit it if nothing better could be made. What bothers me most is the flatness of the lighting and the absense of any specular highlights and the resulting lack of saturation. 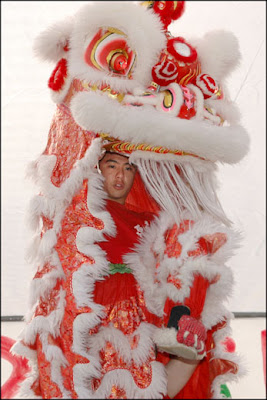 I normally submit only photos with a landscape orientation. In an effort to get something different, I tried this shot, hoping to get a good combination between the Lion and the young many inside. But the lack of contrast and the overall desaturation of the colors worked against the image.

Now I had two stage shots that I could submit if I couldn't find anything else. I wasn't particularly pleased with either one, but at least I wouldn't be going home empty handed.

The flash served as a fill light, just powerful enough to give some detail in areas underneath the Lion's chin. The flat, on-axis fill light is not considered a problem in most cases, but with so little contrast in the highlights and middle tones, it looks a little out of place. Adding to the mess was the overexposed background. When setting the exposure, I relied on the blinking Highlight Warning feature when I chimped the images. It was important that the background not be overexposed beyond recovery. However, the background would surely "burn out" if or when this image is published.

I got a lucky break when the Lion dancers finished their performance and left the stage to accept red good luck envelopes from  the audience. I waded into the crowd with the 10-24 and the 24-70-mounted on their own bodies, swapping my single speedlight when needed (I should have brought a second SB-800, but forgot). Again, the flash head was tipped up slightly to reduce any foreground overexposure. A two normal shots and the wide shot were much closer to what I had in mind. All three were submitted. 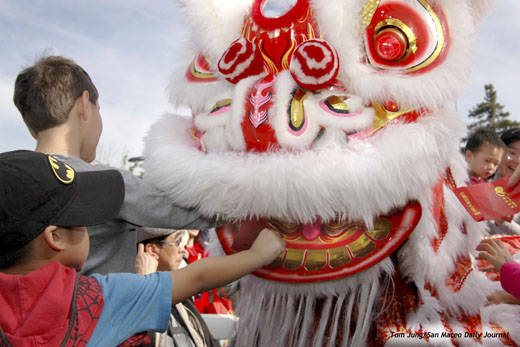 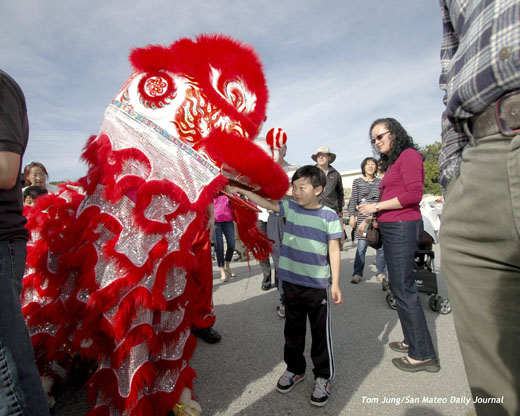 The wide angle lens and on-camera flash seem well suited for this kind of work. I am mindful that on-camera flash is not a good primary light source, but works well as a fill. For this close quarters work, I set my camera to Shutter Priority, the shutter speed to the maximum flash synchronization speed (1/500th of a second), the Exposure Compensation factor to – 1/3 of a stop, and depending to the ambient light levels, dialed in my speedlight exposre compensation to -1/3 of a stop, or more. This lessens burned out highlights on foreheads and noses. 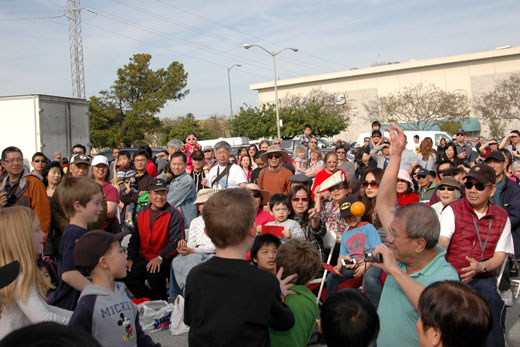 As proof that the system works, I grabbed this shot of the audience trying to catch an orange tossed by one of the Lion Dancers. The people in the foreground are actually in the shadow of the stage structure, and the flash added a little more light to even out the overall exposure. 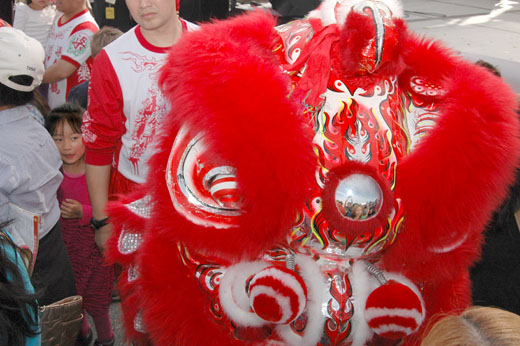 I guess I’m happiest when I’m working the crowd. There is a lot of “bob and weave” involved in moving in close to get a shot. And if you have to do something really silly, most people won’t notice. Closer examination of this photo will show a photographer using the “Hail Mary” technique. You can see the shot (above), and the shooter (below). 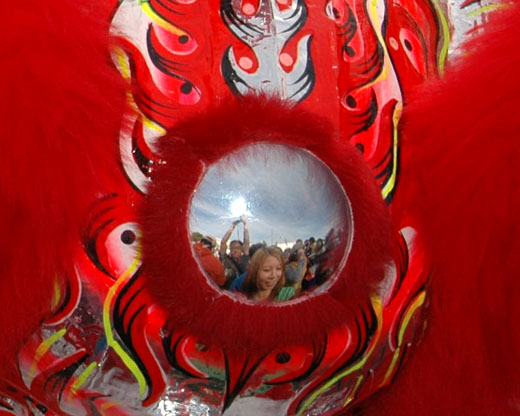