Happy Seventieth! Boy, time flies when you're having fun. A dear friend was celebrating  her 70th Birthday with a party held in her condo's recreation room. For as long as I've  known her, she has kept a supply of red noses to wear whenever the situation called for a bit of levity. After all, who can be grumpy when confronted with somebody with a red nose? My plan was to create a composite image of all of her guests, each wearing a red nose. The post processing would be pretty straight forward, since I've done this sort of thing before. The goal was to set up a shooting area which would give me consistent results with a minimum amount of disruption to the party and the guests in attendance.

To standardize the images, I brought a collapsible textured background which I could tape to any handy wall. Since this was an on-going project, I needed to leave my setup in place so I could shoot candid photos when I wasn't playing portrait artist. I found a small alcove between the two restrooms, and by positioning the background on the far wall, people could get in and out of the facilities without too much trouble. I had some grand ideas about using a shoot-through umbrella, but the light stand was out of the question in these tight quarters. I settled on a camera-mounted  Gary Fong Light Sphere, and while not the most artistic light source, it was certainly good enough for the photos. The lens was a 56mm 1.2 Fujifilm lens mounted on an X-T2 body. The flash was an Adorama Li-on Fuji-dedicated flash that allowed for TTL flash exposure. As an on-camera flash the unit worked well enough, and while heavy, was definitely more convenient to use than my Fujifilm EF-X500. 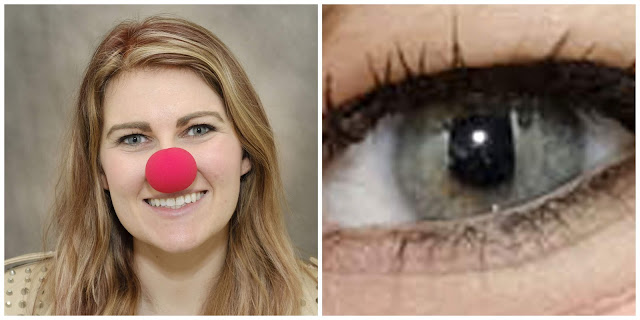 Wall Fill: One happy outcome from my alcove selection was the natural fill provided by the two walls on the left and right. In this super enlargement, you can see the unnaturally straight borders on my subject's iris. You can see that there was plenty of detail in the shadows. Note too that the shadow edges aren't super-soft, as one would expect from a Light Sphere.

Here's the Birthday Girl herself, just as the party was starting to wind down. As the guests started to leave, I couldn't help but notice that everybody was smiling, and thankful for their lives made fuller by living, loving, and laughing with such a wonderful friend. 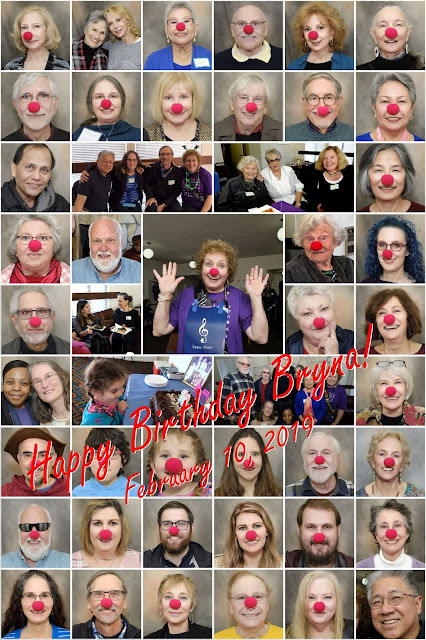 February 25, 2019 Update: Here's the finished product. If you ever try to create a collage like this, be sure to save an unflattened PSD version so you can make any last minute adjustments should new photos become available, or somebody REALLY doesn't want to look like W.C. Fields.