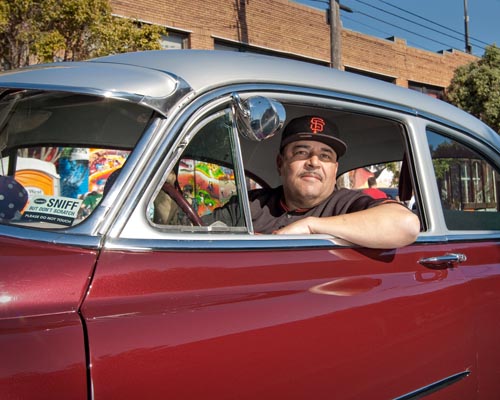 Sweet Ride
I loved this '52 Chevy. The color was described by owner Alex Padilla as "Toreador Metallic Red". I thought it looked like the color of a ripe bing cherry, and every bit as sweet and inviting.
There are several problems that were addressed in this photo. First, the morning sun combined with a Giants baseball cap cast a deep shadow over Alex's face. I had already decided that I would use a flash to bring back the detail. Secondly, there was the issue of overall exposure of the scene. I settled on 1/500 @ F8, ISO 200, Cloudy White Balance. The exposure managed to maintain the saturation of the car and kept the skin tones bright,  but acceptable. Also, the blue sky was not blown out, an important issue had clouds been part of the composition.
Now for the flash. Since the light would becoming from camera right (I didn't want a shadow of the outside mirror to affect the photo), I rotated the head of an SB-800 180 degrees so the sensor would face the camera. When the flash head faces forward, the sensor points towards the right, the appropriate orientation for a right handed photographer holding the flash in his/her left hand. Since this particular Nikon D70s has a non-functioning flash, I triggered the remote SB-800 with an SU-800 unit mounted in the hotshoe. I like to use the lighter SU-800 when I don't want or need an on-camera flash fill. The flash was mounted on the end of my monopod in an umbrella clamp with a Zumbrella firmly mounted in position.


My normal setting for the off-camera flash is + two-thirds of a stop, and that's were I left it. I took the shot with the monopod positioned across my chest so the light would be coming from camera right at a distance of about four feet. When I "chimped" the LCD, I saw that the the sun-lit skin tones were not blown out, and that the line between shadow and sun indicated that the flash had supplemented, but not overpowered, the existing sunlight. I was pleasantly surprised, and since the exposure looked good, I shot two more shots and called it good. One happy side effect of using an umbrella close-up is the large catchlights in Alex's eyes.


If I had more serious intentions for the photo, I would/should have set the flash to manual and adjusted the umbrella forward or backward until I achieved a satisfactory exposure on Alex. Without a light stand or an assistant, I just had to make do.
Personal Critique: Click here to see the published image. I'm well pleased with the photo considering how quickly it was made. However, I should have paid more attention to the background as seen through the windows of the car. If you look closely, you can easily spot the orange door of the Porta-Potty. Subsequent shots, taken from a different vantage point, minimized this unfortunate distraction. Unfortunately, the earlier version was selected. I hope the sticker "Sniff But Don't Scratch" catches the viewer's attention.
Nikon Creative Lighting System
If all this stuff is Klingon to you, check out the link to Nikon School Presents A Hands-on Guide to Creative Lighting available at Amazon.com. At the listed price, it's a bargain. Bob Krist explains how the system components work separately and together, and Joe McNally shows the system in action while on assignment. A great video.
Posted by Tom Jung Photography at 12:01 PM