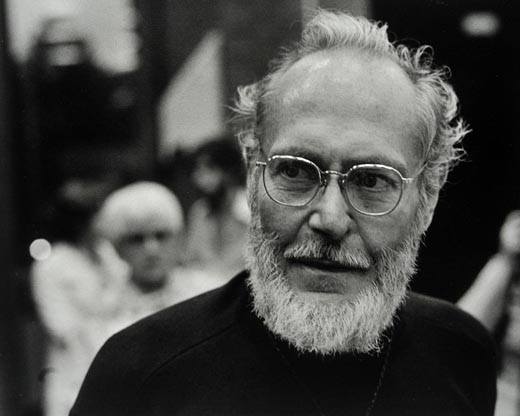 The photographs on this posting were made of, or by, W. Eugene Smith, (1918 - 1978) historically one of the most significant photographers of the twentieth century. He was a photographer for Life Magazine during World War II, and his images will forever remind us of the sacrifices made by thousands of Americans in the armed forces. Beyond their historical significance, I am using these images to illustrate some of the foundations of composition, and the qualities that contribute to a good photograph.

The Rule Of Thirds: This is the best known rule of composition. Start by drawing two imaginary vertical lines, spaced at the 1/3 and 2/3 mark, on the photograph. Do the same for the horizontals. Check the sample. 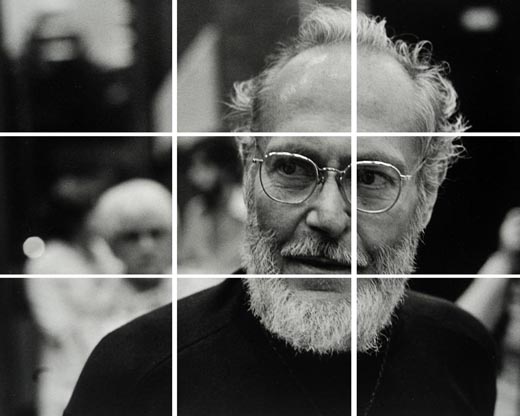 Important horizontals and verticals should be on either of their respective scribed lines. Important points of interest should appear where the vertical and horizontal lines intersect. In this photo, his left eye and mouth happen to fall near the intersection of two horizontal lines and one vertical line.


The subject should face to the viewers left. Since western viewers automatically scan a page from left to right, they will be immediately confronted by the subject's gaze, which faces to the left.


The eye closest to the camera is the most important aspect of a portrait. As I mentioned earlier, Smith's left eye is closer to the camera than his right, and it also happens to fall on the intersection of a horizontal and vertical line. This eye must be in sharp focus.


There should be significant background interest. While classic portraiture might dictate a "content neutral" background, a journalistic portrait should provide the viewer with some insight into the subject. While the significance of the figure in the background is not apparent in this image, it was undoubtedly explained in the caption. 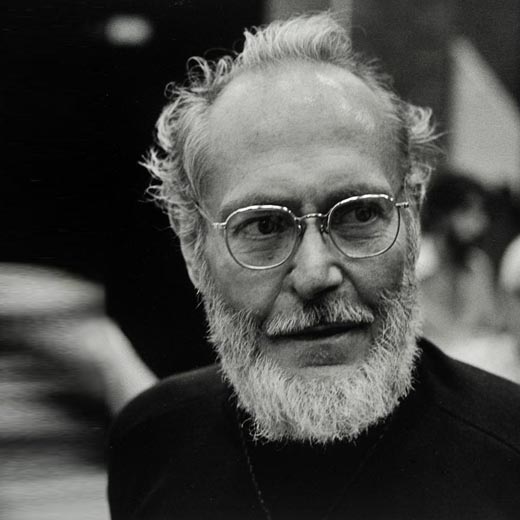 For the sake of comparison, I rotated the original Smith portrait so that it faces the the viewer's right and used Elements to extended the background which force him to the right hand side of the canvas space. This revised image has Smith's left eye on the 1/3 line, but his right eye, the one closer to the camera, is almost centered. It is still a compelling portrait, but I believe the viewer's eyes tends to "slip" off the edge, in part because the viewer tends to follow the subject's gaze. If you compare this image with the one at the top of the page, I  think you'll agree that the first is far more compelling. 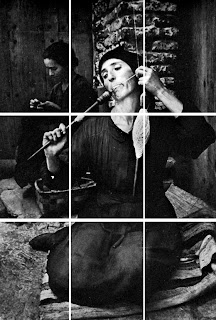 This photograph was part of a Life Magazine photo essay entitled "Spanish Village". When the lines are drawn, you can see how the spindle becomes an important visual feature since it falls exactly on one of the compositional guidelines and also covers one of the intersections. The contrast of the white thread against the dark grey tones of the woman's dress adds to the intensity of the image.


The image also points out another rule that is not universal, but important to remember just the same: The least significant portion of the image is the central region. Certainly, the portrait of Smith at the top of the page is filled with detail at its center. But that was inevitable due to the level of intimacy one infers from the image. His left eye is in the right place, however.


Notice that there is a second woman in the shadows. She adds depth to the photograph, a visually interesting region for the eye to explore. It also adds depth to the image allowing the viewer to experience a three dimensional encounter in a typical European village. 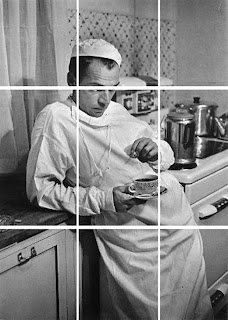 This image from the "Country Doctor" essay shows how Smith uses the Rule of Thirds to arrange the composition. This symmetry of placement does not imply any motion, just the stillness of a doctor, tired from performing some emergency surgery.

The subject should face the center of the photograph. This is true for all three of these samples. In the case of the portrait at the top of this post, Smith's facing to the viewer's left implies a willingness to engage the viewer, which indeed it does to a left-to-right scan of  the image. This would obviously not be the case when the subject is looking directly at the camera, as it would be in a more formal "portrait".


In a portrait, the subject doesn't always make contact with the viewer. Depending on the mood you wish to set, you may need to decide whether to photograph your subjects looking at you, or not. As you can see in all of these photos, the subject is NOT looking at the camera, giving them a more "candid" appearance, a more natural portrait of the subject interacting with his or her environment. 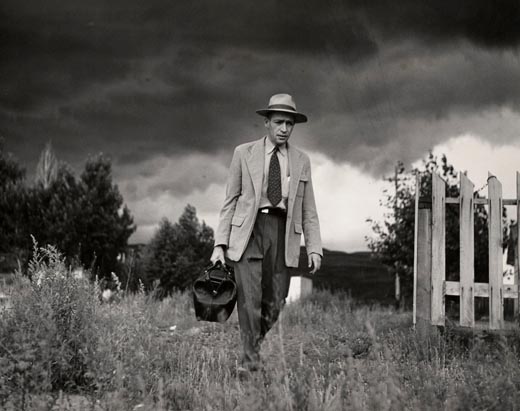 This final image was also from the County Doctor series. In many respects,it seems like Smith ignored the Rule of Thirds. The main subject is near the exact center of the composition. However, when we look at the lines, we may see some insights into Smith's intent. 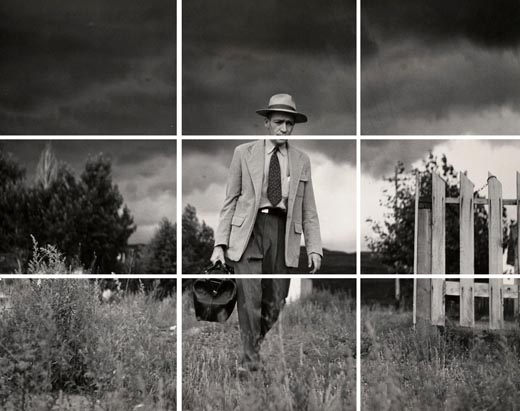 Re-examining the image shows that the picket fence on right is very close the the vertical 1/3 guideline. Also, the darker trees on the left come very close to the left vertical guideline. The the more important feature is the placement of the horizon and the cloud line. Both of these follow the two horizontal guidelines. And while his head is situated in the middle third of the top row, his head and hat contrast well against the darkened sky. Also, the doctor, while centered in the frame, is inclined slightly to the right, making it clear that he's in motion, but not running. He appears to be tired but determined, which is what I am sure Smith had in mind when he made the photo.


I am not advocating becoming a slave to the Rule of Thirds. Many memorable photographs break one, or all of these rules. But if you examine the photographs that have stood the test of time, you'll see that these rules are still a good place to start.

Addendum: In reviewing the blog, there is a bit of advice that I got from reading a column written by Bob Schwalberg when he wrote for Popular Photography, circa 1970. His paraphrased advice was simple: "A photographer is best judged not by the images he keeps, but by the images he throws away". While we take this as gospel in the digital age, there is a more important underlying message. When you set the bar high, you'll discard more, but the ones that make the cut will reflect a higher level of critical evaluation. Since we don't have access to the images that Smith "threw away", we have no idea how many images he took before selecting images for publication. And whether you worked with an enlarger or Photoshop, you can refine your final vision even further. Critical evaluation of your work will only make your photography better. 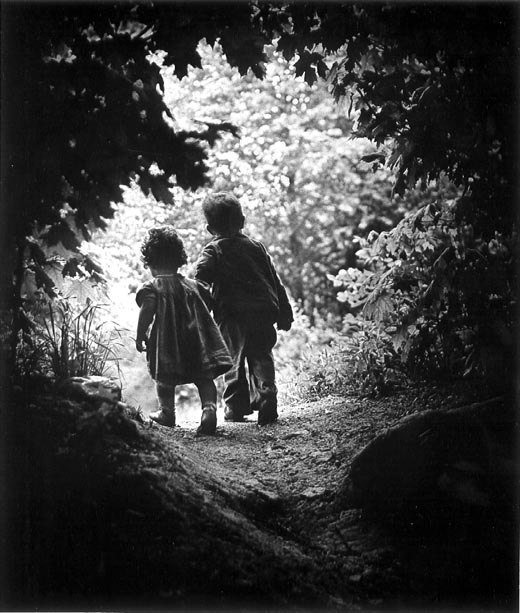 This last photo, A Walk To Paradise Garden, was made in 1946. A copy hangs in my office, a constant inspiration since I first saw it during a photography class in the early 1970's. In an interview, Smith said he wanted to make a photograph that would reaffirm our beliefs that good will prevail in a world so ravaged by the war. And that the world might once again be a place of wonder, where children would find the world green with promise in the years to come.
Posted by Tom Jung Photography at 12:10 PM