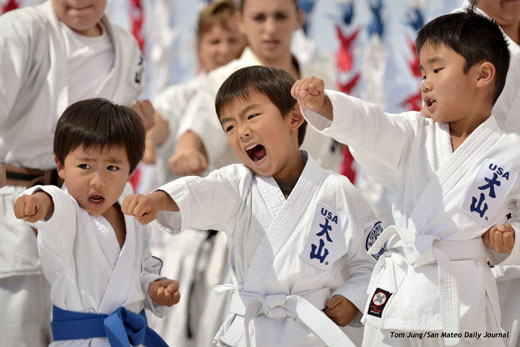 I dropped by the Japanese Culture Festival in Millbrae on Sunday with the intent of making a single photograph for possible publication in the Journal. As is my habit, I thought about what sort of photograph I might make if I were assigned to the event. No such assignment came, officially, so I decided to "free lance" and see if I could find something.

During the presentation, this group of young Karate students was showing their combat skills from an elevated stage. Luckily for me, the stage was covered with a translucent screen that softened the light and filled the shadows. If you look carefully, you can see that the shadow edges are still quite sharp, but there is plenty of detail in the shadows. The photo would reproduce well.

After the presentation, I went back stage and asked for the "See Foo", a term of respect for the Grand Master. When I introduced myself, I asked for his help in identifying these three young men. He could give me the full names of only one of the three, but could give me the name of the young woman, shown below.

The question was this: Should I submit the stronger photo of the unnamed boys, or the lesser one with a named subject? 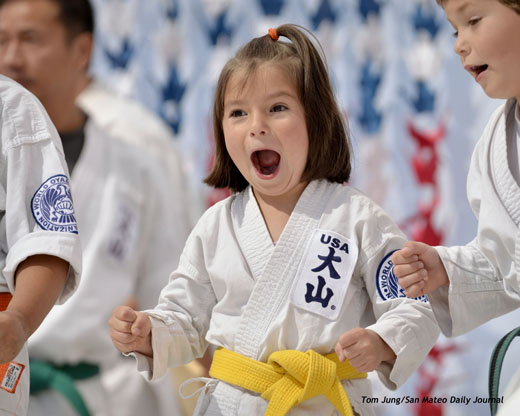 I went with this one, since I was able to get her full name. I could have easily captioned the first photo "...These three students of World Oyama Karate...", but opted not to. I checked with my editor, and asked how she would have handled it. Her response was to submit the shot with the named subjects. Her reasoning was that in a local paper, the recognition of someone from the community would be more appealing than a shot that couldn't make a local connection. This would not be an issue if the photo ran in Minnesota, where there was no local connection to be made.

Breaking Boards: You can't be everywhere at once. Here is a photo of a student preparing to break a board. Too bad that the angle was so bad. Without his face, there really wasn't really complete. Without her face, the photo was missing too much to make it a contender. The shot might have gone, but I would not have been as effective as it could have been if his face was showing. 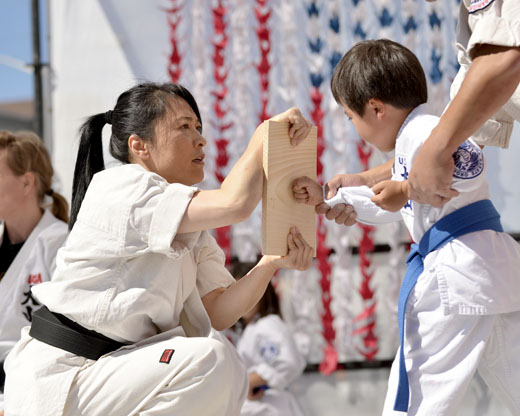 Sometimes the images you get are controlled by where you happen to stand. While the position I chose provided lots of very attractive light for my subjects, I was in the wrong place to photograph the Ice Block breaking that occurred minutes later at the other side of the stage. But I did bring back a fun photo from where I stood.

Like I said, you just can't be everywhere at once.