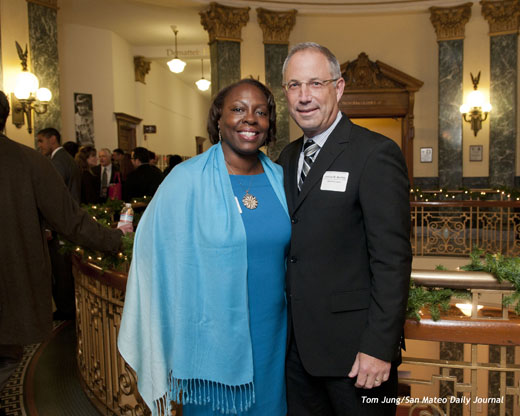 In an earlier post, I spoke of the advantages of bouncing a flash from a wall behind the photographer. The technique works as long as you are working in an environment where the bounce surfaces are neutral in color. Stuck in a green room? Try something else. But the walls of the historic courthouse in Redwood City were a warm beige in color, which worked in my favor. Even then, I would color correct the image before submitting the image for publication.

I wanted to include the rotunda as the background. To do this, I made this quick test shot in aperture priority. I purposely didn't change my Flashwhite balance preset, hoping for a warmer rendering of the background. The shot was made at ISO 800, with the exposure set manually for 1/60th of a second at F 4.0. 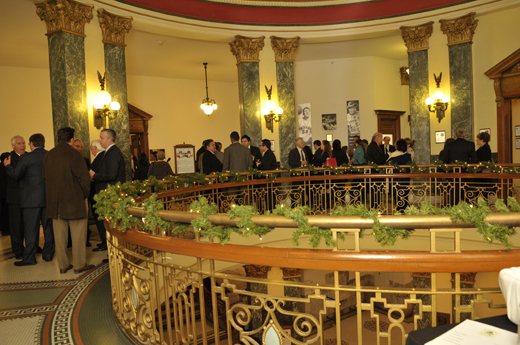 I was unable to take the shot "head on" because I needed to get a large bounce surface behind me. The decorative hardwood porticos (you can barely see one at the photo's right edge) would not have reflected enough light, so I had to stand in front of the most reflective wall I could, resulting in this odd angle.

The opening shot was made at the request of the subjects. Always happy to oblige, I used it as an exposure test. After the first shot, I knew that the exposure and lighting would be acceptable. Now I had to find the two subjects I was sent to photograph.

Having pre-selected my background helped to put my subjects at ease, since it would appear that I had a specific plan for the shot and I wouldn't be taking up too much of their time. But I should have been more careful when using my wide angle lens. The 11-17 Tokina could take in a lot of scenery, including the tiny wall ornament on the other side of the rotunda seen peeking out from behind Judge Freeman's head. Ouch! 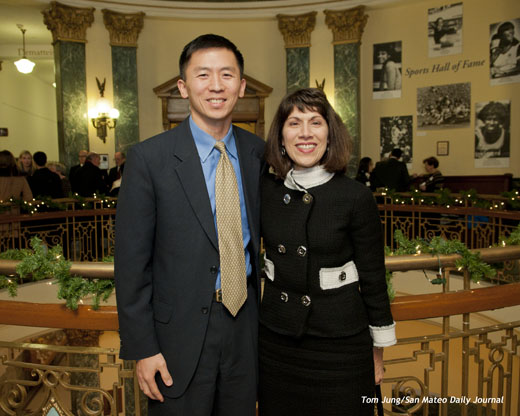 Ethically speaking, I could not alter the content of any photo that I would submit for publication. Cloning was therefore out of the question. So the shot ran, complete with rabbit ears.