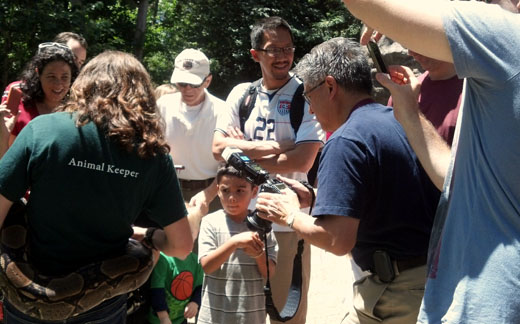 This is a cellphone photo made by a friend while I photographed Reptile Day at CuriOdyssey, a hands-on natural history museum in San Mateo. I asked for this particular assignment because I like reptiles and it was near my office. As a kid, I spent a lot of time with snakes and lizards, so I always enjoy any assignment that involves "creepy crawlies".

The shot was made with a Nikon D7000, shutter speed 1/250, ISO 200, Flash White Balance, with a  Tokina 11-17 lens set to F 7.1. This is only significant because these settings are available to anybody using a modestly priced digital SLR. I mounted a Nikon SB-800 speedlight with the diffusion dome in place. This is not particularly creative light, but since I was working in very close quarters, off-camera flash would not have been a practical approach. On-camera, fill flash would have to do. The camera's built-in flash just wouldn't cut it.

The following images are "right out of camera", with very minor level adjustments to make them easier to see. In other words, uncropped.


Shot #1 was made as a "sketch" to see how the flash was performing. Outdoors, I'm pushing my luck here because the diffusion dome reduces the flash output, but because I was using such a wide angle lens, I could work very close to my subjects and the subject-to-flash distance would be relatively short.

In Shot #3 my subject's expression was wonderful, but the snake is no longer visible.


Shot #4 could have been cropped, but without  the snake's head, there's no reptile context.

I love this little girl's expression in Shot #5, but once again, no real evidence of a snake. Also, the headless Handler might be a little to "spooky" for the paper to use.

Shots #6 - #8 share the same shortcomings. The snake's head isn't visible, but there are some cute expressions.

Shot #9 concentrated on the snake and the Handler. This might do if I was trying to illustrate  their relationship, but this was not where I wanted the image to go.

Shot #10 has some important visual elements.
If I had examined the photo more carefully, I might have had the presence of mind to get the photographer's name. In my opinion, #10 was a good shot by all accounts. But because I didn't get the name, I didn't send it.

I finally submitted a cropped version of Shot #2. I has has an engaged child, a "catchy" tee shirt, the Handler's visible face, and a "recognizable" snake. I liked the simplicity of the shot, and managed to get the young lady's name because this shot was the "front runner" as soon as I saw it.

I look at these last two photos and believe this shot better illustrates "why" a child might enjoy coming to Reptile Day. I don't like the areas of "non-content", or regions that don't add to the viewer's sense of the moment. Shot #10 was very "content dense", but lacked one key element: a child. I believe I submitted the better photograph, but I'll keep a copy of #10 for my portfolio.