Coolpix A, Ya Done Me Wrong!

One morning, I was taken by how the blue sky seemed to peer through the breezeway of my neighbor's home. My own stairwell provided something of a frame for that patch of blue, so I grabbed my Nikon Coolpix A and made some shots. This modestly adjusted photo (Photo #1) was pretty much what I had in mind. But I digress.

The first shot (Photo #2) was Straight Out Of Camera (SOOC). The sky was pretty much where I wanted it, but the walls were too dark (or too light if I wanted something more foreboding). The exposure was 1/500 of a second, F 11, ISO 200.

It seems like I'm pretty much hard-wired to augment all of my photos with flash. And while I could have easily corrected the exposure difference in post-production, I felt flash was the better way to go. Besides, I might learn something new. And I did, but it had nothing to do with flash.

The next shot (Photo #3) was made using an SB-700 aimed directed forward. A few things should be noted. First the color rendition was spot on (the walls are indeed off-white). But notice how the brightness decreases as the strobe to subject distance increases. You can see that the closer left wall is noticeably brighter than the far wall. One other feature is the relative lack of shadows. On-camera flash tends to flatten everything, and I will remember that if that's the effect I'm trying to achieve. The front-to-back variation in brightness does bother me.

When I rotated the flash head and bounced my light (Photo #4), I immediate saw the effects of bouncing from and off-white bounce surface on to the equally off-white background wall, something of a "warm on warm" effect. The light fall-off was are reduced, however, and the shadows, while soft, were definitely there. I was happy with the image until I noticed a dust spot (See arrow)  in the sky.

Bad, Bad, Bad! I had sent the camera off when the first dust spot was discovered, and am now annoyed to find that another seems to have taken its place. I don't remember if I made a test photo to see that Nikon had done what they said (replaced the entire lens unit as it was supposedly sealed and couldn't be cleaned). This make me question whether the designers of the camera took  invasive dust particles into consideration, though it appears they did not. Nikon appears to have been attempting to compete with the then new Fuji X-100 camera (APS sensor, 16 megapixel sensor), and ultimately produced a camera that couldn't cut it. During Christmas 2015, the cameras were selling for less than $300.00, an obvious move by dealers to rid themselves of this white (in my case black) elephant. 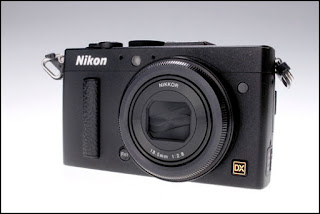 I originally bought my camera used for about $600.00 when the $1,095.00 retail price was still in effect. I felt that was a reasonable price, and so far as performance was concerned, was reasonably happy. It had its shortcomings, but I had intended to use it only as a high sync speed specialty camera to carry just in case my usual DSLRs couldn't hack it. It might still fulfill that role, as it can still do some amazing flash-in-daylight tricks when called to do so. Its 28mm equivalent lens gave it the edge over the Fuji X-100's lens' 35mm equivalent, and that was the main reason I gave the camera a chance in the first place. But now there's that darned spot...

For now, I don't know what I'll do with the camera, since I don't sell off my less-than-worthy equipment. Since the price reached its nadir last year, there's no hope for recovering anything close to what I now have in the camera. Anyway, I find myself shifting slowly towards the Fuji platform, and really liking it. Now I am on the lookout for a WCL-X100 Wide-Angle Conversion Lens,  which gets the nod from a several photographers whose opinion I trust.

Right now, I'm surfing to see if I can find a reasonably priced unit. Once attached, I'll get that high speed synchronization I wanted in the first place, on a camera platform (Fuji) I appreciate more with each assignment.

February 6, 2016: By the time this is published, I will have received my Wide Angle Conversion Lens via eBay. As I have a Chinese New Year's celebration coming up, we'll see how it performs in the field.
Posted by Tom Jung Photography at 12:10 PM