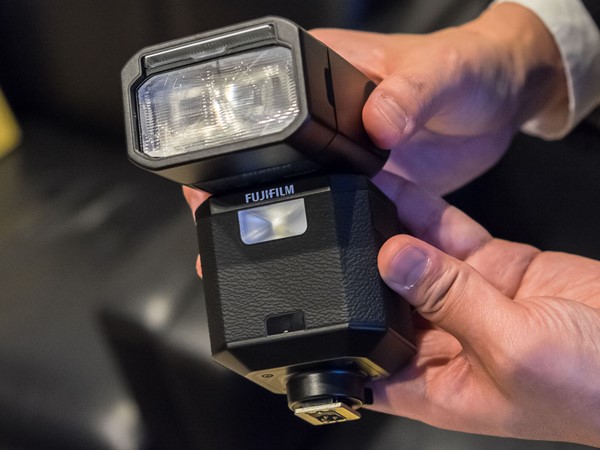 Well, I couldn’t stand it. The possibility of a “professional level” shoe mounted flash was too much for me to resist. When I got the call from Fireside camera that the new EF-X500 flash was in stock, I went down and bought one. Click here to read the factory specifications.

My observations are based on my playing with the unit in my office, although I plan to deploy the unit as soon as the accessory battery pack arrives. There are some useful features, combined with some unusual quirks.

Control Layout: The flash is controlled through a series of three "pages". Pressing the Page Button (Down Arrow, left) allows you to shift from page to page. Each page has a maximum of three options, each with a corresponding button below the option label.


For the record, the photo shows the flash in the Commander Mode, with Groups A, B, and C in the TTL mode with no exposure compensation, transmitting on Channel 1. Selections from within each of the three options is accomplished by rotating the command wheel (Right Arrow, left). Basically, the setup is very similarl to Nikon's Creative Lighting System on the SB-9xx speedlight platform. This is a definite plus, although I doubt I'll make the plunge and go full wireless with my Fuji system.

Next, the Not-So-Good
Now, the Downright Annoying 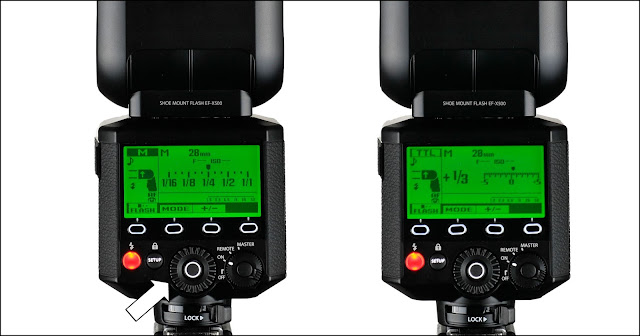 Counter-Intuitive (Manual) Exposure Compensation: Righty = Tighty? This photo shows the EF-X500 in the Manual Output mode (left), which is currently set to 1/4, or one-quarter. Conventional wisdom suggests that a clockwise turn of the selector dial (arrow) would increase the flash output. However, in EF-X500, you rotate the selector dial counter-clockwise instead.

Okay, you can learn to live with this when shooting in Manual. But when you attempt exposure compensation in the TTL Mode, the clockwise/increase relationship is valid, which means that Manual and TTL compensation are at odds with each other. You could learn to live with this, I suppose, but why should we have to? Perhaps there's a firmware update to correct this, but without a data port of some sort, I can't see how this would be possible. 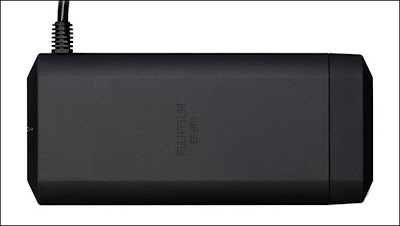 Fuji Battery Pack: My special order EF-BP1supplementary battery pack came before this post's publication date and after my last assignment, so my observations are based on playing with the unit in my office. To the Good:
Build Quality: The overall build quality seems much better than the Nikon SD-9, even though its suggested retail price is $55.00 more than the Fuji.
Removable Battery Tray: The unit takes eight AA batteries, just like the Nikon SD-9. It offers spare battery trays for speedy reloading of fresh batteries, while the Fuji does not, at least for now.
Versatile Case Strap: Unlike the case provided for the EF-X500, the EF-BP1's soft case can be attached to one's belt in either a horizontal or vertical orientation. 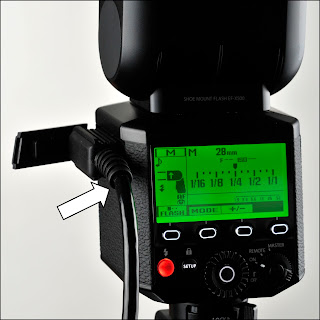 Not So Good: In this photo, you can see that the cord exits the body towards the user. This is minor point, but if you need to make some critical adjustments, that bit of plastic and copper could get in the way. Of course Nikon eliminated by problem by putting the cable interface in the front of the speedlight, so it never gets in the way.

Grumpy Rests His Case: In summary, I did get what I wanted: TTL automation on the Fuji Platform. Fast re-cycle potential with the supplementary battery pack. However, the idiosyncrasies of the unit make for a learning curve steeper that I had hoped for. The backward output adjustments in Manual. The 135 degree left side head rotation. The less than ideal shallow diffusion dome, and the odd-ball accessory mount cover (bezel is what I call it), which may actually be a harbinger of super-cool accessories yet to come, but I doubt it.

Perhaps it's as simple as my clinging to the notion that the high-water mark in flash design was Nikon's SB-800, whose only fault was the limitation of the 180/90 degrees of left/right head rotation. Just about everything else was functional, and intuitive. It also really addressed the needs of real, in the field flash users by providing a diffusion dome and a pair of color correction gels, and an easy way to attach them. All I can do for now is cut some CC gels to size and gaffer tape them to the flash, and hope that the cost of going to a top tier TTL flash with wireless multiple flash automation was worth it.