I was a little nervous about making this shot. Last year, the photo was a little easier to make because I only had three subjects and was working in the historic courthouse in Redwood City, and the venue was much less cluttered. However, I chose to make the photo in the actual exhibit area because of the relationship between the actors and the exhibit, which focused on the lives of these women during the turbulent years of World War II.

I decided to "do as I say" and work from the background forward. I wanted as much background as possible, so my initials shots were with a 17-35mm 2.8 Nikkor on a D600 full frame. I also had my 24-70mm F 2.8, which I would have preferred to use if it was wide enough at the short end.
Base Exposure: This test shot told me that I could potentially hand-hold the shot with a wide angle lens. For now, I decided to leave the ISO alone, and make exposure adjustments as needed. The composition was a little rough, but I cold refine that later.

Controlling The Ambient: Next, I asked about the lights. If I could eliminate the light on the foreground, I could control the foreground with a softbox. Luckily for me, the lights in display area behind me could be turned off, while leaving the background lights on. 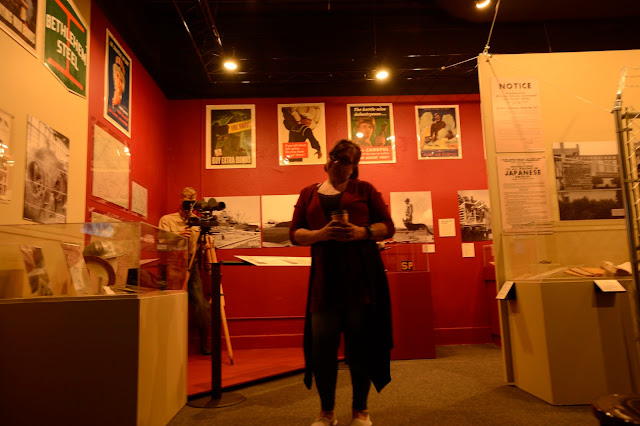 You can see that Cissie has very little light from the front, exactly what I wanted. Lighting would be controlled by the output of the flashes inside my softbox.
Ambient White Balance: By simply changing the White Balance setting to Incandescent, I rendered the background much more accurately. This meant that I would have to gel my flash to match the camera's White Balance Setting. I taped a CTO gel over the speedlight and made another test. 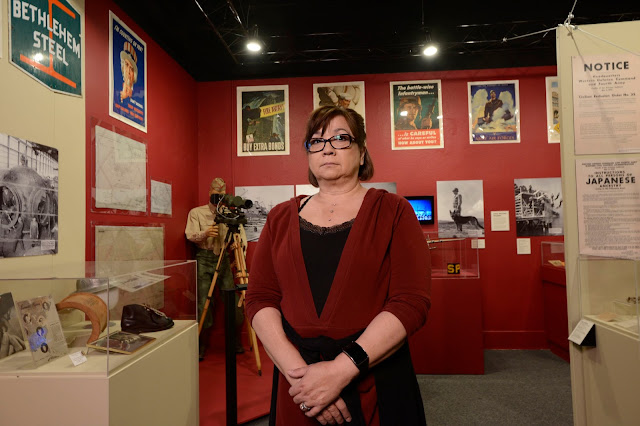 Camera Ready! With the foreground and background balanced, I was pretty much finished at this point. However, the accent lights, seen floating in darkness, bothered me. I had some extra speedlights that could be fitted with grid spots and aimed at the ceiling to give some additional detail in the ceiling. 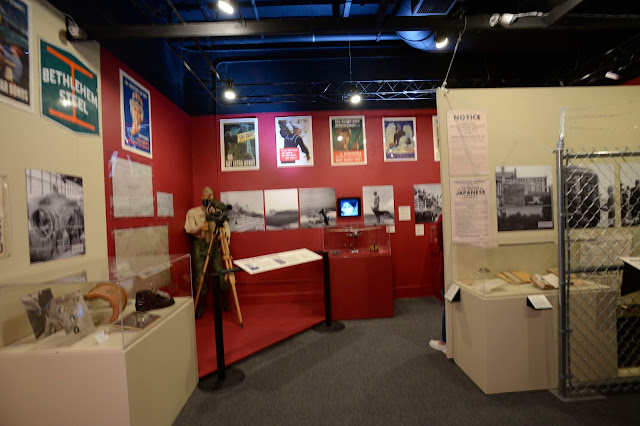 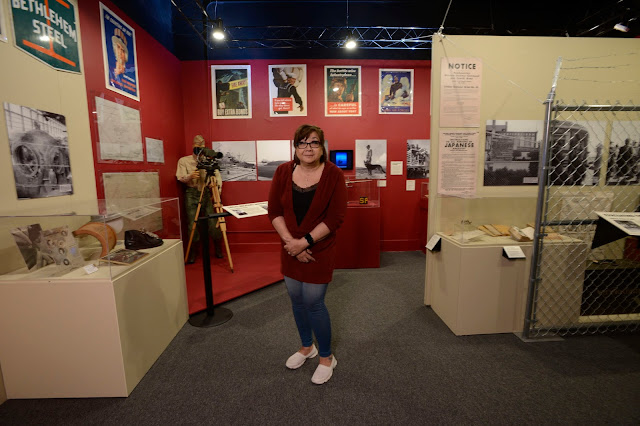 At this point in time, I didn't know exactly how many actors would be showing up. I backup up a bit to study the background if I had five or more players. Lighting look pretty even, but I noticed that the mannequin in the background and the display from an interactive display would be a bit distracting if they were included in the photo.

In the event I had only two or three players, I could easily move the closer to me, and cover the intrusive soldier to boot. I also added a kicker light to provide some separation from the background. You can see it near the left edge of the photo. 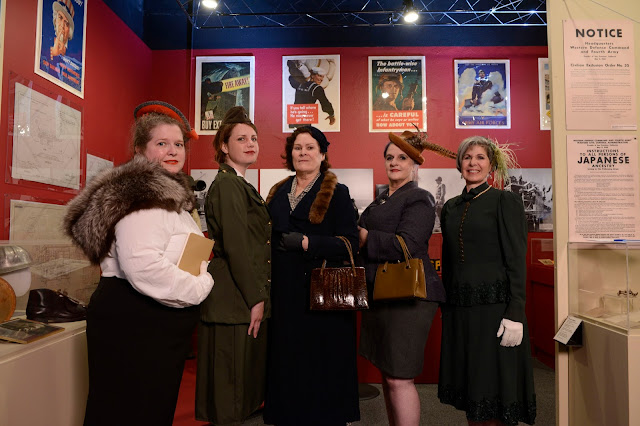 Shots Evolve: When I found out that I'd be working with a group of five, I quickly arranged them as best I could. For this first shot, I wanted to include the ceiling lights I worked so hard to arrange. As a consequence, my subjects were "cut off at the legs". 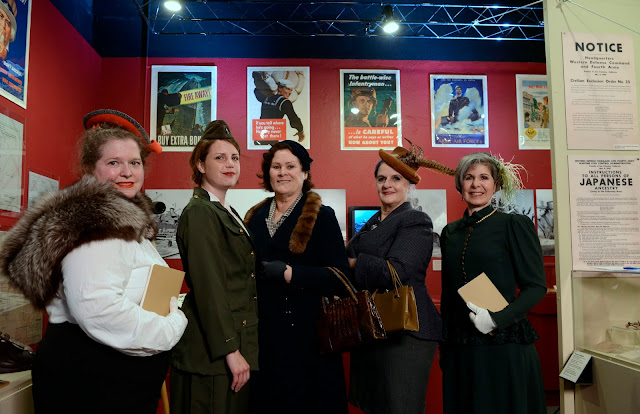 In this alternate composition, I cropped the legs out in an effort to keep the ceiling lights. I had two distractions I needed to address: The video display in the background, and the wayward feather connection the heads of my fourth and fifth subjects. I didn't like the placement of the Japanese evacuation poster at the left edge. I wanted to move it closer to the center of the composition, due to its historical significance. 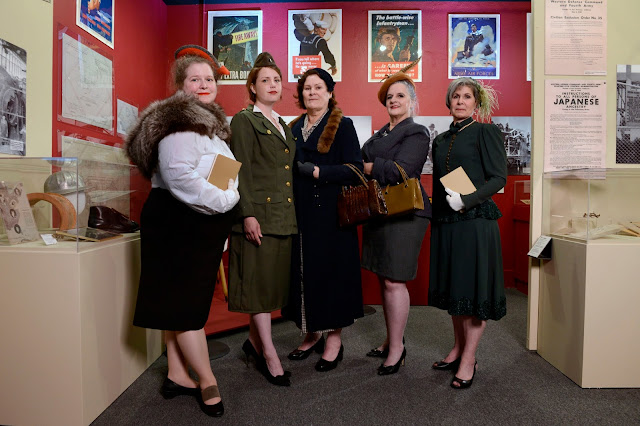 The Final Compromise: With all of the competing visual features in this photo, I recomposed the image to include the legs and eliminate the ceiling. Those "blue" lights were really neat, but the longer skirts of the 1940's added to the suggestion of the time. My fourth subject tipped her hat to the side and eliminated the distracting placement of the feather, but I lost the smile from my fifth subject.

About this time, the public was starting wander in, and my actors wanted to leave so they could put in a few more minutes of practice. I was pretty satisfied with the results, having learned something about mixing unfiltered (blue) flash in an incandescent environment, even though I finally framed the image to remove all evidence of my efforts. It would have been much easier if everybody had arrived at the same time, but this sort of thing is what makes location work so interesting. But when the image was finally published, I found that all of my fretting about the ceiling and the waistlines was all for naught. In a way, it combined the two cropping alternatives (no ceiling, no legs), but I never expected to see both crops applied in this manner.
Posted by Tom Jung Photography at 12:10 PM