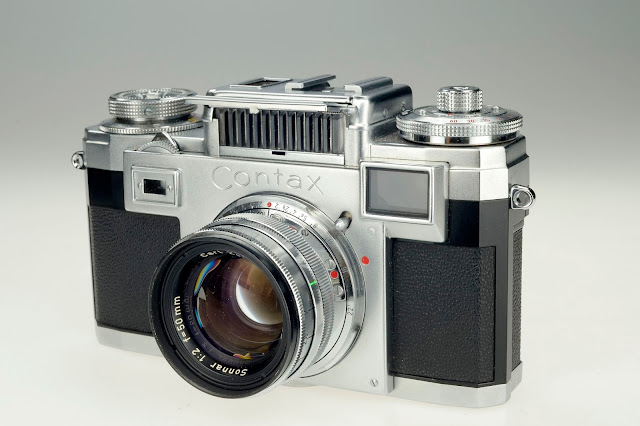 This classic Contax IIIa rangefinder camera, a gift from a family friend. It was her prized possession, and was so protective that she would not allow here (then) husband to touch it, let along make photos with it. It came with original instructions, box, and "never-ready" case, the latter a bit shop worn from the sharp edges of the top plate of the camera. Based on its serial number, its manufacturing date is placed in early 1961, and its overall mint condition makes this camera a rare prize indeed. Safely stored in my camera locker, I take  this flawless mid-century antique out occasionally to just admire its perfection.

Painting With Flash is a technique that is well suited for photographing objects that are highly reflective, such as the Contax. Done properly, the technique can create soft, non-specular highlights, incredible detail, and shadowless exposures similar to those you could achieve using a light tent, but with a much smaller investment in equipment. To make this shot, all you need are:
Lighting Is Cumulative: One quick note before we proceed: Light is cumulative. The shot will be the result of from twelve to fifteen individual flash exposures, each made from a slightly different position. This results in a "smearing" of the specular highlight to cover a larger surface without creating a "hot" highlight. Remember to that this a trial and error process, so it helps to remember how many flashes you had to make when you find the result particularly pleasing. In case you were wondering, Polaroid cameras were employed to check exposure during the pre-digital days. 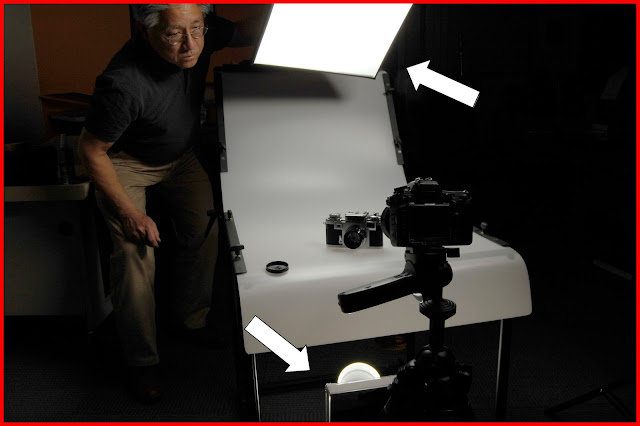 The Setup: This shot was an attempt to show you what's going on in the darkened workspace. In my left hand, you can see a speedlight with a small softbox, triggered by a remote trigger in my right hand (More on that later). On the floor, there is an optically triggered flash with a Gary Fong Cloud Dome aimed to direct light towards the foreground while lighting the scene from underneath. It's partially hidden by a book I used to prevent light spill into the camera mounted on the tripod. And yes, the plane of focus is on the tripod, which explains my out of focus-ness.

The Technique: Painting with a continuous light source, a technique often used by interior photographers, had the photographer use brush-like strokes to put layer upon layer of light on the walls and ceiling,  just as one might do with a paint brush. The process usually involved a photo flood and a long extension cord. But since flash is not a continuous light source, the technique is different. First, I focus the camera in the manual mode, since the camera won't function in total darkness. Next, I position my foot light to where I think it will produce the most pleasing light pattern beneath my subject. I purposely set the output to 1/8 or 1/16 of the necessary output (I'm guessing here) for reasons you'll understand in a moment. Finally, I set my hand-held key light to about 1/4 power to start, set the camera to a 20 second exposure. Now turn out the lights so there is no ambient light to affect the final exposure. 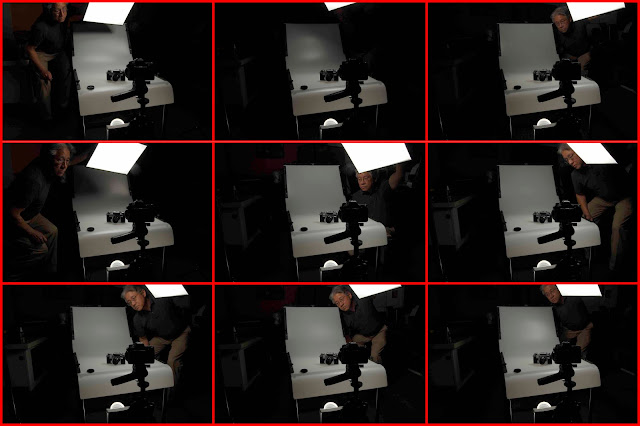 Next, I'll manually trip the camera shutter. I now have 20 seconds to position my key light, trigger it with the controller, and re-position the light about 8 inches from its current location, and trigger the flash again. I'll do this as many times as I can, which means about 15 pops if my key light flash is recycling quickly enough. Each time I trigger my main light, I am simultaneously triggering my foot light, so that after 15 pops, my foot light has given me the equivalent of a full power burst of light. And because I move the key light after each shot, the highlights grow, and flow, into each other, giving me the large, soft highlights I wanted in the first place. 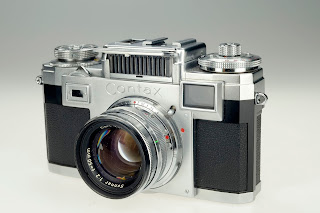 New be forewarned, the results are not always perfect the first time. But with a little practice, you'll start to get photos with plenty of fine detail in the shadows (if you have any) and no burnt out highlights.

If I had it to do over, I put a bit more light on Contax's right side, which is noticeably darker than the left. But overall, the normal glare-prone chrome finish glows more than sparkles, and there is lots of detail in the knurling of the control knobs.

They really don't make them like they used to!
Posted by Tom Jung Photography at 12:10 PM